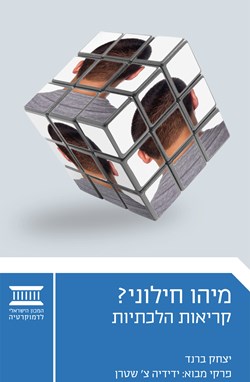 Who is a Secular Jew?

This book explores the halakhic status of the secular Jew, while examining the various categories used to describe secular Jews in the halakhic lexicon. It concludes that the harsh condemnation of secular Jews found in halakhic literature is generally limited to the religious plane; on the national and sometimes social level, however, Jewish law considers secular Jews fully legitimate partners in Jewish life.

This book by Dr. Yitzhak Brand, with introductory material by Prof. Yedidia Stern, explores the halakhic status of the secular Jew, while examining the various categories used to describe secular Jews in the halakhic lexicon. It concludes that the harsh condemnation of secular Jews found in halakhic literature is generally limited to the religious plane; on the national and sometimes social level, however, Jewish law considers secular Jews fully legitimate partners in Jewish life.

Over generations Judaism has been perceived as a single identity complex, intertwining religion and nationality, society and culture. In roughly the past two hundred years, the stitches joining the components of the complex have begun to unravel.

From then on, the majority of the Jews who are interested in maintaining their Jewish identity have put the stress on nationality, society, and culture while not attributing importance to the religious-halakhic components. In previous historical eras the non-observant Jew was one who deviated from appropriate behavior-exceptional in his faith, his attitude to society, and his national affinity. Thus, it was easy to push him, through various halakhic categories, to beyond the community boundaries. In modern times, however, the secular Jew is the normative person. Now, Jewish religious law will find it difficult to define him or her as deviant or exceptional, while he or she is the most prevalent type of Jew.

This difficulty is not exhausted in the field of Halakha, and it involves severe cognitive dissonance in the attitude of the religious people to the secular: On the one hand, in daily life, a large part of the halakhically observant Jews in our generation consider the secular Jew as a normative person, a complete Jew, a partner in Jewish fate, an ally and a brother. On the other hand, in religious life (both halakhic-legal and the intellectual-philosophical), almost all Orthodox observers of commandments, religious as well as Haredim, categorize the secular Jew into the classic halakhic categories that deal with one who is deviant in Torah and commandments: the secular person is an "Epikoros," "a heretic," "an apostate," "an evil person," or at least "tinok she-nishba" (lit., an infant captured by gentiles).

Moreover, the secular person is not just a private person; he or she is also a main player in the public arena. The secular bear the brunt of operating the state domains, its institutions, and its authorities. The secularists are the largest group in the legislature, in the Supreme Court, in the executive branch, the media, and the army. In any event, it is clear that the attitude of the religious people toward the state and the institutions operating within its framework and in the public sphere is influenced by their attitude to the secular Jews. If an individual secular person is considered "evil," it is easy to attribute the characteristic of evil also to the prime minister or to a Supreme Court justice, whose approaches are not accepted by a large part of the religious Jews. The personal dissonance turns into dissonance toward sovereignty itself, its symbols and its actions.

This volume deals with the problem of the halakhic status of the secular Jew-the private individual as well as the public figure. A cautious reading of the contexts in which the harsh halakhic definitions were determined, the ones customarily attributed to the secular individual, inform us that the practical and ideological span for the acceptance of the secularist by a religious person is wider than expected. The halakhic tradition distinguishes between the religious-ritual context and the status of one who transgresses Jewish law in two other contexts: the national and the social. It turns out that the rigid halakhic censure of the secularist is maintained essentially on the religious plane: to relations between a person and his creator. In contrast, on the national plane, and at times even on the social plane, Halakha does not judge the secularist harshly but rather considers him or her a completely legitimate player in Jewish life.

Such a halakhic reading is likely to contribute to reducing cognitive dissonance and to merging the halakhic horizon with the actual social horizon. The natural sense of a common fate between the two groups, on the planes of national and social existence receives authentic halakhic verification. The real figure of the secularist and the halakhic image of the transgressor are consolidated in one figure, even if not a harmonious one.

Dr. Yitzhak Brand is a senior lecturer in Jewish law at the Faculty of Law at Bar-Ilan University and teaches Talmud and Jewish philosophy in various Beit Midrash settings.

Prof. Yedidia Z. Stern is Vice President of Research at the Israel Democracy Institute and is a professor in the Faculty of Law at Bar-Ilan University.