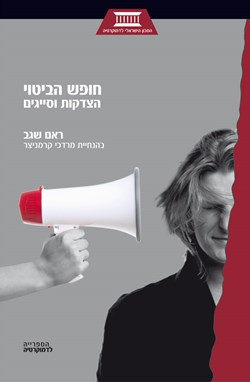 A book that discusses freedom of expression and its relationship to the sound running of a democratic state. Is it justified, in the name of free speech, to impose restrictions on expressions that run the risk of inciting violence, racism, slander, or pornography, infringe on privacy, inflict emotional distress, or hamper the proper functioning of government institutions? Who should regulate this important area of our lives—the “marketplace” or the legal system?

Freedom of expression is a central concept in the public discourse of many countries including Israel. This complex idea includes a wide spectrum of ethical considerations, though fundamentally in favor of permitting statements, even when they are not compatible or in agreement regarding their implementation, and are likely to conflict with other considerations that support placing limits on expression.

Dr. Re’em Segev, the author of the book, believes that when evaluating issues of freedom of expression, the courts must weigh the considerations for and against, while distinguishing among the different forms of expression that may be particularly relevant to the case (notably the content of a given statement, the identities of those expressing or exposed to it, and the circumstances in which the statement was made). The author criticizes the customary method of analysis used by Israeli courts, chiefly because it focuses too strongly on one aspect of the considerations for permitting free speech—the scope of application of these considerations—but does not give appropriate weight to another aspect: how important they are.

The book offers an in-depth legal and ethical analysis of a variety of topics related to freedom of expression, based on a discussion of both the appropriate legal considerations and the customary Israeli legal practice on each subject.

This book is a summary of an extensive project that was carried out for more than a decade under the auspices of the Israel Democracy Institute, in which specific aspects of freedom of expression were examined, with a focus on the justifications for placing legal limits on various forms of expression, as well as the appropriate scope of justified limits.

"Freedom of expression" is a common concept in the public discourse of many nations, including Israel. Nevertheless, it is a complex notion that reflects various considerations and raises many questions related to their content and interaction. This book examines central aspects of the idea of freedom of expression.

This book examines several types of considerations for and against permitting or restricting expressions. One type comprises first-order considerations in favor of permitting, and often even encouraging, expressions, which includes the contribution of freedom of expression to individual welfare and personal autonomy, to ascertaining the truth, and to a proper (democratic) state. A second type consists of first-order considerations for restricting expressions because of the danger that they pose to other interests. A third type includes second-order considerations pertaining to the regulation of the field of expression. In this context, I emphasize that the two main alternatives—regulation of the field of expression by state authorities and by a "free" private market of expressions—create a fear of improper regulation, albeit for different reasons. Therefore, the proper system must combine these two forms of regulation so that each one of them applies to cases where its advantages outweigh its drawbacks.

The common conceptual distinction between prior restraint and subsequent punishment is imprecise. The standard meanings of both terms do not reflect their simple meanings: the standard meaning of subsequent punishment (criminal offenses) does not encompass only rules imposing punishment, in the strict (simple) sense of punishment, but also a preventive aspect; and the standard meaning of the power of prior restraint is not just, and not even primarily, preventive power in the strict (simple) sense. Both types of rules are designed, first and foremost, to prevent certain actions. For this purpose, a similar measure is primarily implemented—the prohibition of certain expressions accompanied by a threat of punishment.

Moreover, the normative argument that subsequent punishment is always preferable to prior restraint is unreasonable; indeed, it is not obvious that it is correct even as a generalization. It is important to emphasize that the question that should be examined is which alternative—power of prior restraint or subsequent punishment—is preferable from an overall normative perspective, and not only from the perspective of the severity of the restriction of freedom of expression. The common view focuses only on the second question, but the important question is the first one, since the conclusion in this regard should be determined not only in light of the considerations in favor of freedom of expression, but also in light of the considerations against permitting an expression. Regarding types of expressions for which the conclusion is that the considerations favoring their restriction outweigh the considerations that favor permitting them—and if, on the whole, all other relevant factors are equal—it is preferable, from this perspective, to take the most effective measures to restrict the relevant expressions. For this reason, if prior restraint, and not subsequent punishment, is the most effective way to deal with such cases, then this is the preferable approach.

The conclusion is that there is not necessarily always a difference between prior restraint and subsequent punishment although there may be characteristic differences between the two types of regulation from the perspective of the likelihood of shaping and implementing a better system. Therefore, the common view that overwhelmingly prefers subsequent punishment for publishing an expression to prior restraint of an expression is unreasonable. There are considerations that favor the typical characteristics of subsequent punishment for criminal offenses, but there are also considerations that favor the typical characteristics of the power of prior restraint. On the one hand, the implementation of the typical procedures of prior restraint by administrative bodies raises a special fear of improper discretion, a fear that exists to a lesser degree when it comes to the enforcement of criminal offenses by the courts. On the other hand, the enforcement of the power of prior restraint is much more effective and, when it is in the form of actual physical restraint, the restriction of freedom is often less severe. Since the distinction between the two alternatives is only based on typical, non-essential characteristics, and given the existence of conflicting considerations even regarding the typical characteristics—the weight of which varies with the circumstances—there is no basis for a sweeping conclusion regarding the question of which alternative is preferable.

This book opens with a preliminary clarification of several concepts. I first present possible meanings of the term "freedom of expression" and emphasize the importance of distinguishing between them; I then examine the distinction between two basic normative terms—"considerations" and "rights"; and at the end of the first chapter, I survey the distinct meanings of two terms that have been widely used in discussions pertaining to freedom of expression—"fact" (i.e., a factual claim) and "opinion" (i.e., an expression of an opinion).

In the sixth chapter, I examine possible ways to normatively regulate the field of expression, particularly, the restriction of expressions, especially by law. Within this context, I discuss, among other things, legal regulation versus regulation through rules of professional ethics; the differences between content-based and consequential restrictions of expressions; the common distinction between prior restraint and subsequent punishment; and the possibility of encouraging expression (freedom of information). In the seventh chapter, I examine the question of whether it is actually possible to effectively enforce legal restrictions of freedom of expression in the age of the Internet, or whether this is a lost battle and, therefore, futile.

In the eighth and final chapter, I analyze the main considerations against publishing several types of expressions and the conflicts created between them, as well as the considerations in favor of allowing and encouraging these types of expressions and, particularly, restrictions of incitement to violence, incitement to racism, defamation, invasion of privacy, offending religious sensibilities, pornography, and disrupting the proper functioning of state authorities (disclosing official information, criticizing state authorities and expressions related to matters under adjudication).