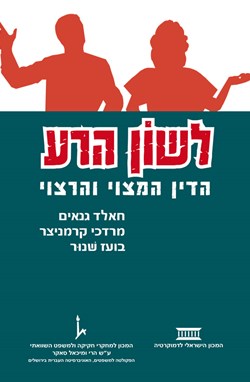 A legal discussion of Israel's libel laws, which were established to protect honor (or reputation) by prohibiting offensive or slanderous speech, while striking a balance between freedom of expression and dignity.

Since biblical times, society has tried to find a balance between the need to cultivate each member’s freedom of expression and the desire to protect the individual's good name. The balance reached by each society reflects a balance between these two values—a balance that is a function of time and place.

In Israel, this balance was established more than 40 years ago, with the passage of the Libel Law in 1965. In the subsequent decades, the law has undergone only a few minor changes. During those same years, however, Israeli society experienced substantive changes. The technology for spreading libel has changed drastically, with the introduction of television (public and commercial) and, more recently, the Internet. The statutory environment in which the Libel Law operates has also changed, following the enactment of additional laws that address related subjects, especially the Basic Law: Human Dignity and Freedom.

During the past 40 years, libel laws have been amended elsewhere in the Western world as a result of similar constitutional, social, and technological changes. These changes justify a fresh discussion of the balance between freedom of expression and reputation. The accumulated experience of enforcing the law demonstrates that there are practical difficulties involved in implementing it, which hinder the achievement of its goals.

In this book, the authors discuss all facets of defamation and the legal methods of dealing with it, as part of an attempt to formulate draft legislation to replace Israel's current Libel Law. Throughout the book, the three authors’ positions are juxtaposed, with explanations of the differences between them, in order to provide a full picture of the options available for an ideal law, and for new interpretation of the current law.

The book includes a critical discussion of the current law and its interpretation by Israeli courts, in light of both the common law and continental traditions. It concludes with draft legislation intended to trigger public discussion of the possibility of replacing the current law with a new law that would reflect the values of contemporary Israeli society. The draft modifies various components of felonies and civil torts, replaces the defenses currently allowed with clearer categories, and adds a suggestion for the preliminary procedures for a damage suit for the publication of libel. The authors’ goal is to modify the current law into something that is accessible and practical.

Tags:
Democracy and technology,
freedom of expression,
freedom of information,
ethics in the media