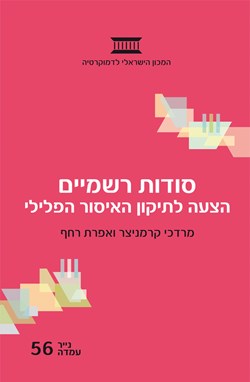 A Proposal for Amending the Penal Prohibition

This position paper aims to investigate the Israeli penal prohibition against disclosure of official information in breach of a public servant's duty to secrecy. The contention of this paper is that the prohibition is untenable in a democratic country, because it limits more than necessary the public servant's freedom of speech and contradicts the public interest to maximize transparency of government's functioning and accountability of officials.

Our contention is that the prohibition is untenable in a democratic country, because it limits more than necessary the public servant's freedom of speech and contradicts the public interest to maximize transparency of government's functioning and accountability of officials. It is also incompatible with the notion of the government as a trustee of the public in taking care of the information it keeps. Moreover, the prohibitions concerning official secrets are laid out in the chapter relating to national security and foreign affairs. This context lends them exaggerated gravity, especially in Israel, where national security considerations are given special importance.

The prohibition, despite its frequent infringement, has scarcely been enforced over the years. However, it was recently enforced when a senior attorney in the District Attorney's office leaked a confidential paper disclosing details of the investigation of Prime Minister Sharon regarding illegal funds he allegedly received (through his son) from a foreign businessman. The leak was made a few weeks before the 2003 election and sparked a public dispute as to its legitimacy. Other recent cases of unauthorized leaks outside Israel culminating in lengthy criminal investigations have emphasized the importance of clarifying the boundaries between appropriate official secrecy and the public's right to know (two such cases occurred in Britain – one involving Dr. David Kelly, the British Foreign Ministry's top scientist, and the other regarding Katherine Gun, a translator for GCHQ; in Finland the newly elected prime minister, while opposition party leader, was put on trial for leaking a confidential document to the tabloids which helped her win the election).

The first chapter of our position paper deals with the penal prohibition relating to official secrecy and its origins. The prohibition is examined in view of interpretive principles of penal legislation, as well as the basic principle of freedom of expression, which took root in Israeli court decisions from the early days when Israel became a sovereign state. It is also compared with the Freedom of Information Law of 1998 and with Basic Law: Human Dignity and Liberty – the most important Israeli constitutional legislation on human rights. The second chapter surveys comparative law on this issue. We review, among others, the corresponding penal prohibitions in Britain, Sweden, Germany and the U.S.A. In the third chapter we discuss the need for a public interest defense for public servants making disclosures in the name of public interest ("whistleblowers"). The fourth chapter deals with implications for disciplinary law, and the fifth suggests an alternative prohibition and a suitable public interest defense.

Penal law makes possible an organized society in which people are able to live safely and peacefully. Penal prohibitions are aimed at protecting important social values. The prohibition against disclosure of information in breach of official secrecy is too broad for such an aim. That is because it doesn't apply only to situations in which the unauthorized disclosure jeopardizes important public interests (for instance, the economy of the state, foreign relations, or the individual's right to privacy), but also to situations in which no harm whatsoever is caused. A prohibition that clearly applies to everyday actions (like a government employee sharing work information with her spouse) turns the trivial into the criminal and by doing so, diminishes the stature of criminal law.

The assumption that no charges will be brought in cases that do not involve harm to the public interest is questionable. History reveals episodes in which information was held secret to save the government from embarrassment. In some of these cases criminal measures were taken against government employees who disclosed information (e.g., the famous case of Clive Ponting in Britain in 1985). It is important to acknowledge that even when investigations do not end in criminal charges, the very fact that criminal steps are taken has a chilling effect on public employees, deterring them from disclosing information about wrongdoings by the authorities. In addition, the gap between the frequent infringement of the prohibition and its lack of enforcement encroaches on the rule of law principle. When the prohibition is enforced it raises suspicions of political motives and of violation of the principle of equality before the law.

A final argument against the existing prohibition is that it weakens the protection of true secrets – information that is justly kept secret. In the words of Justice Stewart in New York Times Co. v. United States (the case known as the Pentagon Papers): "For when everything is classified, then nothing is classified, and the system becomes one to be disregarded by the cynical or the careless, and to be manipulated by those intent on self-protection or selfpromotion." In other words, effective secrecy requires maximum disclosure in order to maintain government credibility. The more narrowly the term "secret" is defined, the easier and better it is protected.

Another problem in the existing law concerns disclosures made in the name of the public interest. Some disclosures can be morally justified since they serve or promote the public good by exposing, for instance, illegality, corruption or danger to public safety or health. Such disclosures can sometimes be justified even if made publicly. The law does not acknowledge that in so far as the criminal prohibition is concerned. The only defenses included in the prohibition relate either to information which had already been made public by lawful authority; or to a disclosure made by a person who had ceased to be a public servant at least five years prior to the disclosure – as long as the disclosure was harmless to the public or to the individual and the information did not relate to national security or to foreign affairs. The latter is a very narrow defense which distinguishes, somewhat arbitrarily, between former civil servants.

Another defense (in § 94) relates to an act made in good faith with intent to bring about, in legal ways, a change in the orders of the state or a foreign state or in the actions of its authorities. This defense is applicable to all offenses against state security, foreign relations and official secrets. It seems as if this might be the answer to the sincere whistleblower, but this defense is fraught with difficulties and has hardly ever been applied. Its major difficulty is its complete focus on the agent's state of mind with no reference to his actions. It implies that even the gravest criminal actions (such as treason and espionage) can be legal if undertaken bona fide. This is unreasonable and incompatible with the aim of criminal law – to protect society from actions that compromise important public interests. A possible way to minimize the difficulties incurred by the problematic wording of the defense is to interpret it as if it contains a demand for proportionality between the damage caused by the agent's actions and the benefits these actions are aimed to produce. The Court not only overlooked that option, but interpreted the defense in the most problematic way, rendering it almost entirely inapplicable.

The legislative history of the prohibition reveals that it is rooted in a British Mandate law that dealt mainly with espionage. This law was a reflection of the British Official Secrets Act of 1911, and the existing prohibition resembles section 2 of that act – one of the most infamous provisions in British legal history. Britain is famous for its tradition of government secrecy – a tradition much opposed nowadays from within. In Britain the law was finally changed; section 2 was replaced by a more modern Official Secrets Act relating to information in specified categories. Israeli law, on the other hand, continues to preserve a most irregular prohibition, of a scope not found in any parallel prohibition in other liberal, contemporary democracies.

In view of the above arguments we believe § 117 must be revised. If such reform is not forthcoming, we offer an interpretive option to minimize its scope on the one hand and to allow a suitable defense on the other. However, the most desirable solution to the problems described above is to get rid of § 117 altogether and to enact in its place a prohibition relating to a public servant who discloses, without lawful authority, information obtained by virtue of his office when the disclosure substantially endangers one of the following: the enforcement of criminal law, foreign affairs, public safety, economic policy or equal opportunities in receiving a privilege from a public authority. A similar but less grave prohibition should be laid out in relation to a government contractor. The proposed prohibition concerning a public servant specifically exempts disclosures made to the police, to the State Comptroller, or to a comptroller in the employee's office. The prohibition does not relate to disclosures compromising national security or privacy. Since the law already grants these interests the necessary protection, there is no need to create overlapping prohibitions in that area.

We recommend that the prohibitions on disclosures be limited by a public interest defense. The defense should apply to a public servant who discloses information with reasonable cause to believe it reveals certain deficiencies. In this context, we believe the defense should discern between two categories of information: one revealing an offense, corruption or danger to public safety, health or the environment; and one revealing mismanagement. The unequivocal value of the former may justify applying it to public disclosures without laying out additional conditions. In the case of revealing mismanagement an additional condition may be added, namely a reasonable cause to believe there was no other reasonable way to redress the malfunction at stake and that the benefit in the disclosure outweighs the damage.