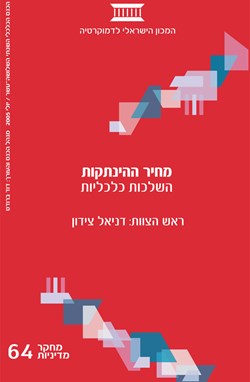 The Price of Disengagement

An analysis of the economic issues expected to arise from the Disengagement Plan and proposed solutions.

What was the actual economic price of the Disengagement from Gaza and northern Samaria? To what extent did the compensation paid reflect the value of the settlers’ lost property? How did it affect the Israeli economy? This study of the economic aspects of the Disengagement aims to answer these and related questions. The first section, which presents an economic analysis of the disengagement, reveals that it could have been implemented at a much lower cost. The second section considers the economic significance of the Disengagement and various ways of funding it. The third section draws on the research conclusions to address three main topics: the future of the western Negev, the possible evacuation of settlements in the future, and the Palestinian economy.

The discussion in this volume, which was prepared for the 13th Caesarea Economic Policy Planning Forum in 2006, is divided into 10 chapters:

The Annual Economic Conference, “The Caesarea Conference,” marks its 13th – Bar Mitzvah – year. We are all proud of this most valuable and important project.

This year, the date of the Conference was linked with events of far-reaching significance, well beyond the planning of the national budget for the coming year. The Conference was held just a few weeks before the implementation of the disengagement plan. The disengagement plan, which definitely affected the relationship between the economy and politics, was naturally a central topic at the Conference this year.
An additional unique feature of this year’s Caesarea Conference is that it was held exactly twenty years after the approval of the economic stability plan. That is why we decided to mark this event by adding a festive session reviewing the past while looking towards the future.

The first topic which the Conference discussed was “The Economic Implications of the Disengagement.” Heading the team was Prof. Daniel Tsiddon, head of the Project for Strategy and Business Development at Bank Leumi, and lecturer at the Eitan Berglas School of Economics at Tel Aviv University.

The second topic, “The Balance of Powers in the Budgetary Process,” was led by Prof. Avi Ben-Bassat, Senior Fellow at the Israel Democracy Institute and lecturer in the Economics Department at the Hebrew University of Jerusalem, and Dr. Momi Dahan, Senior Lecturer at the School for Public Policy at the Hebrew University of Jerusalem. Their analysis and recommendations are different in nature from the recommendations of the other teams in that they rely on in-depth research which was based on an extensive comparative study. The subject itself has come up numerous times in recent months, and we believe that the time has come for reform in the national budgeting process. We believe that the conclusions of this serious research, which will be published in a separate book, could launch the process for such reforms.

A team under the direction of Mr. Eli Hurvitz, Chairman of the Board of Directors of the IDI and Chairman, of Teva Pharmaceutical Industries Ltd., worked on the third subject, “Small Market - Global Economy.” We considered this discussion an opportunity to continue the fundamental process of strategic, long-term planning, and, in the future, we will consider the possibility of continuing discussions on this subject at the 14th Annual Economic Conference.

The fourth and final subject is a traditional topic at the Caesarea Conferences, “Macro-Economic Policies,” this time regarding the 2006 budget. The team, headed by Prof. Rafi Melnick, Dean of the Lauder School of Government at the Interdisciplinary Center (IDC) Herzliya, presented an analysis of the economic policy for continued growth and market recovery.

I would like to express my deepest thanks to the team leaders and their members for the great effort they have invested. A special thanks, on behalf of us all, goes to Mr. David Brodet, who handled all of the preparatory work for the project.

The Price of Disengagement: Economic Implications

The first session of the Thirteenth Annual Economic Conference, “The Economic Implications of the Disengagement,” dealt with the research of Professor Daniel Tsiddon. It was only natural that the discussion touched on the political realm as well, yet most of the speakers succeeded in limiting their critique about the research to economic aspects.

Afterwards, he discussed the question of the economic implications for the State of Israel should the disengagement process be cancelled. His conclusion was that the non-implementation of the plan would lead to political instability, which, according to studies, would lead to a drastic decline in economic growth. Professor Tsiddon drew attention to the phenomenon that governmental bodies did not define this project, which had been defined as a national program, as high priority. During the study it became clear that every government ministry and body looked out for its own interests first, and only afterwards to promoting the planning for the disengagement plan, which led to an increase of between NIS 500 million and 1 billion to the cost of the program. The success of the implementation of the plan should in fact be credited to the Director General of the Justice Ministry, who was merely supposed to have been an aide in the planning process. Later on in the discussion, Israel Oz and Dan Propper confirmed Professor Tsiddon’s conclusions regarding the slow pace of the government ministries in planning the relocation of those evacuated and the economic implications of this massive undertaking.

Finance Minister Benjamin Netanyahu dismissed the assertion that the disengagement plan would lead to improved growth in the Israeli market, since the security situation was liable to get worse after the plan’s implementation, in which case the state of the market would worsen. Other speakers identified with this position, including Dr. Baron Weiman from the Professors for Political and Economic Strength, and Ben-Zion Zilberfarb.

The Director General of the Prime Minister’s office, Ilan Cohen, asserted that, taking into account the difficult circumstances and the many pressures that were brought to bear, the additional cost of the plan’s implementation that Professor Tsiddon indicated was not significant. In addition, the inter-ministerial cooperation was, in his opinion, satisfactory.
Nevertheless, Mr. Cohen agreed with Professor Tsiddon’s position that the disengagement is not a dramatic macroeconomic event, and not carrying it out could indeed severely harm Israel’s economic growth.

MK Avraham “Beige” Shochat spoke mainly about the positive changes that the Knesset Committee introduced into the Evacuation Compensation Law: extending rent payments from half a year to two years, and decreasing the percent of depreciation in compensation to farmers. He criticized the government’s decision to set up the “caravilla” [large caravan] site and to agree to the demand of the settlers to establish a new regional council that would serve as a substitute for the Regional Council of Hof Aza (the Gaza Shore), asserting that these decisions were not economically correct and would be an unnecessary economic burden. MK Avshalom Vilan noted that the more the process for setting compensation is prolonged, the larger the amounts of compensation will grow, at times for no justified reason.

Justice Minister Tzipi Livni raised the question as to whether the disengagement plan is also an economic disengagement from the Gaza Strip. In her opinion, despite the desire of the Israeli side to reach a full economic disengagement between the State of Israel and the Gaza Strip, it is not possible, given the present situation, because of the Egyptian opposition to unrestricted land passage between the Sinai Peninsula and the Strip, and the lack of a solution to the problem of non-contiguity between the Strip and Judea and Samaria. Minister Livni is certain that the Nitzanim plan, which presents a communal solution to the evacuated settlements, is ideal, economically, and that the amounts that the Evacuation-Compensation Law offers are suitable.

Yoram Gabbai continued Minister Livni’s line of reasoning about the chances for economic disengagement from the Gaza Strip. In his opinion, the plan does not contend with the issue of economic relations with the Strip “the day after.”

Deputy Prime Minister Shimon Peres expressed the opposite position to that of Livni and claimed that the disengagement plan should not include the economic disengagement from the Gaza Strip. The passage of merchandise and workers should be encouraged from the Strip to Israel and to Judea and Samaria, in order to improve the economic situation in the Strip. Only in this way will it be possible to strengthen the moderate forces in the Strip and improve the chances for calmness in the region.

Professor Yedidia Stern, of the Israel Democracy Institute, noted two essential aspects concerning the conducting of the deliberations. He expressed doubt about the ability to quantify and measure the economic impact of the implementation or lack of implementation of the disengagement plan. There is no way to quantify a factor such as damage to the productive capability of a sector which feels itself alienated from society. In addition, as a result of the controversy revolving around the issue of disengagement, more and more do we witness the phenomenon of the undermining of the concept of rule of law by a political concept of justice. There is no doubt that the continued undermining of the rule of law in Israel, from the right and from the left, will damage the economy.

MK Nissan Slomiansky said that the Nitzanim Plan is the minimal compensation that the State must give the evacuees. He added that, since this is an enforced evacuation and not one done willingly, the evacuees must be given compensation beyond the actual value of their assets.

Defense Minister Shaul Mofaz asserted that, while the plan did not originate from economic motives, there is great potential for economic dividends from its implementation. If the disengagement will lead to a security calm, both the Israeli economy and the Palestinian economy will grow at a higher growth rate than in recent years.

Professor David Brodet summarized the session and stated that most of the speakers agreed on the extent of the plan’s cost (NIS 7-8 billion), and that this one, single expenditure is not a macroeconomic event. As for compensation, the slow pace of management stemmed from the fact that the representatives of the evacuees generated difficulties all along the way, out of motives of ideology and self-interest. From his experience as a senior administrator in the public sector, Professor Brodet thinks that Professor Tsiddon’s criticism about lack of inter-ministerial cooperation is exaggerated. He agrees with Professor Tsiddon’s negative economic scenario concerning the non-implementation of the disengagement plan. As noted by Minister Livni and others, Professor Tsiddon’s research lacks the aspect of the mutual economic relations between Israel and the Palestinian Authority following the disengagement plan.