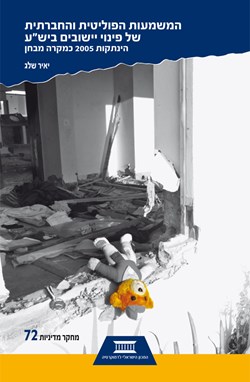 The Political and Social Ramifications of Evacuating Settlements in Judea, Samaria, and the Gaza Strip (Hebrew)

Disengagement 2005 as a Test Case

In this volume, IDI Research Fellow Yair Sheleg discusses controversial issues surrounding the implementation of the Disengagement Plan: the decision-making process regarding the evacuation; the form of compensation; the process of rehabilitating the evacuees; the participation of IDF soldiers in the evacuation; protest actions by opponents of the evacuation; and the attitude of law enforcement agencies toward these activities.

The author explores the issue from two perspectives: one focuses on the past and explores the process that the State of Israel underwent in 2005, while the other is directed toward the future, and aims to learn lessons from the disengagement that will help define to delineate guidelines for managing evacuations plans in the future, if necessary.

In the summer of 2005, Israeli society, no stranger to tough external conflicts, was faced with one of the most significant internal predicaments in its history – the evacuation of 8,500 Israelis from 21 settlements in the Gaza Strip and Northern Samaria. This was, of course, a traumatic occurrence, first and foremost for the evacuees themselves, but also for their friends and ideological supporters, in that it combined three forms of hurban (destruction): ideological destruction, of the faith in
Israel's need and right to maintain its hold over the evacuated areas; personal destruction, of the individual homes reduced to rubble after the many years of love and toil invested in them; and destruction, or at least a mortal blow, to the evacuated communities.

For the same reason, the chapters are divided along thematic rather than chronological lines, based on the major issues that emerged from "Disengagement 2005", in an effort to study these issues in depth and derive lessons from them for the future. The topics are as follows: the form and content of the decision-making process surrounding the evacuation; the debate over the nature of the compensation (its amount and whether it should take the form of money or alternative settlements); the involvement of the army in the act of evacuating civilians, particularly since Israel's IDF is a "people's army" whose conscripts include opponents of the disengagement; the nature of the protests carried out by opponents of the evacuation, and the attitude
of law enforcement bodies toward the protesters' activity; the status of the evacuees two years after the evacuation, and an examination of the rehabilitation process in general; and the impact of the evacuation on various sectors of the Israeli public: Haredi (ultra-Orthodox) settlers in Judea and Samaria, who will be facing the threat of evacuation in the future; religious Zionists, who constituted the bulk of the evacuees, as well as the majority of the opponents of disengagement; and Israeli society at large. Lastly, because Israeli society has undergone two further traumas since the evacuation that are relevant to the relationship between the religious Zionist community and society as a whole – the clash in Amona in February 2006, and the Second Lebanon War in July of that same year – the effect of both these events on trends that evolved following "Disengagement 2005" was also examined.