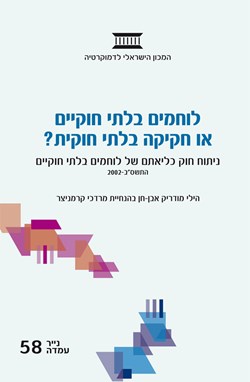 On the Unlawful Combatants Law 2002

Is the Unlawful Combatants Law consistent with the limitations of Israel’s Basic Laws and the principles of international law? This policy paper studies this issue and offers recommendations for adapting the law to the demands of the two legal requirements.

Is the Unlawful Combatants Law consistent with the limitations of Israel's Basic Laws and the principles of international law? This policy paper studies this issue and offers recommendations for adapting the law to the demands of the two legal requirements.

This position paper has been prepared in the framework of an Israel Democracy Institute project dealing with the ways in which a democracy can combat terrorism. The paper deals with the Incarceration of Unlawful Combatants Law 2002, which was enacted in order to provide the government of Israel with additional tools in the war against terrorism. The law was not drafted specifically as a response to the current intifada, but was originally intended to provide tools for dealing with terrorists who are defined by Israel as foreign 'unlawful combatants.' However, it may be equally relevant during the intifada as well, by providing Israel with a legal framework for dealing with those who dispatch suicide bombers and with other terrorists who attack the civilian population. The paper’s authors examine the degree to which this Law conforms to both international law and the norms of Israel’s constitutional law. The authors contend that the Law does not respect the limitations imposed by Israel’s Basic Laws which seek to insure minimal interference with human liberty, and are also inconsistent with the conventions of international law. Consequently, they offer recommendations for adapting the Law to the demands of the two legal requirements.

The paper’s first section examines the Law’s conformity with international law. The authors conclude that the term ‘unlawful combatant’ is inconsistent with the norms of international law. They insist that an attempt to adapt Israeli legislation to the principles of international law will obligate Israel to choose between one of two definitions for those imprisoned pursuant to the Incarceration of Unlawful Combatants Law: they must be defined either as combatants entitled to be treated as prisoners of war, or as protected persons who have assisted in acts of espionage and sabotage and who may therefore be indicted. The authors point to the problems involved in using either one of these definitions.

The first definition, treating the prisoners as combatants, gives rise to three difficulties:

The second definition (of prisoners as civilians) would imply that if detainees continue to be held after they have served their sentences, they could, under international law, be considered to be hostages Such a situation might leave Israel unable to prevent the return of such activists to their organizations.

The second section of the position paper deals with the degree to which the Law conforms to the requirements of Israeli constitutional law. The authors have determined that the Law is inconsistent with the limitations imposed by Israel’s Basic Laws, which seek to ensure minimal infringement of human liberty. The paper examines the Law’s specific procedures and points out their constitutional and legal defects with regard to the following topics: the permissible grounds for incarceration, the competent authority approving the incarceration, the duration of detention before trial, judicial review, rehearings, evidence and the rules of evidence, criminal procedures and the application of the Law.

The authors' recommendation is that the Incarceration of Unlawful Combatants Law be revoked and replaced by the implementation of the Emergency Powers Law (Detentions) 1979, which deals with administrative detentions. The latter law, despite the problems implicit in it, has two advantages: First, it allows the government to refrain from defining the members of terrorist organizations within one category or another, and thus it confronts the difficulties of reconciling the Incarceration of Unlawful Combatants Law with the principles of international law; second, it allows the government to prevent the release of hostile elements who endanger national security, in situations in which it is impossible to deal with the risk within the framework of penal law. Alternatively, and on the assumption that the Law will not be revoked, the authors examine its specific procedures and propose ways in which they can be corrected so that they will comply with the restrictions imposed by Israeli constitutional law.

The authors point out general considerations that strengthen the argument that the Law should be revoked. In discussing the issue of whether the Law complies with applicable constitutional restrictions, the authors carefully examine each section of the Law relating to the limitations clause in Israel’s Basic Law: Human Dignity and Liberty. The primary test examined by the authors is whether the means employed in the Unlawful Combatants Law will involve the least possible infringement of the rights guaranteed by the Basic Law. The authors establish that none of the Law’s sections meet this standard; furthermore, the Law in its entirety fails the constitutional requirement that the means used must be adapted to a law’s purpose. It is unclear whether the methods that are permitted pursuant to the Law are indeed effective in terms of dealing with a terrorist organization; the incident of the Lebanese captives is cited in order to prove this thesis. The goal of securing the release of the Israeli navigator Ron Arad, or of receiving information with regard to him, was not achieved through the taking of these captives. Moreover, events have shown that Israel’s capture or holding of such hostages has provided the other side with an incentive to kidnap Israeli soldiers or civilians, as proved by the kidnapping of Elchanan Tennenbaum. A kidnapping of this kind forces Israel to release terrorists, and this creates direct and indirect risks in terms of terrorism and weakens the ability to deal with terrorist organizations.

Furthermore, the Law promises nothing with regard to the legality of its purpose. Whether Israel would be willing, in accordance with the Law’s provisions, to exchange detainees for Israeli prisoners or abductees is doubtful. It is also unclear as to whether the purpose of the Law is to detain the members of illegal organizations until the termination of hostile operations directed against Israel by the organizations to which they belong. Indeed, dangerous terrorists are currently not detained in accordance with this Law. Instead, they are held in administrative detention, the purpose of which is clear: to prevent a person, against whom there is evidence proving his danger to national security, from carrying out hostile intentions.

The Law also employs measures that reduce the degree of judicial supervision over the process of incarcerating unlawful combatants, specifically at a time when there is no good reason for its restriction. In addition, the Law encourages the detention of those merely suspected of membership in an illegal organization, instead of encouraging proper investigations and finding evidence to support an indictment. Given that even with regard to the matter of a detainee's membership in a hostile organization there is no requirement that solid proof be presented – a document signed by the Minister of Defense is sufficient – it is likely that in the end, the Law will allow the incarceration of individuals who are not even passive members of hostile and illegal organizations but merely supporters and followers. There is a danger that weak evidence (such as the abovementioned document signed by the Minister of Defense), which is not supported by other evidence, will lead to the detention of those who are wrongly believed to be members of illegal organizations – such incarcerations could take place in good faith or on the basis of erroneous or insufficient information. Such considerations, along with the defects noted above, strengthen two conclusions: the Unlawful Combatants Law should be revoked and the Administrative Detention Law should continue to be implemented in order to arrest individuals who endanger national security in situations in which the penal law cannot be applied.