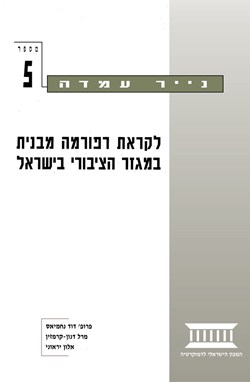 This policy paper proposes reforms that are designed to adapt Israel's administrative structures to modern democratic principles and a free-market economy. Based on comparative data, the proposed changes are motivated by a desire to improve the efficiency of the executive branch toward both the public and its representatives, to streamline the public sector, and to bring Israel to a standard comparable with the most progressive of Western democracies.

As Israel approaches the twenty-first century and the fiftieth anniversary of the establishment of the state, we must evaluate afresh the organization of government and adapt it to the changing needs of the state. The government, characterized by centralization and power localized in the bureaucratic systems and traditional methods of administration and government, is not meeting the needs of the State of Israel and may even be impeding the state's development. Since its establishment, Israel has not carried out meaningful reforms in public administration. The basic principles of administration in a democracy -- responsibility, authority, and accountability - have become devoid of content.

The reforms proposed here constitute an attempt to forge a meaningful change in the current situation and to accelerate reform processes in other areas. They are designed to adapt administrative structures to modern democratic principles and to a modern free-market economy. They are motivated by a desire to improve the efficiency of the executive branch toward both the public and its representatives, to streamline the public sector, and to bring Israel to a standard comparable with the most progressive of Western democracies. The proposed reforms are based upon the experience of a number of Western democracies, including England, Sweden, the United States, Australia, New Zealand, Holland, etc., which have implemented reforms in government and public administration. The reforms reflect a growing recognition that the size of the public sector and the breadth of public spending influence the economy's growth and its ability to cope with competitive international markets, and that there is increasing and widespread dissatisfaction with the quality of public services. Two mutually incompatible trends -- a desire to cut back on spending, and a demand for better services -- have produced a renewed interest in a more advantageous division of labor between the public and private sectors.

The present fiscal crisis in Israel's local authorities is a national problem with far-reaching consequences affecting the physical conditions under which Israelis live and the ability of local authorities to supply adequate services.

Local authorities act as subcontractors in the Israeli democracy, subject to direction and regulation, and carry out the tasks assigned to them by the central government. At the same time, they are democratically elected authorities with the obligation to serve their citizens and the responsibility to account to them. But this leads to an impossible situation: local authorities are subordinate to orders from above, yet must win the confidence of their constitutents.

The solution is to wrest power from the central government, grant a certain degree of autonomy to local authorities in the areas of their competence, including the freedom to decide how to carry out this responsibility. The assumption is that decentralized government is better able to realize political, economic and administrative values. But decentralization is not a miracle cure; the appropriate balance must be achieved between central and local authorities.

Knesset Committees wield great power in terms of the legislative process, but they do not manage to exercise their oversight powers. Under the system of direct election of the prime minister, and as a complementary measure to the reform of the executive branch, we must strengthen the oversight capacity of the Knesset and make the national budget process more efficient by redefining the role of Knesset committees and the role of the Knesset itself within the Israeli political system.

What little power the Knesset has to affect the national budget is limited to the Finance Committee. The transition to budgeting according to output and the need to decentralize the budget process make increased involvement on the part of Knesset committees an imperative.

Implementation of the Reforms

This position paper presents a model for the systematic implementation of the proposed reforms. Its guiding principle is the redistribution of responsibility, the separation of policy-making and oversight from implementation and execution. The model categorizes government activity as business or non-business, activities which are best suited to centralization or decentralization, etc. Using these categories, the model proposes a new division of labor between the public and private sectors and between elements within the public sector.