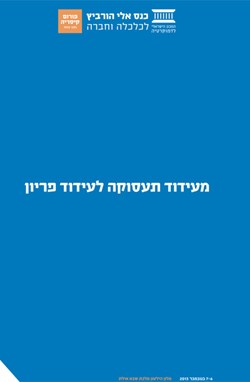 From Encouraging Employment to Boosting Productivity

Entitled From Encouraging Employment to Boosting Productivity, this Hebrew booklet was prepared in advance of the conference by a working group of researchers who explored the subject of macroeconomics. An English abstract can be found below.

According to demographic projections by the Central Bureau of Statistics, the proportion of Arabs and Haredim (ultra-Orthodox Jews) in the population will increase from 30% in 2009 to 50% in 2059. The two populations are characterized by a low level of participation in the labor market, a low number of hours per employee, and low productivity. The demographic changes imply a substantial structural change in the Israeli economy in light of the lower participation patterns of these sectors in employment and education. The numbers cited above mean that the growth rate of the non-Haredi Jewish population of prime working age is expected to drop from 1.8% per year during the past decade to 0.4% during the next two decades. Starting in 2003, the government implemented a series of measures based on the approach known as “from welfare to work,” combining cutbacks in child allowances and increased support for daycare facilities.

Subsequently, in 2008, a program of supplemental income grants was implemented for low-wage workers (“earned income tax credit”). Since then, the employment rates of Arabs and Haredim have risen significantly more than that of non-Haredi Jews. However, the former are typically employed in fields characterized by relatively low wages and a dearth of human capital. Thus, the massive entry of Arabs and Haredim into the labor market was accompanied by a widening of wage disparities: The average real wage of Haredi men even declined during the years 2004–2011. This picture reinforces the recognition that while entering the workforce is indeed an essential condition for improving the situation of these groups (relative to a situation of dependency on transfer payments), it is not a sufficient condition for ensuring ongoing improvement in productivity.

The team reached the conclusion that despite the success in boosting employment figures, the stage of integrating Arabs and Haredim in low-wage jobs did not enable these sectors to catch up to the rest of the population and thus should be seen as an intermediate stage. The team emphasized the need to move on to a more advanced stage based on integrating these groups in fields that offer higher added value, characterized by higher human capital and wages, such as the branches of technology.

With this goal in mind, a new program is recommended for the Arab and Haredi sectors—“from employment to productivity.” The new program requires a change of perspective in the utilization of policy tools: The emphasis should be on increasing productivity. A salient factor underlying this program is the low participation in higher education among the Haredim and Arabs relative to the non-Haredi Jewish population. In fact, the disparities in education are even more extreme than in the field of employment. Non-Haredi Jews receive matriculation certificates at much higher rates than the other two populations; and in regard to academic degrees, the ratio is 4 to 1 vis-à-vis Haredim and 3.2 to 1 vis-à-vis Arabs.

The proposed program includes, among others, the following measures: