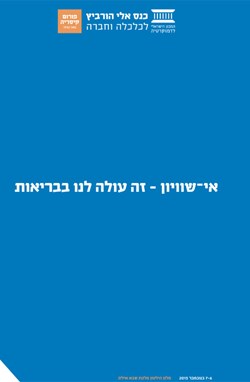 Inequality: It’s Bad for Our Health

Entitled Inequality: It's Bad for Our Health, this booklet was prepared by a team of researchers for the conference's session on health.

Health is a fundamental right of every human being and it is an essential resource that contributes to the prosperity of the individual and the development and growth of the society. The National Health Insurance Law, founded upon "principles of justice, equality, and mutual assistance," seeks to ensure equality in the availability, quality, and accessibility of health services. However, this does not guarantee actual equality in these aspects or in the health status of the entire populace. Along with many countries, Israel joined the World Health Organization's Ottawa Charter, which calls for "Health for All.

A combination of factors at the individual, community, and societal levels, and at various stages over the life-course, contributes to the socio-economic inequalities in health. These inequalities are only partially attributed to the lack of material resources and problems of accessibility or infrastructure of health services, as the production function of health does not only depend on input from the health system, but also on many external factors.

The Economic Cost of Health Inequalities

Poor health has an economic cost: lower employment, growth, and productivity; a direct cost to the social welfare system; and harm to the wellbeing of the population. An initial calculation of the economic costs of the health inequalities in Israel is based on costs linked to early death (a social value), on the loss of work days, and on the costs of medical care. This calculation indicates a very significant economic burden—about 7% of GDP, a sum that is just slightly below the national expenditure on health. A similar calculation conducted in the European Union showed a similar percentage.

The Barriers to Narrowing Inequalities in Health

Despite the potential economic benefit associated with narrowing health inequalities, there are numerous barriers preventing tackling the problem: lack of awareness of the scope and consequences of health inequalities for the society and the economy; lack of an integrative perspective shared by the investing organization (for example, the HMO) and the organization that receives the return on the investment (for example, the social welfare system); a significant time gap between the dates of investment and return; lack of awareness regarding the prices; and the need for a substantial initial investment.

Ways to Narrow Inequalities in Health

It is not possible to completely eliminate inequalities in health, but it is possible to narrow them. The awareness of socio-economic inequalities in health has increased in Israel during the past decade and, as a result, dedicated activity has been initiated to reduce them. However, these activities are still limited. Activities should be based on changing the factors underlying the inequalities. Therefore, comprehensive action is required that combines the forces of the health system with other support systems (social welfare, education, and more), as well as collaboration with the business sector and the third sector in order to achieve an ongoing and sustainable reduction in inequalities.

Tools incorporating assessment and evaluation should be developed to help translate the overall economic benefit to be derived from narrowing the inequalities as a result of investment in suitable interventions. Possible approaches include:

Spending on health is an investment that yields positive returns for the economy. Inequality in health has a price, just as there is a price to inequality in income. Improving the health of the weaker segments of the society will lead to an increase in the average level of health in the population, will bring additional groups into the work force, and increase economic growth.