Which terrorist did the most damage to Israel’s security in the course of the “stabbing intifada” that began in the fall of 2015?

About 40 Israelis were murdered during the spate of knife attacks, yet the most successful terrorist did not kill any of them. During this wave of violence, terrorists wielding knives charged at civilians and soldiers, drove vehicles into crowds full of innocent passersby, hurled rocks with the intent of shattering skulls and engaged in many other abominable acts.

But the terrorist who inflicted the most damage did so while lying passively on the ground.

During the stabbing intifada, about 150 terrorists paid with their lives for committing murder. Yet they did not achieve any real goal, despite inflicting grave suffering upon their victims. Only one of them—the most destructive terrorist—succeeded beyond his expectations in carrying out his mission. 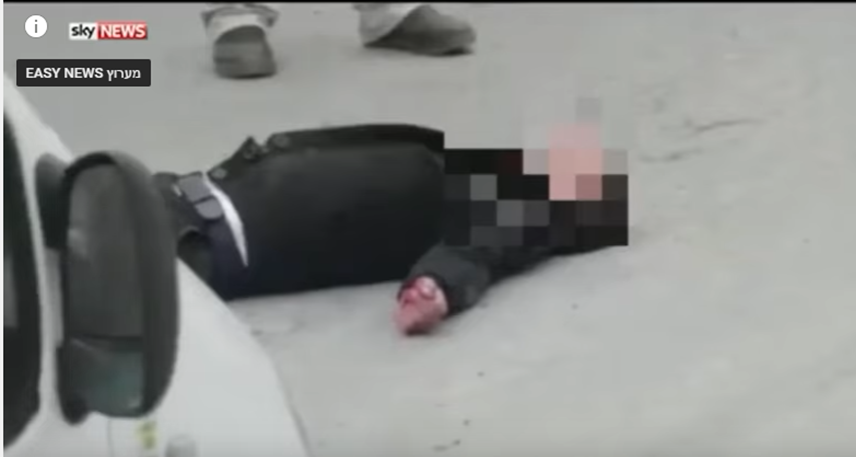 It is almost certain that readers of this article will not recognize the name of this man, the terrorist who caused more damage to Israel’s security than any other attacker in recent years. He was not a terrorist celebrity. There was no flashy operation, launched by security or military forces, to track him down. He did not carry out a meticulously planned attack, nor did he inflict any significant physical damage.

His name is Abdel Fattah al-Sharif, 21, from Hebron.

Al-Sharif’s unusually successful career in terrorism began while he was critically wounded, in Tel Rumeida. Without moving an inch, he managed to inflict a mass attack against Israel’s security, in the deepest sense of the term. Al-Sharif lay on the ground. Israeli soldier Elor Azaria shot him. As it stands, the soldier has far more name recognition than the terrorist. A photographer caught the episode on video…and we all know the rest of the story.

To correctly assess the extent of the damage here, one must first understand the motivation behind committing acts of terrorism. A lone terrorist, charging at people with a knife in hand with the hope of killing as many people as possible, is impelled by several possible motivations—religious, nationalist and personal.

But the objectives of terrorism, as a system, are much broader. Terrorism employs violence to achieve political aims: to weaken the solidarity of the society under attack, make it doubt the justice of its path, undermine the legitimacy of the establishment and ultimately overturn the existing political structure.

From this perspective, al-Sharif, the terrorist from Hebron, pulled off an especially high-quality strategic attack. He succeeded in creating a major rift between rank-and-file Israelis, on the one hand, and the defense establishment on the other. About two-thirds of the Israeli public believes that Israel Defense Forces (IDF) Chief of Staff Gadi Eizenkot and former Defense Minister Moshe Ya’alon mishandled the incident when they condemned the shooting of the wounded terrorist.

For the first time, the IDF—Israeli society’s ultimate sacred cow—was slashed by the sharp and dangerous blade of public opinion.

Ya’alon was undermined, and he was eventually replaced. Five former IDF chiefs of staff were forced to stand up for Eizenkot to buttress his public position. The terrorist from Hebron succeeded in inciting Jews to threaten to murder the chief of staff.

Moreover, the Hebron incident dramatically exposed the fragility of the Israeli consensus regarding the basic values to which the Jewish state’s society is committed. Israel’s core narrative—about purity of arms and moral superiority—suffered a critical blow, not only because of the actions of the soldier, who was convicted of manslaughter, but primarily due to the groundswell of support that Azaria’s act of extrajudicial execution received, as a matter of principle, from broad sectors of the Israeli public.

Israeli solidarity, which is an essential condition for the nation’s survival, is called into doubt when so many hail a convicted killer as a hero.

While all terrorist attacks are very painful, they only pose a danger to society if the public allows them to do so. Terrorism can be defeated by detaching it from internal Israeli disagreements. Israelis must continue responding to terrorism and war as they have for many years: crying, bandaging their wounds, consoling, remembering—and getting on with their individual and national lives with heads held high, without hesitation or vacillation, and with a strong commitment to moral values.

This article was first published by JNS.org.