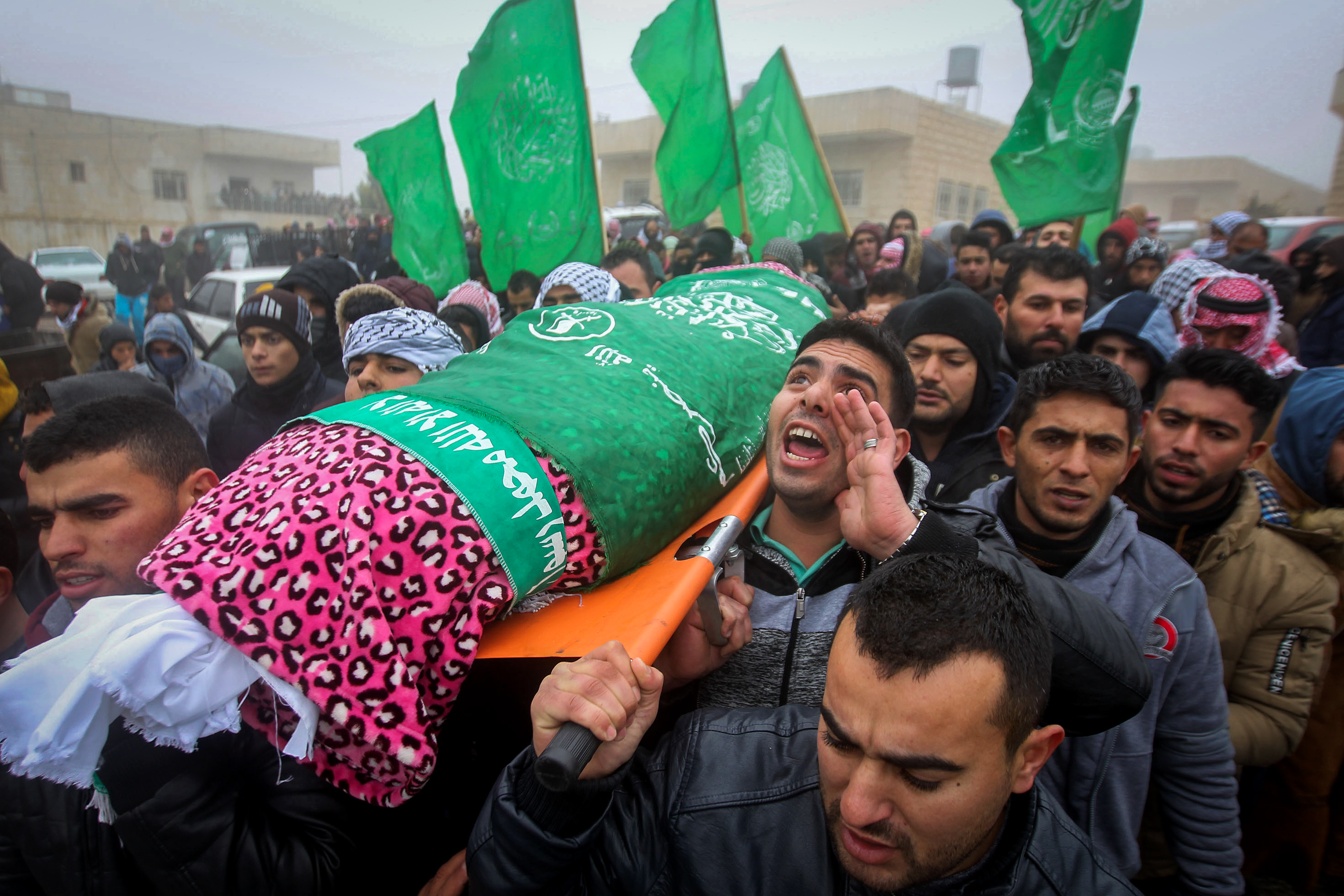 Palestinians carrying the body of Majd Abdullah Khudur, during her funeral in the West Bank village of Bani Naim, near Hebron. Khudur was shot dead last year, while carrying out a car ramming attack.

The videos posted on social media during the so-called “knife intifada” of 2015/16 are hard to forget. In one viral video, a man wrapped up in a Palestinian keffiyeh demonstrates how to subdue and stab a victim. After each jab, he applies a final twist to the knife – adding insurance to the life-ending aim of his actions.

For many observers, it was social media like this that fueled incitement.

Today, a year since those fateful events, Israel has ramped up online surveillance. But as it grapples with preventing another wave of attacks, what is it doing to safeguard democracy? What price must Israel pay to be safe? Researchers at the Israel Democracy Institute have proposed answers for protecting the queen of democratic rights: free speech. They include recommendations for better understanding incitement, monitoring threats, prosecuting, ensuring transparency and fostering social values for this era of interconnectedness.

The notion of incitement has become commonplace among policymakers; they see it as ground zero in the fight against digital terrorism.

The Removal of Criminally Offensive Content from the Internet bill, known as the “Facebook bill,” is the government’s attempt to regulate social media. As the bill inches closer to becoming law, it continues to raise heated debate.

One point of agreement among analysts is that incitement is always incitement to something, and if that something is a clear call to violence or terrorism, then such content should be taken down immediately and criminal charges should be weighed.

Anyone familiar with social media knows we are talking about tens of thousands of posts; monitoring them requires further criteria.

Dr. Amir Fuchs, head of the Israel Democracy Institute's Defending Democratic Values program, says the law includes a probability clause – if content is probable to cause violence it should be targeted. For authorities, he says, “This makes sense. They try to find the inciting posts that have the most reach, likes and shares.” They can then evaluate such threats without having “to issue an indictment for everything.”

In doing so, he adds, authorities must “try to maintain a coherent policy about when they indict and when they do not.” They are starting to do this, but Fuchs recommends that the government publicly disclose this policy in detail. The move would be a win for democratic transparency.

While incitement to violence and terrorism is fairly clear-cut, incitement to racism is a much stickier issue; though it’s certainly not new, it is endemic on both sides of the conflict. For example, during the recent period of heightened tensions, there were reported cases of Israelis chanting “death to Arabs” or posting similar content online. Most posters did not write this with an intention to kill, says Fuchs, explaining that for free speech purists being prosecuted for such a statement would be problematic. But it could happen. Currently, the only legal criteria for prosecuting racial inciters are that their words must be “purposeful.”

That’s admittedly vague, says Fuchs. The more important factor is how much danger racial speech can cause.

“Only the most heinous speech about violence and racism should be criminal,” he says.

Dr. Tehilla Shwartz Altshuler, director of IDI’s Center for Democratic Values and Institutions, agrees that for Israel, “a country based on the memory of the Holocaust, it’s more difficult not to criminalize racist speech.” But like Fuchs, she says it should only be enforced in “extreme cases.”

“In the ’30s and ’40s, racial incitement was the beginning, and where it ends makes us more careful about such speech,” he says. It can’t just be tolerated, as some fierce advocates of free speech would like. “If you’re more pessimistic about human nature and the ability to spread fear and hate among people, then you’ll be a bit more careful, instead of just leaving it to the marketplace of ideas.”

A more careful approach is evident in the Facebook bill. The Israeli government “wants to have the power to issue court orders to Facebook or Twitter,” says Fuchs. As it stands now, he explains, it does not have this authority and can only request that these platforms take down posts it deems dangerous.

Altshuler understands why the government is preoccupied with stemming incitement from abroad.

“A Palestinian kid can look through his Facebook feed and view a guy in Yemen calling on Palestinians to take up knives and kill Jews in Gush Etzion,” she says.

Little can be done in this case. Technology and its interconnectedness bring opportunities and dangers, notes Altshuler. But she believes social media platforms already understand this and quickly remove violent or racist content. So what to do about someone in Israel who posts such content? “You use criminal law, you press charges,” Altshuler says. What you do not do is “impose censorship before things are even said in a democracy.”

She charges that supporters of the bill are veering toward censorship in their aim to endow an administrative judge with powers to withdraw arbitrarily content posted by Israeli citizens. They argue this is essential “not only in terms of national security, but also national order.” But national order can mean anything, she objects, and could be used to suppress protests against the government. “You make the open and promising Internet a tool with which to monitor the deeds or content of citizens.”

What is gained by taking incitement cases to criminal court? Altshuler argues that, “It forces the government to think twice before pressing charges.” The legal process effectively checks government power by compelling it to “make arguments.” She says she is concerned that the Facebook bill is more about getting votes than keeping Israelis safe. According to Facebook’s published transparency report, Facebook blocked 962 pieces of content in the first half of 2016 (January-June) in Israel.

Libman echoes these sentiments: “You shouldn’t judge in advance. It’s better to judge in hindsight and to deter in this way.” By judging in advance “it is harder to appeal and have deliberation over whether certain speech should be criminalized.” He adds that when cases go to court, strong procedural demands are also needed “to make sure these are deserving cases... and free speech is not hurt.”

What does Facebook make of all this? Jordana Cutler, the company’s head of policy in Israel, begins by clarifying that the bill is not only about Facebook. Its nickname does not help people understand what’s in the legislation, she explains. “It’s about the power of the Israeli courts to force any Internet platform to remove content worldwide.”

Facebook has undoubtedly come a long way since the “knife intifada.” Instead of actively inspecting content, the company relies on a system of reporting by users about potential instances of incitement. Cutler explains that Facebook encourages users to read its community standards, which go well beyond calls for terrorism or violence, to include content such as hate speech, praising terrorist acts, bullying and sexual harassment. Anything that is reported and violates these standards, she explains, is subject to review by a team of specialists, including Hebrew-speaking Israelis. Just recently, the company has worked with other tech giants to streamline and improve this process for terrorist videos. Cutler says this is the way to tackle problems of incitement, “not by legislation, but by having people in the industry come together and collaborate.”

When Facebook receives requests from the Israeli government to delete content, she explains, the company weighs them against its community standards and anything in violation is quickly removed. She clarifies that there are no separate standards for Israel.

It remains to be seen if the bill will become a law. What’s clear is that things are changing fast, almost too fast for the government to keep up.

Fuchs says we are “in the process of adjusting to the era of social media. It always takes time and there is a gap between the government and the real world adapting.”

How exactly do average people adapt? Can people monitor themselves? Fuchs responds with an intriguing anecdote.

He remembers a time before social media when all we had were “comments to articles on Ynet or other websites from anonymous users, like ‘the guy from Tel Aviv.’” The remarks were extremely violent, he recalls, to the extent that experts began exploring penal initiatives, “so the government and police could investigate the IPs of those who were behind them.”

“It was thought that the comments were violent because of anonymity,” Fuchs continues.

“But in the era of social media, people holding a baby who are clearly identified can say the most violent things. It’s very unpredictable. People are not shy about expressing their views, which can lead to incitement.”

Fuchs says we can improve this situation by focusing on education and how students learn about the “other” in their midst.

For Altshuler, we need to improve our “digital literacy” by understanding how we communicate on social media. “People talk differently when they talk to a machine,” she says.

What’s the remedy? Civil society organizations have already begun helping people reflect more on their online interactions and the impact of their words so they can better grasp the limits of free speech. In this way, “social progress can be made also with social media,” Altshuler says.

And IDI is part of the discussion as the government and Knesset debate the Facebook bill and other ways to tackle online incitement.

The institute even recently hosted the head of Facebook Europe and Israel for a strategic discussion on the subject.

While the researchers say they are sympathetic to the government’s desire to bridle this wayward beast that is social media, they say digital literacy for the members of government is a first step in making sound decisions on the matter. This will help ensure that as legislative decisions about how to balance security and democracy in the digital age are made, they will ensure Israelis’ basic values are upheld, including freedom of speech and expression.

These are hallmarks of a democratic value- system that must continually find ways to march in lockstep with the feverish pace of technological change, Altshuler says.