A country that comes to a standstill for one whole day and doesn’t derive anything significant from it is missing the point. 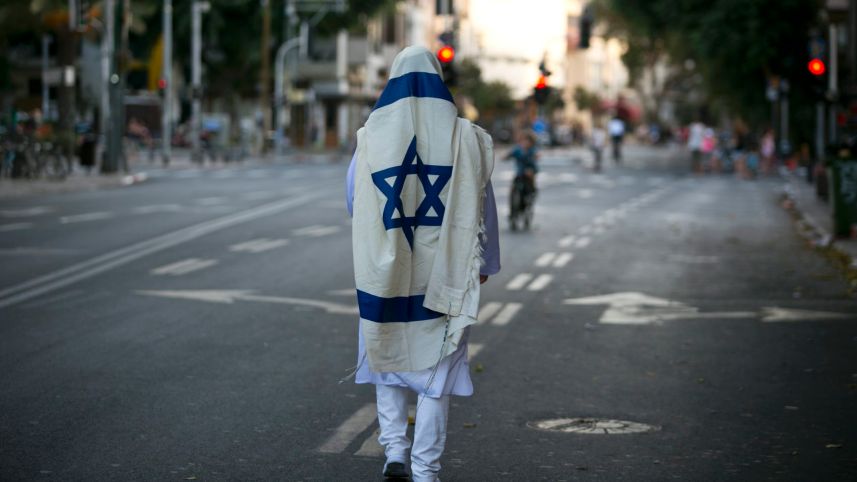 A Jew who lives in Israel and lets Yom Kippur go by like just another ordinary day is missing something very significant. A country that comes to a standstill for one day but doesn’t derive anything significant out of it misses out. On a personal level, Yom Kippur, in the simplest sense, invites introspection. On a national level, it provides the opportunity to rethink the tone of our public discourse. A few years ago I found myself in New York on Yom Kippur eve. As if against the natural order, public transportation didn’t stop at 2 P.M., the TV didn’t go silent at 3, and at 5, the streets didn’t empty of vehicles, to be replaced by bicycles. Except for the relative quiet deep in the Jewish neighborhood where I was staying, the world went on. The workaday noise persisted like at any other time. Compared to what happens in Israel, it was astonishing.

Jewish sources call Yom Kippur “the Sabbath of Sabbaths” or “the holy day.” Both of these terms seek to separate it from the other days of the year, to turn it into something special, different, distinct not only from weekdays but also from the Sabbath and the holidays. Sanctity, beyond its mystical significance, is different. It’s a bubble of something else, more significant, higher than reality. That’s Yom Kippur.

The Israeli Yom Kippur experience has miraculously become like that. A bubble in reality. An island of cessation in the frothing stream of daily life. Twenty-five hours of almost complete quiet. Without the flood of endless broadcast noise, without coalition power struggles. And without coercion, most Israelis chose a bike and not a car. They choose to let this day be different in the extreme from any other day – sacred.

This precious time capsule is both a gift and a challenge. It’s a gift because it’s an opportunity for something significant. It’s a challenge because filling this time with significance requires effort.
Soul-searching is not a religious matter but a human one, absent the usual distracting outside noise, the daily grind that often crushes the possibility of looking deeply into our lives. This is an opportunity for a restart in many areas, but especially in the sense that the quiet of Yom Kippur is in utter contrast to the volume of public dialogue.

Public discourse in Israel is screeching, rough and rude, earsplitting and toxic. The disturbed rhetoric of the Rogel Alphers and the Shimon Riklins, of politicians on the right and the left, which leads others to dig in so their voice will somehow be heard. Of people armed with a keyboard, for whom no amount of defamation is off limits. An unending cacophony in which one has to shout louder and frame his words more rudely than the others to get five minutes of attention.

This is a discussion in which arguments and content are lost in favor of a catchy headline, or more likes. The goals and the issues change often: a politician, a celebrity that somebody doesn’t like, a minority or just anybody who’s different. The style is similar. Sharpen your verbal arrows, coat them with poison and shoot them right into the heart of the victim, in a very visible way. To hell with political correctness, politeness or basic fairness. Volume is the message.

The outcome spells disaster. In the least worst case, this noise kills any possibility of a serious discussion on any topic, because you can’t hold a serious discussion while shouting slogans. In the worst case, this culture simply does damage to anyone working in the public sphere, no matter how pure their intentions. And finally, the environment around such discourse is fertile ground for real physical violence. It’s not only words that can cross the line into dangerous criminal incitement; the atmosphere of verbal violence can lead there, too.

This is a national phenomenon, but the responsibility for it is personal. Everyone who engages in public dialogue has an obligation for tone and expression. Politicians, the media, celebrities and other public figures are the natural culprits. But the easy access for anyone who sits in front of a computer, commenting or sharing, puts the onus on all of us.

I’m no fool. I don’t delude myself into thinking that one day of silence and even some serious thought on the matter will change the character of public discourse in Israel, but I’m also not prepared to give up on the possibility for change – the possibility that everyone who plays a part in creating this harsh culture of expression will draw something from the still, small voice of Yom Kippur and lower the volume for the rest of the year as well.

The author is the director of the Center for Religion, Nation and State at the Israel Democracy Institute and a lecturer in law at the Peres Academic Center.

This piece was originally published in Haaretz.