Dr. Hizky Shoham explores the multiple identities of the holiday of Shavuot, which began as an agricultural festival, was transformed into the "holiday of the giving of the Torah," and is most often commemorated as a celebration of Torah in today's Israel—by secular and observant Jews alike. 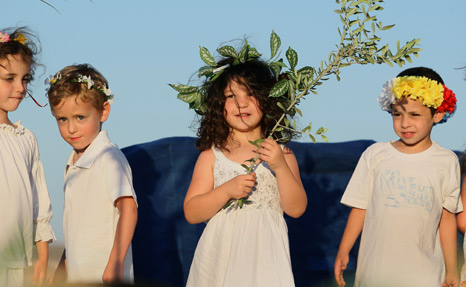 Many kibbutzim celebrate the holiday of first fruits with great fanfare, hosting colorful ceremonies that display the produce of the various branches of the kibbutz to its members and visitors. In urban areas, in contrast, women and men often hurry off to a Tikkun Leil Shavuot—a night of Torah study. At first glance, it would seem that there is no connection between these two ways of marking the holiday. Is that really true?

Holidays tend to take on different forms as they pass from one historical period to another and meander between diverse cultures and social-political contexts. In fact, the many names of Shavuot express the different meanings ascribed to this holiday in different Jewish cultures.

In Biblical culture, when Jewish society was an agricultural society centered on the Temple, Shavuot was known as the "holiday of first fruits" and the "holiday of weeks [shavuot]." It was an agricultural festival set to take place seven weeks "from the time the sickle is first put to the standing corn" (Deuteronomy 16:9), which marked the conclusion of the harvest period.

After the destruction of the Temple, the temple-centered society of the Biblical period was replaced by a rabbinic society that emphasized Torah study, and it became necessary to inject new content into the holiday. Consequently, Shavuot gradually became the "holiday of the giving of the Torah," based on a vague Biblical reference to the Israelites congregating at Mount Sinai to receive the Torah during the month of Sivan (Exodus 19:1). It is possible that this development was also related, even if only polemically, to the importance of Shavuot among the sects of the Judean desert, who believed that this holiday marks the day when God formed a covenant with Noah after the flood (it emerges from this that they understood the word shavuot as related to the word shevua—oath). This development might also be attributed to the influence of the Christian church, which considers Shavuot to be the day when the church was established, exactly seven weeks after the death of Jesus (Acts of the Apostles, chapter 2).

In the centuries following the destruction of the Temple, customs that emphasize the value of Torah study developed around the Shavuot holiday. In an interesting and unusual way, the custom of all-night study spread throughout nearly all the Jewish Diasporas, and continues today. The "holiday of the giving of the Torah" became the main thrust of the festival, even if its previous name serves as a reminder of the Biblical agricultural-Temple-centered culture.

An interesting change in the holiday's customs began at the beginning of the Zionist project, when first fruit celebrations were created in the pre-state Yishuv, inspired by the magnificent festivities that took place in the ancient Temple in Jerusalem and that are described in the Mishnah (Tractate Bikkurim). The similarities between these celebrations, however, also sharpened their differences: The local public space of the village or city was substituted for the temple, a representative of the Jewish National Fund took the place of the high priest, and the first fruits were brought to strengthen Jewish settlement in the Land of Israel instead of being offered up to God. Large-scale first fruits celebrations were held not only in villages and kibbutzim, but also in urban communities such as Hadar Hacarmel in Haifa and even in Tel Aviv.

Not everyone, however, wanted to relinquish the holiday of the giving of the Torah. For example, in a speech at a first fruits ceremony at Kibbutz Ein Harod in 1937, Shlomo Lavi, a prominent figure among the early Zionist pioneers [halutzim], called for celebrating Shavuot not only as an agricultural festival but also as the holiday of the giving of the Torah. His reasoning for this was that "this Torah gave us the human conscience." Lavi and many of his contemporaries believed that abandoning the idea of the giving of the Torah and of Torah study would be detrimental to the project of renewing Jewish culture, which for them was the essence of Zionism. In the 1960s, similar arguments were raised by the young intellectuals of the kibbutz movement who founded the Shdemot journal, who also called for Jewish renewal.

Since that time, the "Jewish Renewal Movement in Israeli secular society" (as Dr. Na'ama Azulay, who studies this movement, calls it) has gradually gained momentum and has expanded its activities to urban circles and to more diverse population groups. During the past decade, a new phenomenon has emerged: The Jewish Renewal Movement no longer suffices with intellectual activities aimed at introducing Israelis to "the Jewish bookshelf," but is also gradually initiating and establishing ritual activities that are actually religious in nature. Throughout the country, prayer communities that conduct Friday night services that combine the Kabbalat Shabbat service of the 16th century Rabbi Isaac Luria with poems of Yehuda Amichai and Leah Goldberg are being formed. These communities emphasize religious experience and spiritual uplifting, claiming—sometimes implicitly and sometimes explicitly—that there is an inherent contradiction between strict observance of Jewish law and spontaneous religious experience. This argument was also found among prominent figures of the early Labor Movement, such as the poet Avraham Shlonsky, who abandoned Jewish law in order to be able to appeal directly to God.

Today more than ever, participation in a Tikkun Leil Shavuot is far from limited to observant Jews. This year, for example, a night of learning will be held for the first time at the Tel Aviv Municipality building; this event is being initiated and supported by the municipality and is being conducted by the liberal, inclusive, and egalitarian Beit Tefilah Israeli congregation. Many kibbutzim still carry out colorful first fruit ceremonies, but the perception of Shavuot as a holiday of the giving of the Torah remains predominant. This reality reflects a growing sense among the public that the Torah belongs to everyone.

Dr. Hizky Shoham is a researcher with IDI's Nation State project and is the author of the upcoming book Let's Celebrate! Festivals and Civic Culture in Israel, which is to be published by IDI Press.

This article was published in Hebrew on the NRG website on June 3, 2014.