Last year the public trust in the media reached an all-time low. Why?

Last year the Democracy Index pointed to an all-time low in public trust in the media. However, in 2017 it seems that the trend has reversed. The trust of the Israeli public in the media has risen by 4% reaching 28% this year.

This could be a one-time upturn and we will not know whether this is really a trend until we receive next year's data. Either way the decline in public trust of the media is a troubling indicator but also a happy one since it suggests an increase in the public's understanding of media. Also we can be optimistic and say that the Israeli media could be undergoing processes of diversification, deep processes of change that makes it understand where the failures were and slowly even fix – and the public knows how to respond to that and return the favor through an increase in trust.
Interestingly, the process we are witnessing in Israel is similar to the one currently happening in the United States. In Gallup's poll from last year, public trust in the media has plummeted to a record low, while this year, Gallup's poll and another poll such as this one conducted by Reuters/ IPSOS in early October 2017, demonstrated a complete reversal of the trend: 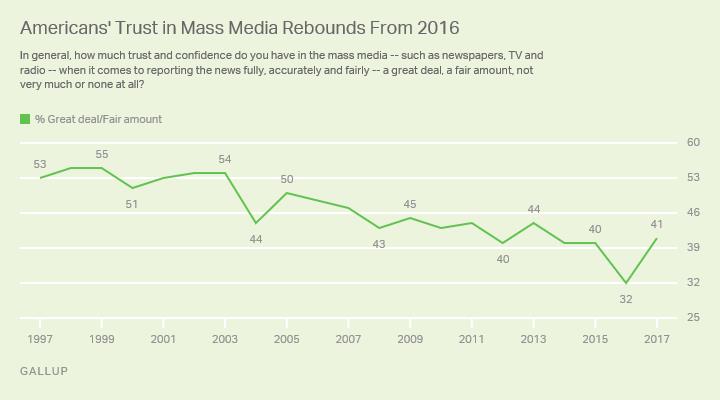 According to another Gallup poll from June 2017, specifically engaging with trust in newspapers alone and television alone, more Americans say they believe the newspapers more than they did a year ago. It is clear the levels of trust are not as they were in the 1990's, but the plunge has come to a halt. 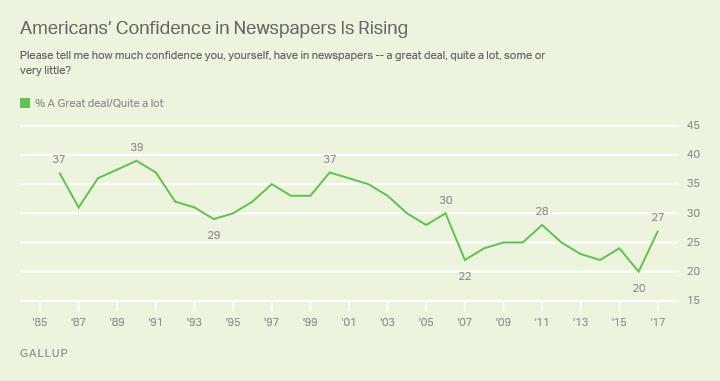 This similarity between the United States and Israel is not surprising – since in both the increase in the public understanding of the media and exposing its interests are accomplished considerably through social media. Both here and there, there are processes of transparency–trust in the media is very much dependent on the political stand of a given time. The other thing Israel and the United States have in common – more bluntly than in other democracies – is the fact that the Head of State use attack tactics against mass media as part of his comprehensive governing strategy. So what does the break in the trend of declining public trust in the media tell us?
The answer may be in the favorite words of the state's scientists: the Principal-Agent Problem, which means that the elected official promotes his agenda at the expense of the interests of the public that appointed him.

By looking at the data that bring about an increase in public trust of the media in the United States, the Gallup poll indicates a significant rise for the Democrats, a moderate rise for the independents and stability for the Republicans: 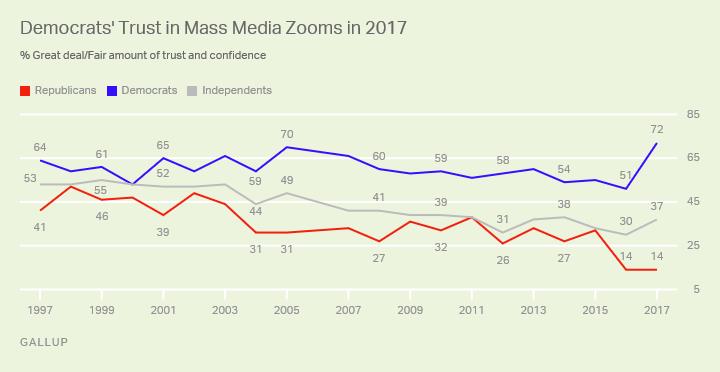 The thing most clearly indicated by this data is that the American public no longer buys Trumps statement that the media is the enemy of the people. In Israel things are similar. We can see some interesting findings that corroborate the sensation among the public that the fact the PM attacks the media so markedly, is not out of a desire to benefit the public but mostly to benefit him.
First, there is an increase in the past three years in percentages of the public that think politicians care more about their interests than the interests of the general public:

Second, three-quarters of the public objects to the statement that a media tool should be shut down if it criticizes the regime too sternly.

And third, by looking at the findings of the low level of trust in news deriving from social media, it is possible to learn that the tactic of "bypassing" the traditional media through an unmediated communication with the public through social media – does not work.
Similarly, in the United States, a university poll which was reported in Politico.com shows that 54% of the public believe the mass media more than they do president Trump in his tweets in social media concerning reports on important topics, and only 36% believe Trump over the media. 2017 may be remembered as the turning point in public trust of the media. The reasons for it may be the profound internalization of media transparency and improvement in the media's work, the fact that the PM's attacks on the media have run their course and the public understand they serve the PM more than the general public, as well as the disillusionment on the built-in biases in social media and the fact they hold a significant role in the distribution of fake news more than the mass media.
Paradoxically, this is a lifeline for the press, which must use it correctly and take this opportunity to resituate itself as the watchdog; as the place where proper and significant research is carried out and not fake news, where the principles of diversification and transparency are implemented, and democracy and integrity are defended.

First published in the Jerusalem Report

Tags:
Regulation of the Media,
Democracy and technology,
media and politics,
ethics in the media,
freedom of information,
Media Reform,
Center for Democratic Values and Institutions