Dr. Adv. Shmuel Berkovitz provides demographic, economic and security reasons why the recent surge of voices (including Zionist Union leader MK Isaac Herzog) calling for the de-annexation of most of the Arab neighborhoods and villages on the outskirts of Jerusalem are misguided. 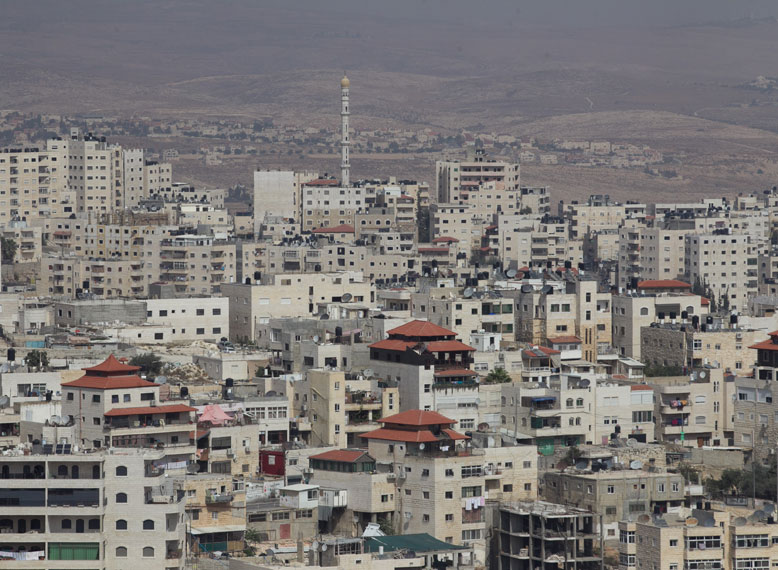 There has recently been a surge of voices calling for the de-annexation of most of the Arab neighborhoods and villages on the outskirts of Jerusalem, that were included in its expanded municipal boundaries after the Six Day War in 1967. (These include head of the Zionist Union camp MK Isaac Herzog’s political program, approved by his party’s conference on February 2, 2016; the article by Prof. Shlomo Avineri, “A Little Realism at Last,” Ha’aretz, Feb. 19; and others). Recent days have also seen the emergence of the Save Jewish Jerusalem movement, whose platform (published in the press day after day) calls for revoking the residency status of around 200,000 of the 313,000 residents of the Arab neighborhoods in the eastern part of the city, turning them over to the Palestinian Authority, and only pre-1967 Jordanian Jerusalem (6 sq. kilometers, including the Old City and its immediate surroundings—the so-called Holy Basin) within the municipal boundaries.

Anyone who knows anything about the relevant facts realizes it would be impossible to conclude a peace agreement with the Palestinians without giving back most of the Arab neighborhoods and resolving the political status of the Holy Basin, and especially the Temple Mount. But re-dividing Jerusalem and stripping 200,000 of its Arabs of their resident status – as a unilateral act by Israel rather than as part of a peace accord with the Palestinian Authority – is a bad idea by any standard and clearly illegal.

I disagree with the main arguments proposed by the proponents and will review them below:

The first main argument in favor of de-annexation is demographic: The partition proposed would remove some 200,000 Arabs from the borders of Jerusalem, leaving only 113,000 living in the city. The Jewish majority would jump overnight from 63 percent today to 83%. But this redrawing of the map would turn Jerusalem into a border town and many Jews would leave it. After Jerusalem was divided between Israel and Jordan in 1948, about 25,000 Jews—a quarter of the population at the time—moved away. What is more, the fear of de-annexation has already led thousands of Arabs to relocate to the Jewish neighborhoods in the eastern part of the city, such as Armon Hanatziv and Pisgat Ze’ev, and to Abu Ghosh. Finally, even the 113,000 Arabs who live in what was Jordanian Jerusalem and would be left inside the city limits (constituting about 17% of the population) would be able to tip the balance in municipal elections should they decide to exercise their right to vote—which, from a legal standpoint, they cannot be denied.

The second main argument relates to security: The erection of a border fence between the de-annexed Arab villages and the city proper would prevent the entry of terrorists. The security situation, too, would be improved, by the introduction of IDF forces to those villages. But this argument is incorrect.

It is true that at the start of the current intifada, when the Arabs were afraid that Israel was about to change the status quo on the Temple Mount by allowing Jews, too, to pray there, most of the terrorists came from eastern Jerusalem. But after the Prime Minister made it clear (in late October 2015) that Jews would not be permitted to pray on the Temple Mount, the center of gravity of the violence moved to Hebron and the Etzion Bloc; now most of the terrorists originate there and not in Jerusalem. In addition, special units of the Israeli Police and Border Police, who are no whit inferior to the IDF, already operate in the Arab neighborhoods of eastern Jerusalem.

The third main argument is economic: Point Six in the Save Jewish Jerusalem manifesto asserts that removing most of the Arab villages from the city would save Israeli taxpayers between two and three billion sheqels a year.

First, I have not been able to obtain from the movement official documents to support the alleged savings. Second, it is clear that the figure of two to three billion is based on a very rough estimate, with a huge and far from trivial error margin of a billion sheqels. Third, it is almost certain that movement failed to deduct the lost tax payments by the Arab residents of eastern Jerusalem to the National Insurance Institute and the Jerusalem municipality.

Finally, this argument totally leaves out the economic benefit that Jerusalem derives from the labor of 32,000 Arab residents of eastern Jerusalem in the western part of the city. They account for 75% of the hotel workers there, 66% of construction laborers, 53% of the transportation force (including 40% of the Egged bus drivers), 41% of the sanitation and maintenance workers, 29% of factory hands, and 20% of the staff in healthcare and welfare institutions (these figures from a study by Marik Stern of the Jerusalem Institute for Israel Studies).

This means that excluding all these workers from Jerusalem would deal a harsh blow to the livelihood of 32,000 Arab families (some 150,000 persons) and trigger a severe economic crisis and utter chaos in the western part of the city as well.

What is more, under Israeli law, permanent resident status in Jerusalem entitles people to a series of rights and social benefits, including free movement and the right to live anywhere in the country; rights under the Basic Law: Human Freedom and Dignity, such as property rights, equality, and a dignified income and living; social benefits under the National Insurance Law, including child allowances, unemployment benefits, disability allowances, survivor benefits, and pensions; the right to healthcare under the National Health Insurance Law 5754-1994; the right to a guaranteed income stipend under the Guaranteed Income Law 5741-1981; and others.

This means that the sweeping elimination of all these rights and social benefits for the residents of the neighborhoods in question, as a result of their being stripped of their permanent residency status and the Israeli government’s unilateral transfer of their neighborhoods outside of the municipal boundaries of Jerusalem, without their agreement and not in the context of an agreement with the Palestinian Authority, is liable to be ruled unconstitutional by the High Court of Justice, mainly because of its severe infringement of these residents’ right to equality, a decent livelihood, and a life with dignity.

This proposal is not wise, and in fact dangerous, because the blanket withdrawal of these rights and social benefits from the residents of the Arab neighborhoods in the eastern part of the city is liable to worsen their situation even further, when already today they are the victims of discrimination in almost every sphere (some 80% live below the poverty line) as compared to the adjacent Jewish neighborhoods, leaving them in total despair that is liable to push them too to participate in the Third Intifada.

Here we should recall that about 10 years ago a separation fence was built around Jerusalem, physically excluding from the city six Arab neighborhoods in the north that are home to about 90,000 persons. The municipality stopped providing them with services, even though they remain legally within the city limits and their residents carry permanent-resident identity cards. As a result, these neighborhoods are buried under mountains of trash heaps and are flooded by sewage, with inadequate roads and almost no sidewalks. They have turned into a no-man’s land, ruled by criminal organizations, with drugs and weapons sold openly. They are also the site of illegal and unsafe construction of multistory buildings with pirate hook-ups to the electrical grid and water system, and no sewer lines. The de-annexation of other Arab neighborhoods without an agreement with the Palestinian Authority is liable to cause them to deteriorate into a worse state.

Unilaterally depriving 200,000 Jerusalem Arabs of their residency status is tantamount to their involuntary transfer outside the borders of Israel. Such a step should be taken only as part of a political accord with the Palestinian Authority, including a commitment on its part to continue providing the social benefits enumerated above or the payment of fair compensation to those who would lose these benefits, provided by the countries that subsidize the Palestinian Authority. Taking such a far-reaching step without these people’s consent, after they have enjoyed Israeli resident status for 48 years and come to base their lives on it in every respect, especially economically, would be patently immoral.

The idea of stripping most of the Arabs of Jerusalem of their residency status is also clearly illegal. Article 11 of the Law of Entry 5712-1952 does not define any conditions or criteria for the Interior Minister’s power to rescind the permanent resident status granted to any person, such as the inhabitants of these neighborhoods. This means that the minister’s discretion in the matter is very broad. It is clear, however, that it too is subject to the principles of administrative law, such as reasonability, proportionality, nondiscrimination, reliance, and the absence of irrelevant considerations; it is also subject to judicial review by the High Court of Justice.

It is clear, then, that depriving those who live in the Arab neighborhoods of eastern Jerusalem of their permanent resident status by de-annexation of the neighborhoods and their transfer to the Palestinian Authority, solely because they are Arabs, when they have committed no crime, is gross and unacceptable discrimination, unreasonable and disproportionate, especially towards the Arabs who would remain in the city.

A fortiori this holds in view of the conditions defined for rescinding permanent residency status by Amendment 11 to the Entry Regulations 5734-1974: remaining in a country outside Israel for more than seven years and/or acquiring foreign citizenship and/or receiving a permanent resident visa in that country. This means that persons who now hold permanent residence permits in Jerusalem would forfeit it should they settle in another country and transfer the center of their lives there. But the center of these individuals’ lives is Jerusalem (and has been for a long time), and it is inconceivable to transfer them unilaterally, at the sole initiative of the government of Israel, from Jerusalem, the center of their lives, to some other place.

So it is astonishing that the Save Jewish Jerusalem movement is proposing to amend the Basic Law: Jerusalem, the capital of Israel, while totally ignoring the rights of the Arab residents of Jerusalem under all the other laws cited here.

Dr. Adv. Shmuel Berkovitz is an expert on Jerusalem and the Holy Places in Israel. This piece was written for the Israel Democracy Institute. The author's opinions do not reflect those of the institution.