The final list of parties and candidates have been submitted and it appears that at least 20, perhaps even 30, of the 120 MKs elected in 2020 will not serve in the next Knesset.

The election campaign has reached a critical milestone. After long days of alliances, divisions, promises and departures, the lists of candidates for the parties running for the 24th Knesset election were submitted. Now that the dust has settled and the picture has become clearer, one can carefully assess what the next Knesset will look like based on current polling. This analysis must be read with caution as it is still around six weeks before Election Day. This is a long period during which the balance of power between the competing lists may still change. Some will get stronger and others will get weaker.

In the previous elections (2020), the lowest number of factions ever were elected to the Knesset: only eight. This low record is not expected to be maintained this time. Based on recent polls, out of the 39 lists registered to run, between 9 and 14 are expected to pass the electoral threshold (3.25% of the valid votes) necessary to enter the Knesset. According to these surveys, at least five lists are in the "danger zone" – meaning close to the threshold: Meretz, Religious Zionist arty, Ra'am (United Arab List), Blue-White and the New Economic Party. 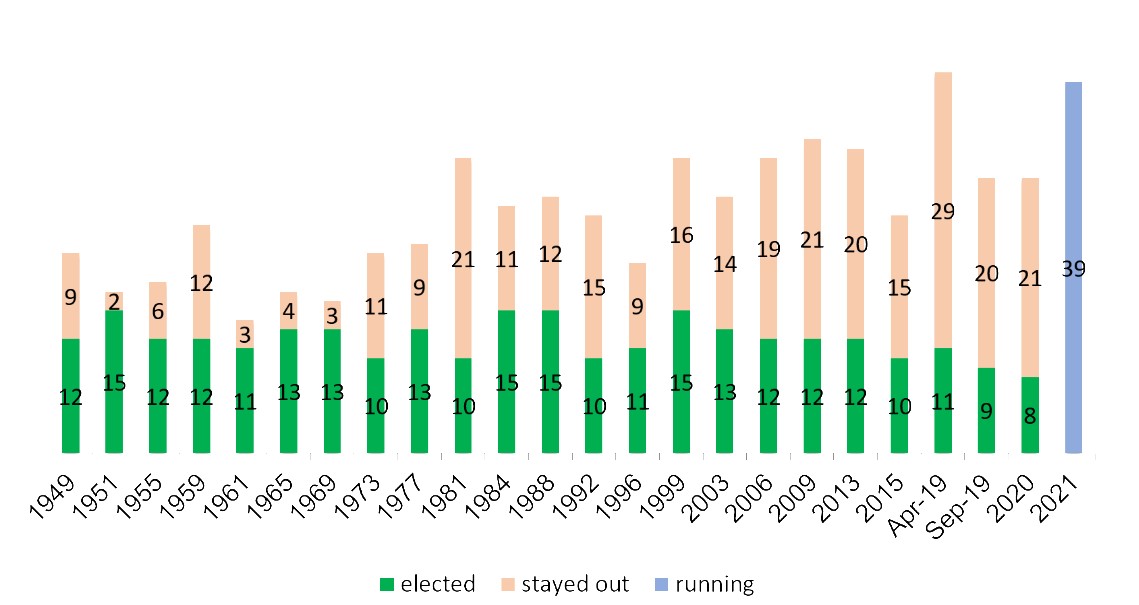 Although only a year has passed since the previous election, the next Knesset is set to look quite different. At least 20, and perhaps even 30, out of the 120 MKs elected in 2020 will not serve in the next Knesset if some of the lists mentioned above do not pass the minimum threshold. Among the prominent names that will not serve in the next Knesset are three veterans: Amir Peretz (first elected in 1988), Yitzhak Cohen (1996) and Meshulam Nahari (1999) - all announced their retirement from political life. In addition, there is a list of MKs who served shorter terms also announced they were stepping back from politics – Avi Nissenkorn, Gabi Ashkenazi, Rafi Peretz, Mtanes Shehadeh, Miki Haimovich, Assaf Zamir, Yizhar Shai, and more. To this list we can add figures who served longer: Moshe "Bogie" Ya'alon, Itzik Shmuli and Ofer Shelach.

Based on recent polling, and keeping in mind the necessary caution (especially when around 5 lists are around hovering around the minimum threshold) we can predict that the number of women entering the next Knesset will be close to the high record reached after the previous election: 30 MKs. The Likud will have the largest female representation in absolute terms but the factions with the highest gender equality will be the Labor Party and Meretz. Merav Michaeli is the only woman to head a list that is expected to be elected to the Knesset, but in seven other lists women are in second place: Orna Barbivai (New Hope), Ayelet Shaked (Yamina), Tamar Zandberg (Meretz), Michal Waldinger (Religious Zionist Party), Pnina Temano-Shata (Blue White) and Osnat Akirav (New Economic Party).

In addition to the record number of women elected to the 23rd Knesset there was a high record of non-Jewish MKs: 17 Arabs and Druze. It is not at all certain that this achievement will be repeated this time. The split in the Joint List and the increasing outreach by the other parties (including the Likud) to Arab voters could harm Arab representation in the Knesset. A lot is riding on whether Ra'am and Meretz (the latter includes 2 Arab candidates in the top five) pass the minimum threshold.

A military career has always been one of the most prominent paths to a political career in Israel. In the 1980s, four former chiefs of staff and two to four former generals could be found among the Knesset members. This high presence tapered off later, and in 2016 no chief of staff remained in the political system. The last three elections changed the trend and brought the "generals" back into the political arena. In the outgoing Knesset, three former chiefs of staff served (all in Blue and White) and five former generals. The next Knesset would include fewer “generals”: Ya’alon, Ashkenazi and Rafi Peretz are not running this time, and the re-election of Benny Ganz is not certain.

Many Knesset members began their political careers in the local municipalities. A study that analyzed the backgrounds of the members of the 20th of Knesset (2015-2019) found that almost a third had previously served as elected officials in local government. The next Knesset is also expected to include many members with similar backgrounds. Among the new ones are Meir Yitzhak-Halevi (Eilat), Alon Davidi (Sderot), Ofer Berkovich (Jerusalem) and Mazen Ghanaim (Sakhnin, if Ra'am passes the minimum threshold).

Tags:
Elections and Parties,
Elections 2021,
Center for Governance and the Economy