Those who still haven’t made up their mind about who they will vote for is much higher than it was before the elections in March 2020 – how will it affect the outcome?

The percentage of those who still haven’t made up their mind about who they will vote for  is much higher than it was before the elections in March 2020. Indecision is especially widespread among those who define themselves as centrists (34%, as compared with only 8% last year). Uncertainty is also more prevalent among those on the left, but not to the same extent (19% today, 9% a year ago). The percentage of the undecided is lowest on the right (14%), but still much higher than before the last election (8%).

The causes of this uncertainty vary from camp to camp. The Center has yet to recover from the traumatic shattering of the hopes placed in the Blue White party. Some of those who supported the party a year ago, are now inclined to vote for New Hope, in the expectation that it could put an end to Netanyahu’s rule ; but at the same time—are unhappy with this decision, since Gideon Sa’ar, who heads New Hope, is distinctly right wing. Only two parties remain on the Jewish left, so there is no dramatic split on the party level, but both of them are floundering around the election threshold, and their candidate lists are not particularly appetizing. Nor does either of them—Labor and Meretz—offer any new conceptual or operational message or solutions for the pressing concerns of the hour. Since it is clear that neither of them will play a central role in any feasible coalition, some of their potential voters are hesitating, and are pondering a "strategic" vote for one of the large parties—mainly Yesh Atid.

On the right, the uncertainty can be attributed to the proliferation of competing lists (the Likud, New Hope, Yisrael Beitenu, Yamina, and the National Union) that are eating away at one another.

Perhaps uncertainty will decline on Election Day. But another possibility--far more dangerous to Israeli democracy, is that the fence-sitters will simply decide to stay home; this will undercut the legitimacy of any future government.

Still Undecided Which Party they will Vote for on Election Day, March 2020 and March 2021 (Jews. pct.)The figures for February 2020 are from “The Israeli Vote, February 2020”; those for February 2021 are taken from two surveys conducted by the Viterbi Center during that month. The Jewish sample numbered 1,363 persons; the maximum sampling error for the entire sample is ±2.71%, with a 95% confidence level. 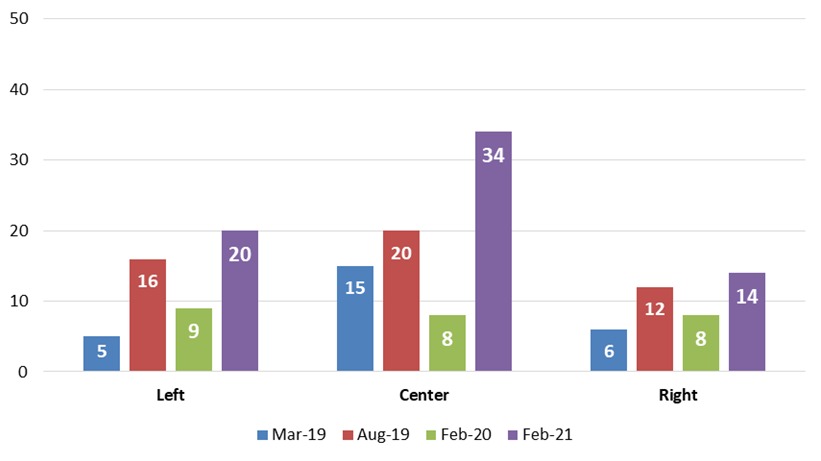