How often does Israel hold elections? On average every 2.3 years!

After failing to pass a budget, the Knesset automatically dispersed yesterday and Israel's fourth election in two years will now take place in March.

How does this compare to other parliamentary democracies? , Israel is now in last place in terms of the frequency of elections compared to 20 other parliamentary democracies. According to Prof. Ofer Kenig, a research fellow at IDI, Israel has held elections on average every 2.3 years since 1996. During this same time period, Spain has headed to the polls every 3 years, the UK every 3.8 and Italy has gone to elections every 4.4 years.

Prof. Ofer Kenig: “this unfortunate reality is the result of a combination of a deep-seated crisis of governance compounded by the unbearable ease with which early elections can called, while at the same time we have a prime minister who has ensured that the public interest is held hostage to the leader's personal considerations."

Prof. Kenig added: "When it comes to the average time in office for prime ministers, we are actually close to the top in comparison to other parliamentary democracies. Prime Minister Netanyahu's long tenure in power places Israel in 6th place. However, of course this sense of stability is illusionary. While the Prime Minister has remained in office, the political system has suffered from high-levels of instability for the past decade."

This political instability has proven once again how vital electoral reform is for Israel! 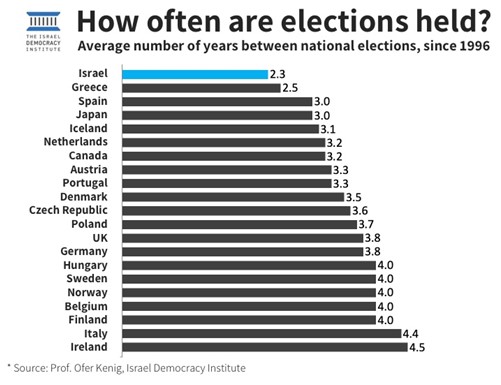 Tags:
Elections and Parties,
Elections in Israel,
stability,
Political Reform,
Center for Governance and the Economy