Both the US and Israel enter new eras of leadership - how does the public view the future of US-Israel relations against the background of the the conflict with the Palestinians.

In recent years, the US-Israel relationship was stewarded by Israel’s longest-serving leader, former Prime Minister Benjamin Netanyahu, and the man whom he referred to as “the greatest friend that Israel has ever had in the White House,” former President Donald Trump. This week, the first meeting between the two countries’ newly elected leaders, President Joe Biden and Prime Minister Naftali Bennett, will set the tone for a new era of US-Israel relations. New data from the 2021 Chicago Council Survey indicate that some differences in ideas about US policy toward Israel on Capitol Hill—heightened by the 11-day clash between Israel and Hamas last May—have corresponding divisions among the American public. The US public is sharply divided along partisan lines on key issues, including whether to take a side in the Israeli-Palestinian conflict, support for a Palestinian state, and restrictions on the uses of military aid to Israel. Moreover, it’s not just Americans who are at odds with each other. A comparison of the recent Chicago Council Survey and a Viterbi Family Center poll shows that the American public and Jewish Israelis have opposing views on what might be acceptable solutions to the Israeli-Palestinian conflict, while Israeli Arabs and Americans are broadly aligned on acceptable political outcomes.

• Americans prefer not to choose a side in the Israel-Palestinian conflict (58% no side, 32% choose to side with Israel, 8% with the Palestinians).

• Americans think either an independent Palestinian state on the West Bank and Gaza (56%) or a one-state solution in which Israelis and Palestinians are treated as equal citizens (60%) is acceptable. Relatively few say the status quo is acceptable (26%).

• Attitudes regarding specific US policies toward Israel differ by partisan orientation. For example, overall opinion divides closely on whether the United States should (50%) or should not (45%) restrict US military aid to Israel to prohibit its use in military operations against Palestinians. While a majority of Democrats favor these restrictions (62%, 32% oppose), Republicans are nearly the mirror opposite, with six in 10 opposing them (61%, 32% favor).

Majority of Americans Describe Israel as an Ally or Necessary Partner

Americans generally feel favorably toward Israel and tend to see Israel as an ally or partner to the United States. When asked to rate their feelings toward Israel on a thermometer scale in 2020, with zero representing very cold, unfavorable feelings and 100 representing very warm, favorable feelings, Americans rated Israel a 58. This rating was similar to those given to other important US partner countries, including Mexico (61), South Korea (60), and India (55), but significantly below the ratings given to some of America’s closest allies, such as Canada (81) and Great Britain (74). 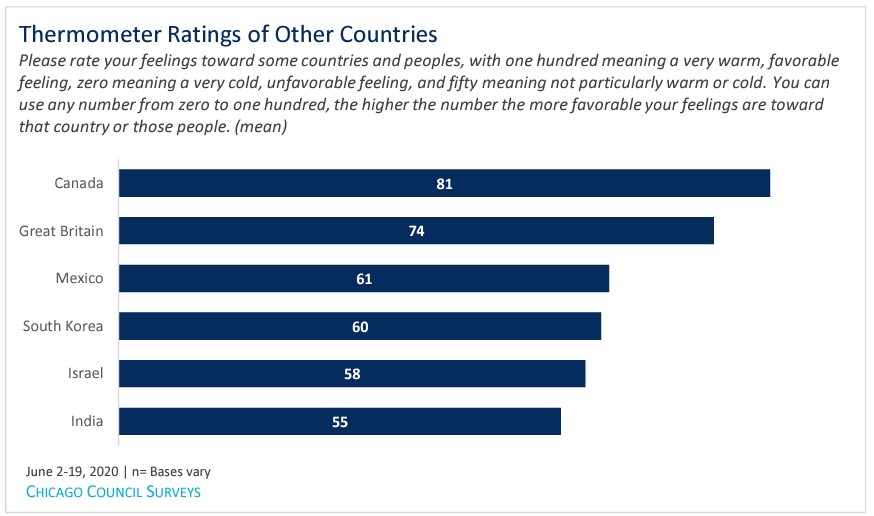 The US public is about as likely to describe Israel as an ally (37%)—a country that shares our interests and values—as it is to describe South Korea in the same way (41%). But Americans seem to place a stringent definition on that characterization: even France, technically the United States’ oldest ally, is only described as such by 52 percent of the public, the highest rating for any country presented.

However, the 2021 data also show that there are strong partisan differences in American views on Israel. While most Republicans see Israel as an ally (60%), relatively few Democrats say the same (22%). Instead, a plurality of Democrats see Israel as a necessary partner (37%), and three in 10 say they don’t know how to characterize the US-Israel relationship (30%). There are also notable partisan differences on US policy toward Israel, including potential political solutions to Israeli-Palestinian conflict, US arms sales to Israel, and whether the United States should place conditions on its military aid to Israel. 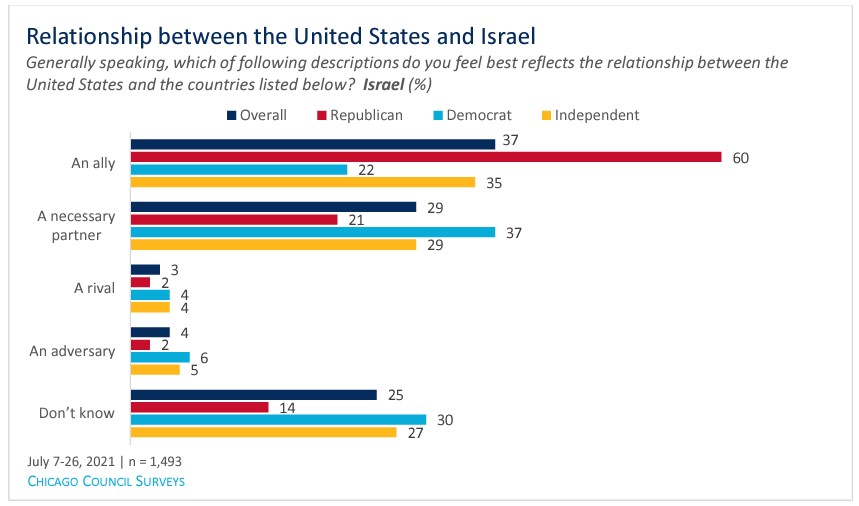 Americans Prefer to Remain Neutral in the Israel-Palestinian Conflict Consistent with past surveys, a majority of Americans would prefer that their country not take either side in the conflict between the Israelis and Palestinians (58%) (see appendix for full trend). But more would prefer siding with the Israelis (32%) than with the Palestinians (8%). While this preference has been broadly consistent over time, in recent years, Republicans have grown to believe the United States should side with Israel, with fewer stating it should take neither side. By contrast, Democrats have consistently preferred to not take a side. Overall, there has been a 4-point increase in support for the Palestinians over the past year, likely related to media attention to the conflict that took place from May 10–21, 2021.

American Public Divided on Restrictions to US Military Aid to Israel

Progressive Democrats like Senators Bernie Sanders and Elizabeth Warren have called for limiting the use of US military aid to Israel in ways that violate Palestinians’ human rights. The US public is closely divided on whether the United States should (50%) or should not (45%) put restrictions on US military aid to Israel so it cannot use that aid toward military operations against Palestinians. There is a sharp partisan split on this question, with six in 10 Republicans opposing such restrictions and six in 10 Democrats supporting them.

In a similar pattern, the US public at large is evenly divided on whether the United States should sell arms and military equipment to Israel (48% should sell, 49% should not). A majority of Republicans (69%) support arms sales to Israel, while a majority of Democrats (64%) oppose (see appendix for full partisan breakdown). Americans Are Open to One- or Two-State Solution to the Conflict As in past surveys, Americans are somewhat more inclined to support (49%) than oppose (42%) the establishment of an independent Palestinian state on the West Bank and the Gaza Strip. On this question, too, Democrats are about twice as likely as Republicans to favor this proposal. 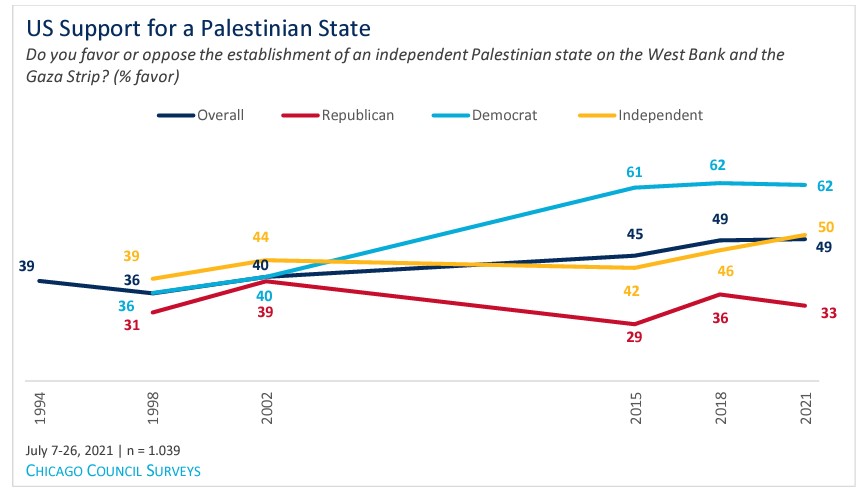 In a separate question that tested the acceptability of a two-state, one-state, or status quo resolution to the conflict, majorities of Americans find acceptable both an independent Palestinian state on the West Bank and the Gaza Strip, and a one-state solution in which Israelis and Palestinians are treated as equal citizens. Republicans are somewhat more likely to find the one-state option acceptable (56%) than the two-state proposal (49%). Democrats find both equally acceptable (64% one state, 61% two-state). Relatively few overall (26%) say the status quo is acceptable.

Majority of Israeli Jews Deem One- and Two-State Solutions Unacceptable

A July 27–29 Viterbi Family Center survey conducted among Israeli Jews and Arabs finds that similar to Americans, majorities of Israeli Arabs find either the one- (56%) or two-state (69%) options acceptable, and only 15 percent say the status quo is an acceptable solution. A majority of Israeli Jews consider each of the options unacceptable, but of all three presented, continuation of the status quo receives the highest level of support (42%). 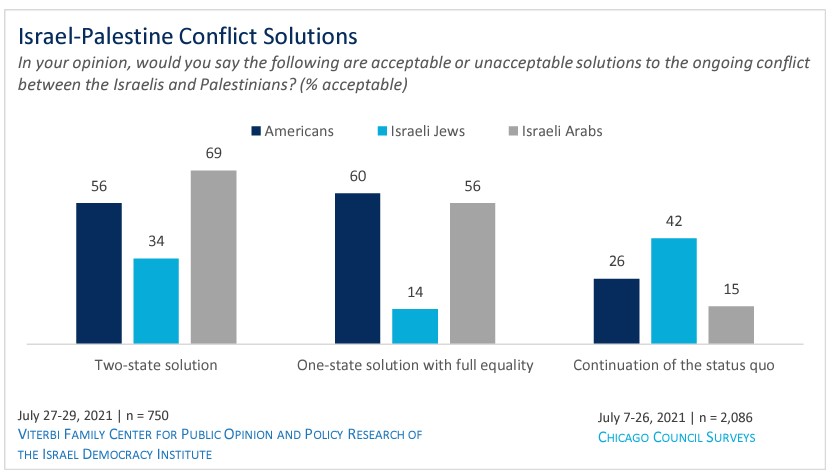 A more detailed analysis conducted by the Viterbi Family Center finds that when grouped by left, right, and center ideological affiliations, a large majority on the left (88%) thinks the two-state solution is acceptable, and so does almost half of the center camp (47%), compared to a fifth of the right-wing camp (20%). Half of those who define themselves as right-wing think maintaining the status quo (51%) is acceptable, compared to a third of the center and a tenth of the left. The one-state solution is not accepted by any of these three political camps. 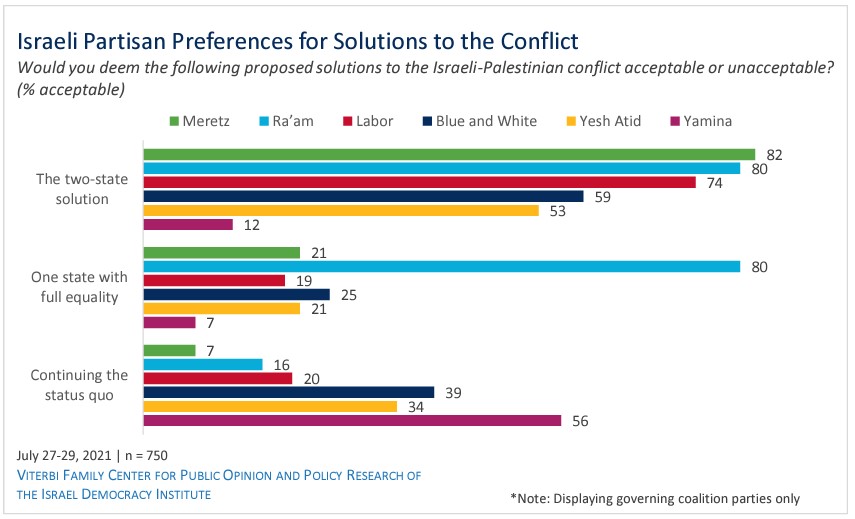 While the purpose of this first meeting between President Biden and Prime Minister Bennett will primarily be to discuss Iran, the White House has also framed it as "an opportunity for the two leaders to discuss efforts to advance peace, security, and prosperity for Israelis and Palestinians." As both countries enter new eras of leadership, this survey suggests that Americans might feel more positive about the future of US-Israel relations if the Israeli leadership is willing to take some steps towards a solution in the conflict with the Palestinians.

Unless otherwise noted, results from the United States come from the 2021 Chicago Council Survey of the American public on foreign policy, a project of the Lester Crown Center on US Foreign Policy. The 2021 Chicago Council Survey was conducted July 7–26, 2021, by Ipsos using its large-scale nationwide online research panel, KnowledgePanel, among a weighted national sample of 2,086 adults, 18 or older, living in all 50 US states and the District of Columbia. The margin of sampling error for the full sample is +/- 2.33 percentage points, including a design effect of 1.1817. The margin of error is higher for partisan subgroups or for partial-sample items.

Partisan identification is based on respondents’ answer to a standard partisan self-identification question: “Generally speaking, do you think of yourself as a Republican, a Democrat, an Independent, or what?”

The 2021 Chicago Council Survey is made possible by the generous support of the Crown family and the Korea Foundation.

Results from Israel come from the Israeli Voice Index for July 2021, which was prepared by the Viterbi Family Center for Public Opinion and Policy Research of the Israel Democracy Institute. In the survey, which was conducted on the internet and by telephone from July 27 to 29, 2021, 599 men and women were interviewed in Hebrew and 151 in Arabic, constituting a representative national sample of the entire adult population of Israel 18 and older. The maximum sampling error for the entire sample was ± 3.59% at a confidence level of 95 percent. The fieldwork was done by the Midgam Institute. For the full data file see Data Israel.

For more information about the results, please contact the authors:

About the Chicago Council on Global Affairs

The Chicago Council on Global Affairs is an independent, nonpartisan membership organization that provides insight—and influences the public discourse—on critical global issues. We convene leading global voices, conduct independent research, and engage the public to explore ideas that will shape our global future. The Council is committed to bringing clarity and offering solutions to issues that transcend borders and transform how people, business, and governments engage the world. Learn more at thechicagocouncil.org and follow @ChicagoCouncil.

About the Viterbi Family Center

The Viterbi Family Center for Public Opinion and Policy Research at the Israel Democracy Institute—a nonpartisan think-and-action tank dedicated to fortifying Israeli democracy—taps into Israeli public opinion on a wide range of social, political, and policy issues. Findings inform the public discourse and provide a tool to decision makers to craft evidence-based attitudes and policies. Annual monthly and ad-hoc surveys produce data in real time, focusing on issues that were particularly prominent in the public discourse prior to the survey. The Viterbi Family Center holds the largest, most comprehensive database on public opinion surveys in Israel. 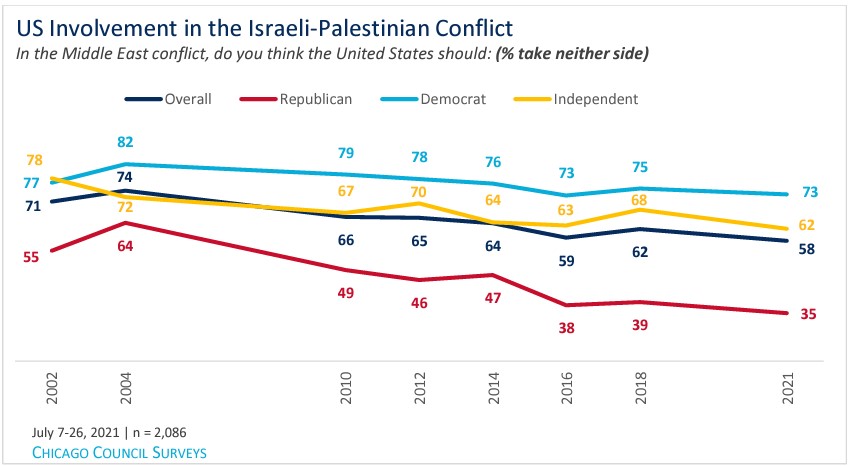 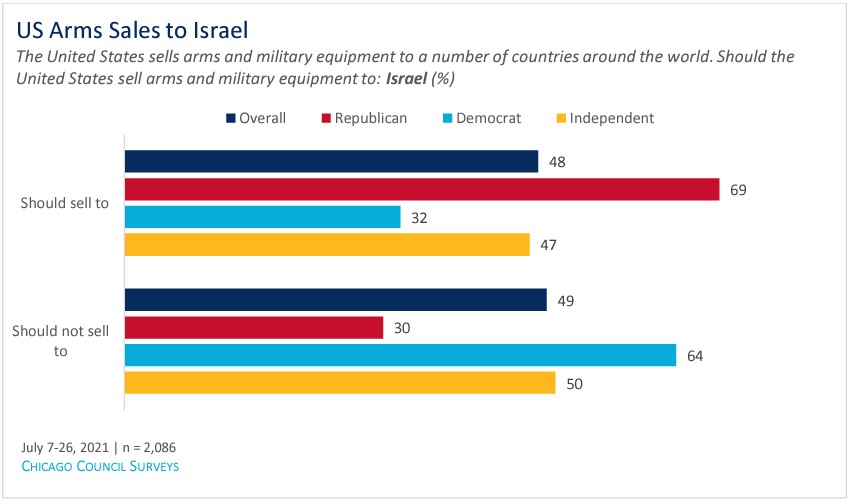 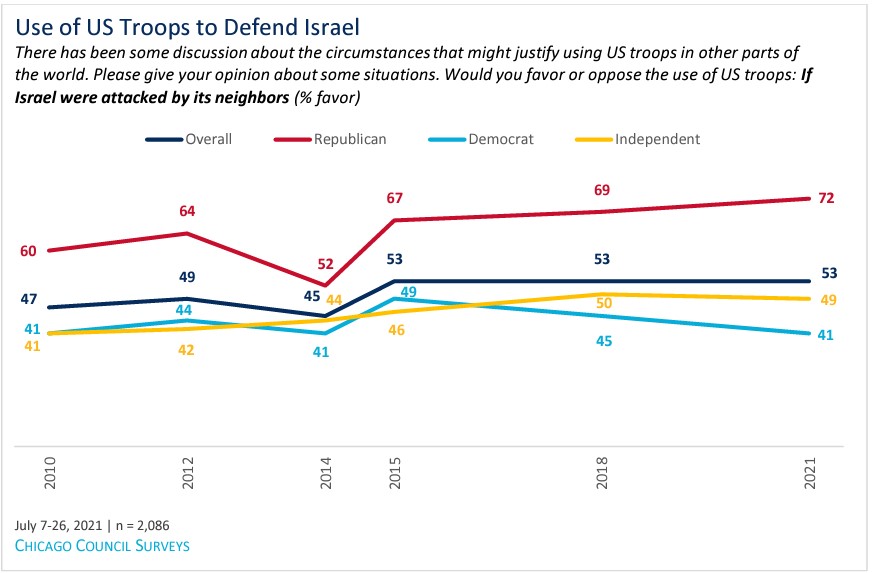