New analysis by Dr. Or Anabi reveals a strong correlation between those who identify as left-wing and their votes for parties categorized on the left. The same applies to Israelis who places themselves in the ideological center. By contrast, the voting patterns of Israelis who identify on the right is more complicated with many voting for parties thought to fall outside of the traditionally-defined right-wing bloc. 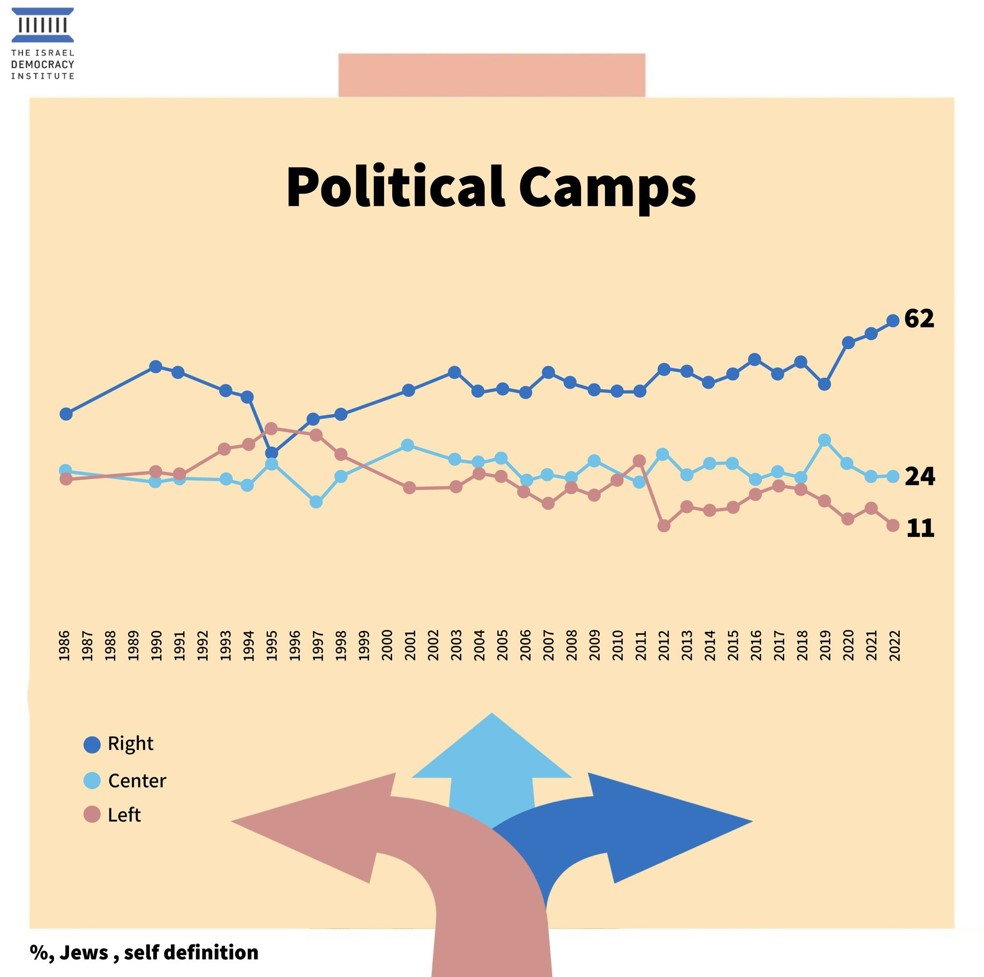 The division into three political camps is based on the positions of Jews only. The Arabs are not a part of the division into right, center, and left. They are a separate group, with their own aspirations and internal tensions, of the sort we have seen between Ra’am and the Joint List over the past year. For example, Ra’am is a conservative party and many of its positions are like those of the Jewish religious parties. On the other hand, its voters believe in liberalism and want to integrate into Israeli society, and many Arabs see themselves as identified with the left.

In 2012, the share of those who belong to the left contracted dramatically (from 28% to 11%), to the benefit of the center, which grew to 30%, thanks to the establishment of Yesh Atid. This is the metric that reflects the social protest, which increased the center’s strength and you cannot detach this from the influence of Yesh Atid, since that is when Yair Lapid first entered politics.

In the first round of elections in 2019, with the establishment of Blue White, identification with the center reached an all-time high of 33%. But from that time on the center has been sliding right and the rhetoric is now focused on who is the “authentic right.” The rise of the center did not produce a significant decline in the right, but derived chiefly from the decline of the left.

If we look at the broader picture painted by the polls, we see that the division into political camps is not only a reflection of people’s positions on various issues on the current agenda, but is also related to deep traits of identity and belonging. People who define themselves as leftists are overwhelmingly secular (83%) and Ashkenazi (61%), with a relatively large share of persons with an above-average income (40%). They tend to vote mainly for Meretz, Labor, and Yesh Atid.

On the other side, those who define themselves as right wing come from diverse groups with regard to religious observance: about a quarter are secular, a quarter are “traditionists,” a third are traditional and religious, and 15% are ultra-Orthodox. The proportion of Mizrahim (45%) in this camp exceeds that of Ashkenazim (32%). Many (39%) have a below-average income. About a third of them voted for the Likud in the last election, with the rest split among the other parties on the right. The center falls between these two camps with regard to its voters’ demographics, but resembles the left more than it does the right.

To examine voters’ characteristics, we looked at six different polls conducted in the past year by the Viterbi Family Center for Public Opinion and Policy Research at the Israel Democracy Institute. We examined the distribution of voters (N= 3,948) for the elections to the 24th Knesset held in March 2021, according to six parameters: Political camp, on the spectrum from left to right, self-definitions of ethnicity, religious affiliation, age, gender, and monthly income.