What explains the aggressive social media attack against President Reuven Rivlin from the extreme right in Israel? IDI Researcher Dr. Amir Fuchs explores the origins of the animosity towards Israel's liberal, right-wing President. 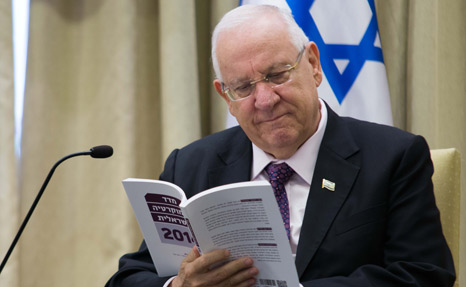 According to a recent survey in Haaretz (May 29, 2015), President Reuven (Ruvi) Rivlin is the most popular public figure in the State of Israel. While the headlines focused on the high level of support that he has from the political left, which may be surprising given his origins in the right-wing Likud party, Rivlin is also very popular among right-wing voters: 81% of voters for Naftali Bennett's Jewish Home party support him, as do 71% of voters for the Likud.

Ever since Rivlin was elected, however, and especially during the last few months, the extreme (and even not so extreme) right in Israel has been waging an aggressive social media campaign against him. Amid curses, threats, and terrible invectives, Rivlin has been accused of being a "leftist," "traitor," "fifth column," and "President of the Arabs," while the less antagonistic responses call for doing away with the institution of the presidency or proclaim "you are not my President."

It seems that the hatred directed toward Rivlin, who is sometimes portrayed by the extreme right as even a greater traitor than members of the political left, emanates from the fact that he is a liberal, right-wing President. His opponents fear the threat of true liberalism in Israel's right-wing camp—the kind of liberalism that champions equality for Israel's Arab citizens and embraces the values of the Declaration of Independence.

President Rivlin devotes a significant part of his work to building bridges between different sectors of Israeli society and especially to cultivating trust among Israel's Arab citizens. Many Arab Israelis report that for the first time, they feel that the President of Israel is also their President. They feel he relates to them as real partners for a shared life in Israel, as evidenced by his statement "we are not doomed to live together, we are destined to live together." In his words and deeds, Rivlin thus signals to his opponents that even on the political right, and even among those who believe, as he does, in Greater Israel, the legacy of Ze'ev Jabotinsky—the Revisionist Zionist leader who envisioned a state in which "the son of the Arab, the son of Nazareth, and my son" would live in peace and prosperity—lives on.

Last week, at the inaugural Dov Lautman Conference on Educational Policy, established in partnership with the Israel Democracy Institute and the Open University, President Rivlin presented certificates of recognition to schools that have shown an outstanding commitment to pursuing cooperation and dialogue between different segments of Israeli society. One of the important findings of research conducted in preparation for this conference, which was discussed at the conference itself, was that Israeli teachers have difficulty educating for democratic values (beyond basics such as the rule of the majority) and addressing hatred and racism in their classrooms because democratic values are perceived as "leftist values" and are seen as political.

The hate campaign against Rivlin reflects this type of equation of democratic values and leftist values. On the right, and especially within the Likud, a battle is raging between contradictory trends. The extremists in this camp are denouncing any liberal statement that respects human rights as "left-wing." This was seen recently when condemnations of the decision to segregate buses in Samaria issued by members of the right, not just the left, were attacked. These denunciations are intended to exclude anyone who preserves Jabotinsky's revisionist spark from the ranks of the right and to pull the Israeli right toward nationalism and away from the values of democracy. A similar move in 2012 ousted Dan Meridor, Benny Begin, and Michael Eitan—moderates who embraced liberal values—from the Likud's list of candidates for the 19th Knesset.

We must salute President Rivlin for his activities, both because of their direct contribution to mending the rifts in Israeli society and because he is an exemplary model of the fact that democratic values are not the purview of the left; rather, they are the values of the State of Israel, which are anchored in the Declaration of Independence. Recognizing that democracy and human rights belong to us all is vital for preserving the character of the State of Israel as a Jewish and democratic state.

A version of this article was published in The Jerusalem Post on June 18, 2015.