In a Times of Israel op-ed, IDI Former President and Founder Dr. Arye Carmon advocates a new approach to educating Israeli school children about the Holocaust, which will humanize both the victims and the perpetrators. 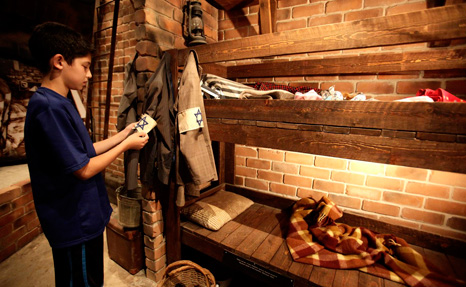 Upon returning to Israel in the early 1970s, after completing my doctorate at an American university on a subject that included groundbreaking research—higher education in Nazi Germany—I developed two experimental textbooks for teaching the Holocaust to schoolchildren with the assistance of David Pur, who chaired the Ministry of Education's Pedagogical Secretariat in the 1970s.

The idea, which was then ahead of its time, was to base the conclusions we draw about this human phenomenon, the most extraordinary in history, on a perspective that views both the victims of the Holocaust and the murderers as human beings who operate in a unique historical reality that is replete with dilemmas. Already at that time, this approach ran counter to the conventional and alienated attitude that viewed the victims of the Holocaust as "others"—exilic and distant people who went (according to the accepted stereotype) like "sheep to the slaughter"—and that viewed the murderers as demonic figures from "another planet," who were detached from any human connection, and in any case unable to develop any moral judgment concerning their actions.

Later, in the 1980s, I worked at the School of Education at UCLA, with colleagues who included educational psychologists and curriculum developers, on formulating principles for a comprehensive curriculum for teaching the Holocaust from kindergarten through 12th grade. Together, we developed pedagogical and psychological tools for addressing the Holocaust as a human phenomenon from which we should draw universal and human lessons, including exploring the meanings of human dignity and recognizing the moral struggle against turning the "other"—whether an individual or a collective—into a victim.

I believed then, and I believe even more strongly today (when my granddaughter writes to me from her class trip in Poland about the feelings she has as an Israeli teenager when encountering the mounds of shoes at Auschwitz), that it is possible, desirable, and even a duty to address the Holocaust, in an intelligent way, starting from early childhood.
Against this background, I was glad to receive an invitation from Minister of Education Shai Piron to participate in a discussion held a few months ago in his office, together with the heads of Yad Vashem, about the principles of a K to 12 curriculum addressing the lessons of the Holocaust.

In this forum, I presented my view that we cannot confine—in an artificial way (and thus not always an educational way)—discussion of this complex subject to "Holocaust Remembrance Day." On the contrary, it should be woven into the curriculum, layer by layer, emotionally and cognitively, throughout the stages of the pupil's development during his or her years at school. The overall curriculum should itself be based on and derived from two overriding objectives:

There is cause for concern about the media's reports about the new plan to address the Holocaust from early childhood. At first glance, it appears that this plan is not based on clear objectives and a pedagogic outline derived from them. It seems that the program's point of departure is the desire to address the potential repercussions of exposing children to the helplessness of the Jewish victim, on the one hand, and to the Nazi evil, on the other hand, on Holocaust Remembrance Day.

If this is indeed the case, it is a regrettably misdirected effort to achieve worthy educational goals. Even worse: It appears that we are returning to the trap of "the macabre symmetry" engendered by the alienation from the inhuman murderer, on the one hand, and from the helpless victim, on the other hand, in the sense of "us" and "them."

Evil in itself should not be a focus of education, certainly not in early childhood. But Jewish life in Europe contains inexhaustible wealth and by getting to know its treasures and studying them over years, our children can gain an understanding of the significance of the devastation and a sense of loss during the more advanced stages of their cognitive development. Similarly, recognition of the human tendencies to stereotype and emphasize the "otherness" of someone who is different is likely to stir the appropriate moral sensitivity toward the attempt to turn other people into victims.

The multifaceted Jewish life, the experiences of Jewish children, our cultural discoveries, and more are part of the diverse content that could be addressed without necessarily being "attached" to Holocaust Remembrance Day. We should aspire to become closely familiar with the Jews "there" as human beings who are similar to us "here." This is what we should focus on in early childhood. Not fear mongering, not the helplessness of the victim, and certainly not the atrocities.

Freeing the educational process from the artificial buttress of Holocaust Remembrance Day ceremonies is the correct way to engage in serious, continuous, and long-term educational efforts to address the human and Jewish lessons of the Holocaust. It is also the condition for eliminating simplistic and belligerent elements expressed in slogans such as "never again," "from Holocaust to revival," "the Nazi beast," and "they went like sheep to the slaughter," from the discourse on the Holocaust.

Dr. Arye Carmon is the Former President and Founder of IDI.

A version of this article was published in the Times of Israel on April 28, 2014.