MK Meir Sheetrit presents his views on the institution of the Israeli president and describes what he would bring to the job, in the first of a series of articles by the presidential candidates of 2014. 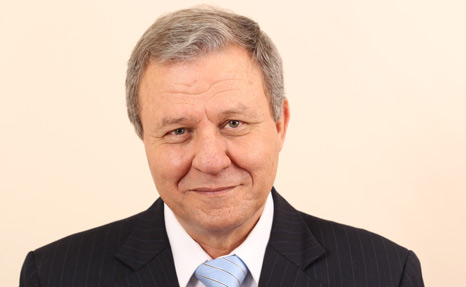 It is no secret that the presidency in Israel is mainly a symbolic institution. The president does not serve in an executive role, does not engage in politics, and is not supposed to be involved in shaping the state's foreign and defense policies. These roles are reserved for the executive and legislative branches. The president, however, in his primary role as the figure that unites the people of Israel, has a unique ability of unparalleled importance: He can spotlight anything he chooses in the state and in Israeli society.

That is the reason why I decided, particularly at this time, to run for the position of the 10th president of the State of Israel. As I mark exactly 40 years of public service, I want more than anything to shine a spotlight on the dark corners of Israeli society, and especially to illuminate the regions and populations that suffer from distress, poverty, inequality, and social and economic disparities.

With all due respect to the other presidential candidates, I am convinced that the combination of my background, my rich experience, my proven record over the years in a range of areas, and the approach I believe in—which is based, first and foremost, on a personal, human relationship of equals toward every person and community, irrespective of religion, nationality, gender, education, economic status, or ethnic origin—make me the most suitable candidate for illuminating the dark corners in Israeli society and for strengthening unity within our society.

For those who do not know, I was born as the State of Israel was founded, in 1948, in Ksar es-Souk in Morocco. I made aliyah to Israel with my parents as a nine-year-old in 1957. We settled in Yavneh, which was then a poor and primitive community, where I still live with my wife Ruti and our children Dudu and Naama. After serving in the Israel Defense Forces as commander of the Officers Branch in Training Base 10, and after fighting as the operations officer of Division 252's medical battalion in the Yom Kippur War, I was discharged from the IDF with the rank of captain in December 1973 and decided to run for mayor of Yavneh.

I was elected mayor on February 1, 1974 and until I stepped down in 1987, I led a great transformation in Yavneh—a city that had serious crime, high unemployment, negative migration, and a low level of services—in the fields of education, employment, quality of life, and the environment.

The first priority was education. I instituted, for the first time in Israel, individualized instruction for each student, with individual attention to weak and outstanding students alike, in collaboration with the Ministry of Education, Tel Aviv University, and the Center for Educational Technology. Educators and mayors from throughout Israel came to Yavneh to learn about our innovative approach in those days, which changed the face of the city, the composition of its population and, above all, its education system.

In 1981, I was elected to the Knesset, where I have served ever since, except for four years (1988–1992), when I served as treasurer of the Jewish Agency and World Zionist Organization (WZO). My roles in the Knesset have included: deputy speaker, coalition chairman, head of the Likud faction, chairman of the Defense Budget Committee, and chairman of the Knesset Computerization Committee. I was also a member of the Finance Committee, Foreign Affairs and Defense Committee, Constitution, Law and Justice Committee, Education Committee, House Committee, Committee on the Status of Women, and more. In the Knesset, I have sponsored and worked to enact many laws that affect our lives, including the Long School Day Law, legislation to lower the purchase tax on apartments for young couples, raising the minimum wage from 45% to 47.5% of the average wage, granting sixty days of leave to parents of a child undergoing chemotherapy treatment for cancer, the Genetic Privacy Law, the Cable Television Law, cancelling import duties on computers and computer accessories, prohibiting members of Knesset from receiving income from additional sources or from serving as a company director, and much more.

As treasurer of the Jewish Agency and World Zionist Organization from 1988–1992, when the gates of the Soviet Union opened, I had the historic privilege to set up the infrastructure for the immigration from the former Soviet Union and to arrange for the flights of hundreds of thousands of new immigrants to Israel. For this purpose, we conducted a fundraising campaign throughout the Jewish world that raised approximately $1 billion a year. At the same time, I was responsible for Operation Solomon, in which the Jewish Agency airlifted 14,000 new immigrants from Ethiopia to Israel in a single day. The Jewish Agency's finance department was also responsible for absorbing the new immigrants from Ethiopia and providing housing for them in Israel until they moved to permanent housing.

Since 1996, I served in the governments of Netanyahu, Sharon, and Olmert, as Minister of Finance; Minister of Justice; Minister of Education, Culture and Sport; Minister of Transportation; Minister of Housing and Chairman of the Board of the Israel Lands Administration; Minister of the Interior, and Minister Responsible for the Secret Services. Space does not allow me to cite the many and diverse activities that I conducted in these ministerial positions. For this reason, I will note just a few representative examples:

As Minister of Finance in the first Netanyahu government, I eliminated the property tax, which was distorted and unduly harmed millions of citizens. I ran a program in which all residents of Amidar and Amigur public housing projects could purchase their apartment from the government housing company with a discount of up to 80%, depending on the number of years that they had resided in the apartment. Thanks to this program, thousands of families realized their dream of buying an apartment that they will be able to bequeath to their children, and were able to stop paying rent. Later, in 2003–2004, as a minister in the Finance Ministry working alongside Minister of Finance Benjamin Netanyahu during the Sharon government, we led a revolution that lifted the Israeli economy out of a severe recession and from negative growth and high unemployment to positive growth that has continued until today.

As Minister of Justice in the first Sharon government (2001–2003), we amended the Mortgage Law such that it was impossible to evict families from their homes because of a small debt or delinquency in payments to the banks and their law firms. Before this law was enacted, the courts issued some 8,000 eviction orders a year to remove families from their homes due to delinquent mortgage payments. The legislation solved the problem in about 95% of the cases, which would otherwise have resulted in the families being thrown out of their homes. In addition, the Traffic Fines Law was amended so that the double fine mechanism would not result in the revocation of the licenses of hundreds of thousands of drivers; the Shin Bet Law and the War on Organized Crime Law were enacted; judicial reforms were instituted, and the Ombudsman's Office of the Israeli Judiciary and the Israel Money Laundering Prohibition Authority were established.

As Minister of Transportation in the second Sharon government (2004–2006), I led a long series of reforms that included the establishment of the National Roads Company to replace the Israeli Public Works Department (Ma'atz); the preparation of a five-year work plan and allocation of NIS 19 billion to pave roads throughout the country; the completion and inauguration of the Jubilee Port in Ashdod and the new Ben-Gurion Airport 2000 terminal; signing a contract and commencing work on the Carmel Tunnels; starting development work at Haifa Port; planning the continuation of Road 6 toward Kiryat Shmona in the north and Dimona in the south and paving extensive sections of the road; signing a contract and commencing work on Road 431; planning Road 531; operating the railway company, preparing a five-year work plan, and allocating NIS 20 billion for conducting the work; development and expansion of rail tracks throughout the country and opening new railway stations in Ashkelon, Modi'in, Ben-Gurion Airport, Dimona, Lod, Ben-Gurion University, and Lehavim, and more.

During my time as Minister of Housing in the Olmert government (2006–2007), I led the passage of the Rental Apartments Law, which offers tax incentives to developers who build long-term rental units for young couples; the Israel Lands Administration allotted land for the construction of 13,000 rental apartments; the assistance for protected housing for new immigrants was increased; rent assistance was increased for families in need; discounts were increased for public housing residents who purchase their apartment; a national plan was drafted for addressing the needs of the Bedouin sector; 15 community centers were built in the Arab local authorities; 50 synagogues were built; Resolution 979 was approved, which defines the rights of farmers to their residential plot; a capitalization campaign was conducted to enable families to pay a 4% leasing fee on their apartment and register it in their name in the land registry (Tabu) without paying perpetual leasing fees; the "Build Your Own Home" policy was revised in all of the development towns and in the minorities sector so as to give the local residents preference in tenders; and more.

As Minister of the Interior and Minister responsible for the Secret Services in the Olmert government, the Immigration Authority was established after a decade of foot-dragging and it was given the authority to deal with foreign workers; an advanced computer system was installed at all of Israel's borders and crossings, whether land, sea, or air; a national fire firefighting authority was established; an agreement was reached with Arab and Druze local authorities to encourage the establishment of regional employment zones and improve the payment of water bills and municipal taxes; the districts of the Ministry of Interior were strengthened; the ministry began issuing biometric passports and identity cards based on an electronic signature, which enable people to receive government services via a computer; and much more.

In order to be effective in turning the spotlight on the problems of housing and the homeless, the disparities in education, and the gaps in quality of life and equality of opportunity between secular and ultra-Orthodox Jews, between Jews and Arabs, and between residents of central Israel and residents of the periphery and confrontation line communities, and in order to promote real and rapid solutions rather than just talk, the State of Israel needs—now more than ever—a president with firsthand knowledge of these issues. Someone who personally knows both the problems and the solutions. Someone who has had contact with all levels of the public and all types of populations. Someone who has expertise in the intricacies of the political and government system. Someone who knows how to mobilize the Jewish Diaspora and the international community. Someone who himself did not grow up with a silver spoon in his mouth.

I am convinced that the knowledge and experience I have acquired in Israel since I first moved into a small and rickety shack with my parents as a new immigrant from Morocco have equipped me with the best tools for unifying, illuminating, and ensuring that things really happen and move forward.

After forty years of public activity, I have no intention of returning to the political arena from the President's Residence. From my perspective, the Presidency of Israel is the last and most important stop in my public life—a stop at which I would refrain from any involvement in political issues and controversial questions, and I would focus on the threat that I think poses the greatest risk to the State of Israel: the social threat.