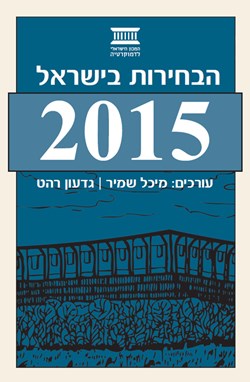 This collection of articles addresses the divisions in Israeli society, from the perspective of voters; media coverage and polling organizations; political parties and the personalization phenomenon in politics

Campaigns for the 20th Knesset began in an atmosphere of uncertainty as to the exact reasons for holding snap elections, and ended up highlighting cracks in Israel's collective identity.

This collection of articles addresses the divisions in Israeli society, from the perspective of voters; media coverage and polling organizations; political parties and the personalization phenomenon in politics.
In addition to the behavioral and media aspects, this series analyzes the 2015 parliamentary elections and current state of Israel's party system from an institutional vantage point. This approach takes into account the changes made to the electoral threshold requirement and its effect on Arab representation.

On March 17, 2015 elections to the 20th Knesset were held, just over two years after Israelis citizens had voted for the 19th Knesset. At the time, the reasons behind the rapid disintegration of the third Netanyahu government were unclear.

The fracturing of the political alignment that had been in place since the 1977 'upheaval' had a profound effect on various population groups. The 2015 elections, which featured a Likud party campaign that increasingly blurred the lines between campaign sloganeering and incitement, emphasized these societal fissures. The political opposition, the Left and Leftists, were constantly linked with Arabs, be they Palestinians and ISIS from without or Arab citizens of Israel from within. In this context, special attention was given by the Likud election campaign to leaders of the Arab population in Israel, who were contrasted in stark terms with the country's Jewish identity and the political Right.

This division, which was the driving force behind the 2015 election, is the focus of many of the articles in this collection, which address this development from a variety of perspectives. Michal Shamir, Shira Dvir-Gvirsman and Raphael Ventura analyze the attitudes of voters; Yariv Tsfati and Camille Fuchs study Israel's media and polling organizations, while pieces by Asher Cohen, Menachem Lazar and Daniel Zucker explore the role of Israel's political parties during the 2015 electoral contest. In addition to the behavioral and media-related perspectives, several articles dissect the elections and Israel's party system from an institutional angle. This method of analysis also reveals clear signs of an increasingly divisive public discourse, especially as it pertains to the raising of the electoral threshold and this development's effect on Arab representation in the 2015 elections. This issue is the topic of an article by Raz Eizenberg and Liran Harsgor.

Other aspects of the 2015 Knesset elections reflected the high degree of personalization in Israeli politics. An article by Shahaf Zamir and Gideon Rahat focuses on the political parties' and politicians' use of the Internet, primarily Facebook, during these elections.

Relatedly, the decline of Israel's major political parties, increasingly fractured nature of the Knesset and volatile voting patterns are elaborated on in a piece by Ofer Kenig and Or Tuttnauer.