The first day of the 20th Caesarea Economic Policy Planning Forum, which was called the Eli Hurvitz Conference on Economy and Society in 2012, opened with a session on pension savings in Israel. Seventeen years after the introduction of pension reforms, Israel is still confronting the challenge of ensuring economic security for pension savers at the time of their retirement. The working group's research and recommendations, which were presented at this session, as well as the input generated by small groups of experts during the session itself, can help decision makers in determining future policy. Highlights of this session can be found below, and the entire session can be viewed in Hebrew or with English voice overs in the Broadcast Center. 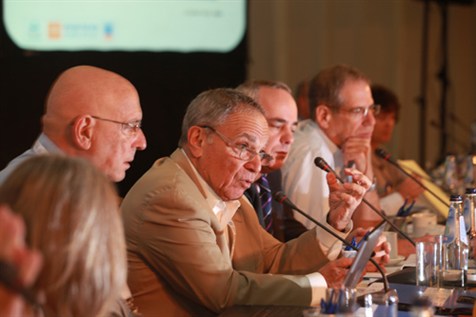 Read a summary of the working group's recommendations

Minister of Finance Dr. Yuval Steinitz opened the session by welcoming the participants to "The 20th Caesarea Conference—the most important and serious economic conference in Israel," adding that "it is good that there is one conference in Israel dedicated to macroeconomics." The Finance Minister said that he was pleased that this year's conference was named in memory of industrialist and visionary Eli Hurvitz, "a man we all greatly appreciated, who contributed a great deal to Israel's economy and industry and served as a member of the Minister of Finance's advisory team for the last three years."

The session, which dealt with the management of pension funds and their impact on capital markets, then continued with a presentation of the working group's recommendations by Prof. Eytan Sheshinski , the Hebrew University economist who headed the government committee that reformed Israel's tax policy on natural resources. "The issue of pensions is keeping the entire world busy," he said, adding that the rise in life expectancy and parallel drop in financial returns is of great concern. He pointed out that increased life expectancy, which is growing at the rate of one year every decade, is accompanied by rising health care costs.

Sheshinski referred to research on the issue of severance pay and its dramatic impact on pension savings. He pointed out that when Israelis are fired, they often withdraw their severance pay, rather than leaving it in their pension funds—a practice that damages their future pension benefits. He recommended an increase in unemployment compensation, both in amount and duration, as a possible solution, pointing out that unemployment compensation is extremely low in Israel as compared to the rest of the world. "If we were more generous," he explained, "this would have a positive effect on pensions. People would withdraw less severance compensation if they are fired and those funds would accumulate for their pensions."

Yarom Ariav, director of the conference, explained the goal of the session as follows: "Our assumption is that anyone who bothers coming all the way to the Dead Sea is coming to invest and contribute to society with their collective wisdom and to aid policy makers. Our goal is for this collective wisdom to highlight the issues that are most vital for the future of pension savings, on the assumption that this accumulated wisdom can serve as valuable input for policy makers when they set priorities." Following this introduction, participants were split into working groups tasked with ranking fifteen issues related to pensions in terms of their importance for policy. The participants ranked the rise in life expectancy most important, the increase in the retirement age of women as second, and the effect of severance pay on pension savings third. These rankings determined the issues that would be addressed by the plenum.

When the forum reassembled, experts who contributed to the discussion included: Ms. Esther Dominissini, Former Director General of the National Social Security and Chair of the Hadassah Medical Organization; Mr. Aharon Fogel, Chairman of the Board of the Migdal Insurance Company; Ms. Yael Andorn, CEO and President of the Amitim Senior Pension Funds ; Ms. Meirav Arlosoroff, Senior Business Columnist for The Marker; and Prof. Oded Sarig, Commissioner of Capital Markets, Insurance and Savings of the Ministry of Finance.