Royal Rimonim Hotel, the Dead Sea The 20th Caesarea Economic Policy Planning Forum was called "The Eli Hurvitz Conference on Economy and Society," in memory of Eli Hurvitz, chairman of Teva and former Chairman of the Board of IDI.

On Wednesday and Thursday, June 27–28, 2012, IDI and the College of Management Academic Studies convened The 20th Caesarea Economic Policy Planning Forum at the Royal Rimonim Hotel at the Dead Sea. A joint project of IDI and the College of Management Academic Studies, this year's conference was called "The Eli Hurvitz Conference on Economy and Society," in memory of the late Eli Hurvitz, chairman of Teva and former Chairman of the Board of IDI, who was a model of integrity, strategic thinking, long-term planning, honest leadership, and the integration of economics and society. According to conference director Yarom Ariav, the aim of the conference was "to enhance economic and social discourse, and to serve as a vibrant and productive encounter between different views and different sectors of society, which will come together to discuss critical economic issues on Israel's agenda. 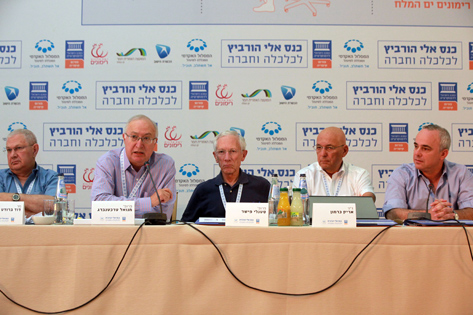 This year, conference organizers sought to address the Israeli public's growing interest in social and economic questions. For the first time, the organizers solicited input from the public prior to the conference by means of social media campaigns, which facilitated in-depth, constructive dialogue. A selection of views expressed on the website and in the animated discussion on Facebook were then presented to decision makers at the conference itself.

8:30 a.m.–9:30 a.m.
Registration and Greetings
With the participation of Mr. Dov Litvinoff, Mayor of the Tamar Regional Council

Are the Financial Media in Israel Independent?

With the participation of Minister of Finance, Dr. Yuval Steinitz

Moderator: Prof. Stanley Fischer, Governor of the Bank of Israel

Address by Prof. Manuel Trajtenberg, Chairman of the Planning and Budgeting Committee, Council for Higher Education in Israel

2:30 p.m.–7:00 p.m.
Work Session:
An Equal Burden or the Burden of Equality? The Ultra-Orthodox and the Draft: Alternatives to the Tal Law

Alternatives to Promote Participation in the Burden
Gilad Malach, Content Director of the Committee; School for Public Policy, Hebrew University of Jerusalem