On Thursday, June 28, the 20th Caesarea Economic Policy Planning Forum held a session that discussed options for encouraging ultra-Orthodox men to serve in the Israel Defense Forces and integrate into Israeli society. The discussion came as a political firestorm erupted over developments in the Committee to Advance Equality in Sharing the Burden (the Plesner Committee), which was organized in May to provide a solution to the divisive issue. Ultra-Orthodox politicians cried foul at the committee's expected recommendation of imposing "personal sanctions" on draft-dodgers from their community, while Yisrael Beitenu left the committee over its decision not to require service of Arab Israelis. MK Yohanan Plesner, chairman of the Committee, participated in the session just before this dramatic departure was announced. 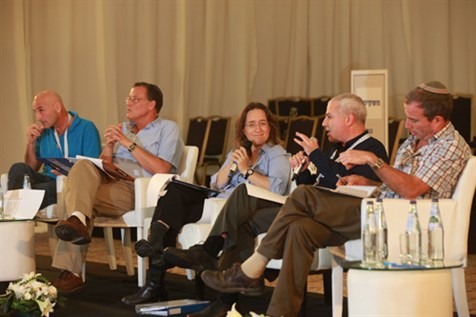 Presentation of Recommendations and Discussion

The discussion, which included panelists MK Yohanan Plesner (Kadima), Chairman of the Committee to Advance Equality in Sharing the Burden as well as Committee members IDI Vice President Prof. Yedidia Stern and Attorney Yaakov Weinroth, began with a presentation of recommendations by Gilad Malach of the School of Public Policy at the Hebrew University, who serves as the content director of the Plesner Committee. These included a recommendation to incentivize military service by using a model similar to that used among the Religious Zionist community and to encourage participation in the workforce rather than extended religious study.

Opening the discussion, Prof. Stern stated that the Plesner Committee had not yet reached its conclusion “despite,” he said, “what the papers say.” While affirming the focus on ‘sharing the burden,’ Stern evoked the ethical imperative that any agreement respect the integrity and viability of the ultra-Orthodox lifestyle. “In a certain sense, the minority culture needs protection from the majority,” he said. “....We must make sure that someone who enters the army as ultra-Orthodox can also exit it as ultra-Orthodox.” Stern also said that in addition to achieving equality and economic uplift, a third goal of an arrangement that would require ultra-Orthodox Jews to share the burden of defense should be to “promote solidarity” by softening the tone of political discourse. “Demonization of the other is a growing trend,” he said, adding: “It is political power to hate the Other.” Stern cautioned that the solution that will be proposed will not achieve its goals immediately, setting a timeframe of 5-6 years until a majority of ultra-Orthodox men of draft age are serving in the military. In arriving at such a solution, he said, “we will have created the next generation of Zionists.”

Opening his remarks, MK Plesner warned that the absence of a solution could spell both “the collapse [of the IDF] as a people’s army” and an equally grave economic crisis. Stating that every 18 year-old should serve in some capacity, Plesner called for a comprehensive solution that would deal not only with ultra-Orthodox men, but also with other groups currently exempt from military service: “religious Jewish women, Druze women, and Arab men.” He stated that all these groups must be integrated without creating what he called “a parallel army” with a different ethos for each group of citizens. Addressing ultra-Orthodox men specifically, he stressed the need for a flexible solution that both incentivizes service and guarantees conscription before age 22. Finally, Plesner noted that a model without consequences for refusing to serve “would be good only on paper,” a sentiment that puts him squarely at odds with ultra-Orthodox politicians wary of his committee’s results.

While reiterating the critical need for a solution, Lt. General (Ret.) Orit Adato, former head of the defunct IDF Women’s Corps, stated that ultra-Orthodox men should have the option of serving in special units, which allow for “a women-free environment that maintains the ultra-Orthodox lifestyle.” She argued that only after an integration process with “external follow-up and supervision” could the state deal with military service of religious women, an issue she described as “sensitive.”

For his part, IDI President Dr. Arye Carmon spoke more generally about ultra-Orthodox integration into society. Carmon stated that unlike the Religious Zionists, for whom the State of Israel is a “sacred value,” the ultra-Orthodox view the state as what he called a “shell,” an attitude that prevents their integration in Israeli society. Carmon noted, however, that signs of interest in integration have appeared, albeit hindered by  conservative backlash. He warned that the attempt to require the Haredim to "share the burden of service" could backfire by strengthening those conservative elements.

Mr. Eyal Gabbai, former Director General of the Prime Minister’s Office (2009–2011), was next to tackle the issue, noting as others that the current situation is untenable. Gabbai stated that there is a choice between military service and other forms of social involvement, and that this choice must take into account the ideological motivations of the community. Above all, Gabbai stressed that the ultra-Orthodox must be impressed by the state’s commitment to ending the current situation. “You want to study Torah?” he said. “Fine, but on your dime...You won’t get stipends based on the fact that you're not working or generating an income.”

Former Deputy Governor of the Bank of Israel Prof. Zvi Eckstein focused on national civil service, an alternative to enlisting in the army. Noting the flaws of such service in its current form (“18 year-olds are not the teachers we want to give our children,” he said), Eckstein stressed that the system must not cause ultra-Orthodox men to feel punished. He added that any arrangement must also permit ultra-Orthodox men to work, something that the current arrangement does not.

Economist Prof. Manuel Trajtenberg addressed the Plesner Committee directly, calling it “perhaps the most important committee to arise in recent years.” Trajtenberg himself headed an extremely high-profile committee formed in response to the social protests of 2011 to address the rising costs of living. “Yohanan,” he said, turning personally to Plesner. “You have an opportunity to produce a report that is not just a set of recommendations, but a statement.” Such a statement, he elaborated, will be a “compass that shows us the way, even it’s not all implementable tomorrow.” Trajtenberg, who serves as an official in the Israeli Council for Higher Education, noted optimistically that over 6,000 ultra-Orthodox men are currently enrolled in academic institutions—and the Council is taking steps to triple that figure. “It will never again be the case that ultra-Orthodox education is only in ultra-Orthodox frameworks,” he said.

Rabbi Bezalel Cohen, a fellow at the Mandel Leadership Institute, argued against the idea of opposing sides or of a conflict of interest between Torah study and military service. “We are all basically on the same side,” he said. “The ultra-Orthodox have no less interest in changing the situation.” He used the example of the United States—where, Cohen estimated, 70% of ultra-Orthodox men are out of yeshiva by age 24—to demonstrate the feasibility of integrating the ultra-Orthodox into the workforce.

Former MK Amram Mitzna, retired general and former Labor Party chairman, pointed out what he called “the significant contradiction between the concept of military service and entering the workforce.” Asserting that one of these options must be chosen over the other, Mitzna sided with integrating the ultra-Orthodox into the workforce. He said that military service, “a Pandora’s box” in his words, would simply intensify the already problematic entanglement of religious interests in the military.

Echoing Mitzna’s comments, Finance Minister Dr. Yuval Steinitz (Likud) stated that employment is a more important issue than military service. While the IDF can survive without the ultra-Orthodox, Steinitz said, the continued absence of the ultra-Orthodox in the workforce will cause “grave damage to the national, social and economic strength of the State of Israel.” He acknowledged that military conscription is a more “emotional” issue, but said that the critical issue for Israeli society is “freeing the ultra-Orthodox from the yeshivas and enabling them to work.” Steinitz proposed what he called the “22+2" law,” which would exempt from military service any man aged 22 who is married and has two children. Steinitz said this option made more economic sense that the options of national service or mass conscription of Haredi men at age 18 or 19.

The session continued with a conversation between Attorney Jacob Weinroth, the representative of the ultra-Orthodox community on the Plesner Committee, and Dr. Gadi Taub of the Federmann School of Public Policy and Government at Hebrew University. The discussion was moderated by television journalist Dr. Ilana Dayan.

Attorney Jacob Weinroth took the discussion in a different direction, claiming that policymakers are arguing over a community whose worldview they do not truly understand. He stressed that in trying to arrive at a consensus between different outlooks and communities it is important to be recognize the limits of the other side. He lambasted the Plesner Committee for assuming that applying sanctions will make military service an enforceable policy. “I’m telling you that negative incentives... will only make ultra-Orthodox society withdraw more.” Weinroth added that what really needed to be addressed was a core issue beyond the scope of the law. “This is a problem of... two communities that don’t talk to each other, that hate each other.” The Committee, he said, is simply “throwing theories into space.”

Major General Elazar Stern dismissed the idea of "sharing the burden," stating that no solution that is found for the ultra-Orthodox issue will entail the same “risk of life” as mass military service. He proposed instead that the ultra-Orthodox be given 10 years to do what they please, during which time—he believes—many would choose to enter the workforce. Stern claimed that this simple change would lead to deeper social transformations. “When we break down that wall...and they see that the ‘demon’ isn’t so bad,” he said, “....afterwards, they’ll want to serve with us, even with the goal of getting ahead in employment.”

Prof. Yishai Beer described what he called the “shameful” situation in which mainstream Israeli politicians have “handed over the ultra-Orthodox [to rabbinic authorities].” “The absurdity,” he said, “is that we are paying for it. We are guilty.” While not offering specific guidelines, Beer stressed the centrality of cutting off this funding of the ultra-Orthodox community, which, he asserted, contributes to the denial of the basic right of ultra-Orthodox individuals to self-definition.

Journalist Ofer Shelah continued on a similar stream of thought, first analyzing the relationship of the State of Israel to its citizens. “There are groups of citizens who receive something like citizenship, something like obligations in exchange for something like rights,” he said. Shelah explained that no one form of service fits each group; nor does a model of one form for all provide for the security needs of the state. “The model must be differential,” he said, adding that the essential factor is that all 18 year-olds do some service. It is up to the state to decide what kind of service it needs, Shelah argued—choosing specifically to circumvent the obvious issue of civilian versus military service.

Prof. Momi Dahan discussed the consequences of the current arrangement on the legitimacy of the state. “The ultra-Orthodox population has broken the contract of the welfare state,” he said, citing the fact that many receive benefits without having looked for work. Dahan then stated that some ultra-Orthodox people, never mentioned by out-of-touch politicians, have begun entering the workforce. Dahan called for what he called a “much more ambitious” version of Minister Steinitz’s “22+2" law, which would accomplish the same goal of integrating ultra-Orthodox men into the workforce without waiting for marriage and children. Like Gen. Stern, Dahan said that “opening windows” for the ultra-Orthodox in the economic sphere would ultimately lead them towards military service.