Are the financial media in Israel independent? How does the media business impact the market and public discourse? These questions were the focus of a session on the first day of the 20th Caesarea Economic Policy Planning Forum, which was called the Eli Hurvitz Conference on Economy and Society in 2012. The session opened with the presentation of the findings of the Forum's working group, and continued with a panel in which media figures, politicians, and members of Israel's business community shared their experience and insights. Highlights of the session can be found below, and the session can be viewed in Hebrew or with English voice-overs in the Broadcast Center. 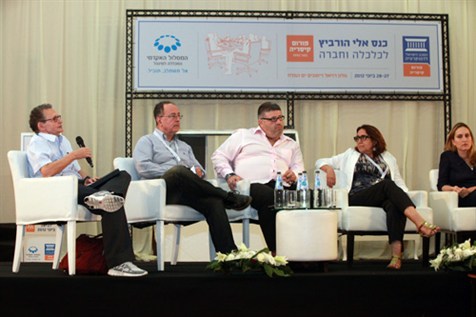 The session opened with a presentation of the findings a working group of six experts in media, economics, law, and labor relations, which was headed by Dr. Roei Davidson of Haifa University. Presented by Dr. Davidson and Attorney Didi Lachman-Messer, former Deputy Attorney General of Israel, the report critiqued the fact that Israel's largest newspapers and business dailies are owned by a handful of powerful businessmen. It indicated that its authors are not optimistic about the prospects for an independent, critical financial press in Israel and concluded that many institutional barriers are hindering creative and critical coverage of economic issues. Some of the members of the working group called for the strengthening of public media bodies through government funding and philanthropy, which could pave the way for a more "muscular" investigative financial press.Moderated by television journalist Emmanuel Rosen, the panel discussion that followed included individuals with varied backgrounds in the field of financial media, ranging from a wide selection of senior financial journalists—both broadcast and print—to former members of Knesset and business leaders. None of the panelists disputed the claim that Israel's financial media, indeed the media as a general phenomenon, feature distinct agendas and are impacted by outside influence. Disagreements arose, however, of the nature of those agendas and the breadth of the influence.

Guy Rolnik, Founder and Editor-in-Chief of The Marker, a financial daily, for example, acknowledged candidly that his newspaper has a specific agenda, but held that it is the paper's staff—not the owners—who set and maintain that agenda. He also addressed the challenges facing print journalism is and the role of media in democratic society. Businessman Uri Dori criticized the management of financial media, along with MK Roni Bar-On, who argued that the media is not really free. Former MK Haim Oron said he appreciates the media but it frequently lacks proper context. Israeli Finance Minister Yuval Steinitz ended this part of the session with criticism of economic newspapers for promoting specific agendas. Hanoch Marmari, the former Editor of Haaretz, and Dr. Arye Carmon, President of the Israel Democracy Institute, then responded to questions from those present.

Among the most vehement critics of the current system was Keren Marciano, economic affairs reporter for Israel's Channel 2, who went so far as to state that she would not invite fellow panelist Yehuda Sharoni, an editor and commentator for the Ma'ariv daily, to participate in a televised discussion about his paper's owner. Sharoni, who took offense at Marciano's statement, was on the other side of the debate. He defended the editorial independence of Ma'ariv and of the press in general, claiming that their coverage is independent and represents a variety of viewpoints. Publicist Ran Rahav praised the media for their work and Mr. Gideon Tadmor, CEO of Avner Oil Exploration, argued that the media should not be responsible for every offense individuals in the business might commit. The session closed with comments from Didi Lachman-Messer and journalist Moshe Shlonsky.