A highlight of the second day of the 20th Caesarea Economic Policy Planning Forum, which was called the Eli Hurvitz Conference on Economy and Society, was an address by Prof. Stanley Fischer, Governor of the Bank of Israel. Governor Fischer shared his thoughts on the current state of the Israeli economy and responded to Prime Minister Netanyahu's announcement that the deficit will be increased to 3%, a decision that was echoed by Finance Minister Yuval Steinitz at an earlier session of the conference. Highlights of the session, which can be viewed in Hebrew or English in the Broadcast Center, can be found below. 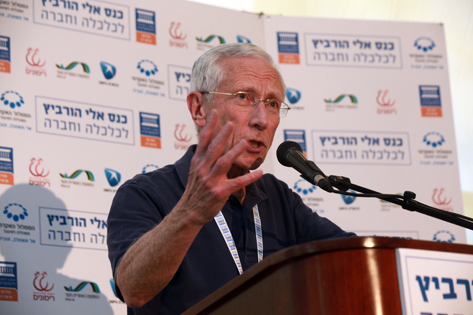 Governor of the Bank of Israel Stanley Fischer criticized Prime Minister Netanyahu's decision to increase the deficit to 3%, warning that Israel is at a dangerous turning point and that the government’s proposed deficit of 3% must be reduced to 2.5%.

Fischer said that serious measures must be taken in light of the danger that the economic crisis hitting Europe will deepen. He estimated that the chances that the European bloc will begin to disintegrate due to the crisis are “under 50%.”

The Bank Governor warned that Israel’s current economic situation is not as strong as it was in 2008 when the last recession hit. He expressed fears that if the European economy continues to deteriorate, Israel will not fare as favorably as it did in the past.

Fischer added that Israel can no longer count on the US to help bail it out. “The last time this happened," he said, "we had to run to our rich uncle for guarantees. But there is a problem with our rich uncle today: He’s not so rich and not as friendly.”

Observers noted that Governor Fischer seemed to be warning the government of the possible consequences of irresponsible financial steps. Fischer remarked that if fiscal policy does not remain disciplined, “I do not expect that the Monetary Committee will be able to keep interest rates at the low level they are now….”

Fischer concluded his address by calling on the Israeli Government to cut spending and formulate a realistic budget that will lead to future stability and prosperity. “I see the strength of the economy as no less important for Israel’s survival than the need for military strength," he added. "If we do not safeguard our economy, we will not be able to cope with the other challenges we are facing.”

At the end of the session, IDI President Dr. Arye Carmon, who had spoken briefly prior to Bank Governor Fischer, thanked Shlomo Dovrat for his term as Chairman of the Board of the Israel Democracy Institute and congratulated incoming chairman Amir Elstein.