The Israel Democracy Institute and the Hebrew University of Jerusalem hosted a special conversation with the Rt. Hon. Tony Blair, Executive Chairman of the Institute for Global Change & Former Prime Minister of Great Britain and Northern Ireland, and Pulitzer Prize columnist Thomas Friedman to discuss “The Future of Democracy and Globalization in the Age of Corona”. 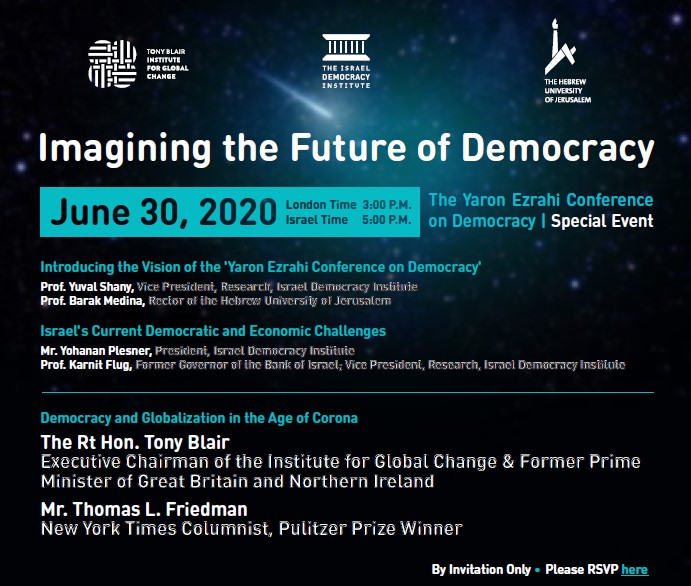 In the discussion on political polarization and the future of democracies:

Tony Blair – “I have come to the conclusion that we have to build state institutions of real objectivity. Intense polarization leads to de-legitimization – that is the real threat. I believe in radical centralism – the alternative is very grim.”

Thomas Friedman – “Old binary politics of right and left don’t exist anymore. We are moving from binary to quantum politics, in which you are in multiple states simultaneously – we have to ask ourselves whether democracies can handle it.”

Friedman added – “Social media has created an ADHD society – compound by social networks and their evils.”

On the effects of Covid-19

Tony Blair - “Covid-19 has made clear that the challenge facing democracy is efficacy – in a fast changing world, how do you make systemic changes so government can keep up. The paradox is that at the very moment you need adaptive governments and politicians – you have a reversion to partisan politics.”

“Governments have almost decided debt doesn’t matter, because interest rates are low, but what happens if that changes? The real challenge afterwards – after coping with the covid-19 crisis, is will governments be able to cope with the aftermath. Is democracy up to the challenge?”

Blair added – “Who will survive the economic fallout of covid-19? The better educated, who are comfortable using technology. The people who are going to lose first are those in insecure jobs, people who are actually already living near the bread-line. Unless you get political leadership that can step forward and give people a real sense of hope for the future and optimism, then the pessimism people will have will drive them into the arms of what could be an even worse populism than we have experienced up to now.

Thomas Friedman – “The challenge with Covid-19 is you have to start looking at the world through natural systems – chemistry, biology and physics. Mother Nature will not reward the strongest or smartest – rather the most adaptive. All countries will have to form a sustainable strategy form maximizing lives and livelihoods – because whoever focuses only on saving the economy will pay with lives.”

Friedman added – “Right now there are three main strategies for dealing with the corona crisis - the Chinese model in which we have massive state surveillance systems – we find versions of this around the world including in Israel. The Swedish model which stayed partially open to try to create herd immunity. Finally, the American model – which is a fifty state mess.”

Yohanan Plesner, President of the Israel Democracy Institute – “The coronavirus hit Israel at a unique moment, during an endless election, with a Prime Minister under indictment. This revealed some of the weaknesses in our democratic system. We understand that we have to strengthen the Knesset’s oversight of the government as well as the independence of the judiciary.”

Prof. Yuval Shany, Vice President of Research at the Israel Democracy Institute – "Professor Ezrahi was one of the founders of the Israel Democracy Institute, and there is no better way to honor his memory than to hold this conference, especially in that it is focused on the future of democracy. We thank the Ezrahi family in particular, as well as our friends who continue to support us during what are difficult times for all.”

Prof. Karnit Flug, Vice President of Research at the Israel Democracy Institute – “The economic crisis has very severe implications for Israel's economy and just like is the case all over the world, the unemployment rate is sky rocketing. Although we finally have an elected government, it is still acting as if it is preparing for an upcoming election. It has made populistic decisions, while what are really needed are steps to provide the market with a sense of certainty. The Israeli government's overall economic packages in order of magnitude are similar to other countries, although a bit more modest, but some of its programs are less targeted. For example, the grant given to families with up to four children before the holidays was a waste of resources. Targeted tools are more efficient in dealing with a crisis.”