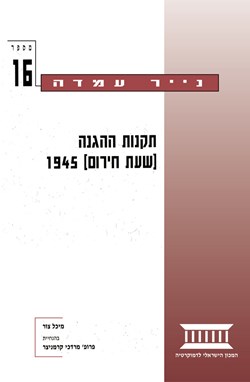 This policy paper discusses the (Emergency) Defense Regulations from the British Mandatory period, which have been part of Israel's book of laws since the founding of the State but are inconsistent with the values of human rights that are customary in Western democracies. The study points out problems with these regulations and proposes solutions and changes where possible.

The (Emergency) Defense Regulations, 1945 have been part of Israel's book of laws ever since the founding of the state. These regulations grant extraordinary powers of various types to the Executive Authority, and they strive to regulate the modus operandi of everything concerning the dictates of punishment that are incorporated in them. Clearly, when they were promulgated they were not intended, nor did they pretend to regulate governmental activities or guide the behavior of citizens during peacetime.

The name of these regulations indicates that they were meant to enable the state to defend itself and its citizens better during emergencies. The regulations do not demand as a condition of their implementation that a state of emergency exist. This fact might lead to two different conclusions. On the one hand, it is possible to infer that since the regulations are not dependent upon existence of a state of emergency, they were meant to be in effect at all times. On the other hand, and this is the more acceptable conclusion, it is possible to infer that such a requirement is not incorporated in them because they were promulgated during a time of emergency with the intent that they would be rescinded when the emergency was over. This second conclusion is supported by the fact that in England, birthplace of these regulations, they have been removed from the lawbooks or have been replaced by a different type of law.

When these regulations were effected, the Jewish population of Palestine reacted with fury and very determinedly. This reaction is understandable in light of the extreme impact on human rights issuing from them. The regulations contain no provisions for balancing security needs against human rights. They grant the regime nearly total, unaccountable discretion ( even though the position of the Supreme Court on this point was subsequently softened when it determined that any discretion is by its nature limited) and they have no critiquing mechanism against misuse of authority.

Less understandable is the situation after the state was founded when these regulations were left standing despite the regime's cognizance that they were inappropriate to a democracy.

In Israel, a declared state of emergency has been in effect ever since the founding of the state. Clearly, this declaration does not lack in importance, and it is also not possible to claim that the state of emergency is merely theoretical. On the other hand, the state of emergency that prevailed at the time of the founding of the state when the danger to its very existence hung over its head is not the current situation. It seems that while today, 50 years since the foundation of the state, peace and security are overall still not our lot, the State of Israel does have peace agreements with two of its neighbors and the peace process with the Palestinian people is in the works. The State of Israel has covered much ground in terms of the economy, science and culture. This would argue a strong foundation for the claim that regulations meant to improve the position of British rule and its ability to defend itself on the backdrop of World War II (and which may have been appropriate to the security and existential situation that prevailed in Israel in the early years of statehood) are no longer appropriate to the situation prevailing today. True, the danger of war with a neighbor still occasionally hovers, but the main threat today is terrorism.

As terrorism is an exceptional phenomenon because of its anti-societal aspect, it must be dealt with using exceptional tools, and legislation aimed specifically at dealing with the special problems arising from terrorism must be developed. It seems that the State of Israel has not yet become wise to development of such legislation but has preferred instead to depend mainly on these Mandatory regulations.

The Legislature has favored leaving these regulations on the books rather than deal with the legal problems that original legislation on the relevant security questions would stir up. The State of Israel has come a long way recently in matters that touch upon its legislative situation. Retaining Mandatory legislation like this, even though parts of it may still be needed by the State of Israel, creates legislative disharmony. There is nothing wrong with legislating special regulations on problematic and sensitive issues. Public deliberation and discussion may also contribute to the crystallization of public will and understanding of this kind of thing.

The new Basic Laws (Basic Law: Personal Dignity and Freedom; and Basic Law: Freedom of Endeavor) provide standards and instruments for dealing with some of the problems.

This position paper tries, on the one hand, to point out problems with these regulations, and to illuminate those issues for which the orders of the regulations are incompatible with the character of the state and with basic legal standards. On the other hand, where possible we attempt to offer solutions and changes worth implementing in order to fit the legal arrangements to the current legal and geo-political situation. The suggested changes, while aimed at the regulations themselves, may also be considered in some cases as independent solutions.