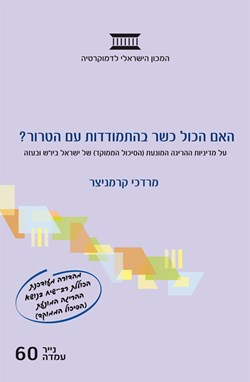 Are All Actions Acceptable in the Face of Terror?

The wave of terrorism of the second intifada required the Israeli government to take exceptional measures. One of them, which became a policy, is called “targeted killings.” Can international law provide clear criteria for applying the test of proportionality to such difficult questions as the security fence, targeted killings and extensive military operations? This policy paper investigates this question, and more.

A preventative (targeted) killing is the intended and precise assassination of an individual; in many cases of an activist who holds a command position in a military organization or is a political leader."Targeted killing" is a description intended to give a positive connotation to the term "assassination," which is intended to make the use of the term more acceptable. We have preferred to use the term "preventative killing" throughout this paper. Israel has been carrying out such actions in the occupied territories since November 2000, but it had done so outside of Israel prior to that time. Even though it would seem, intuitively, that the use of preventative killings, assassinations or eliminations is an immoral action, one cannot ignore the fact that in modern warfare, the method has certain advantages, some of which are indubitably moral. On the other hand, the implementation of preventative killing raises ethical and legal questions relating to the rights of the victims – specifically, the right to due process and the right to life. In this position paper, we have examined these questions both with regard to international and domestic law, as they arise both in times of peace and in war. We have focused on the implications of such questions for Israel’s war against terror in the occupied territories.

The first part of the paper deals with preventative killings in times of peace and draws a comparison between self-defense as practiced by an individual person on the one hand, and the use of preventative killing by law enforcement authorities – the police and the military – on the other. The author concludes that the use of lethal force must be considered only as a last resort, and in a much more serious fashion  than that with regard to personal self-defense (due to, inter alia, the fact that such actions are taken only by trained professionals). On the other hand, it could be argued that the requirement to restrain from using lethal force if it is possible to do so in a situation of self-defense must be less strictly applied with regard to preventative killings carried out by law-enforcement authorities than in cases of violence used in personal self-defense, since restraint carried out by law enforcement authorities could have relatively undesirable implications – such as a negative impact on the authorities’ deterrent abilities. However, the importance of restraint and moderation by law enforcement authorities cannot be understated, as the presence of these two traits will ultimately give rise to greater respect for the rule of law.

In general, the purpose of the use of lethal force is to prevent a person from attacking or escaping, not to kill him. At the same time, there are exceptional and extreme cases in which shooting to kill cannot be ruled out categorically, and such shooting with intent to kill may be permitted in the following critical circumstances: situations in which there is a danger to human life or of serious physical injury to a human being which is clear, immediate and virtually certain, and in which there is no other reasonable measure which can neutralise the danger (for example, when lethal force has to be used in order to rescue an abductee or a hostage whose life is in danger). The circumstances described above are the only ones in which the use of lethal force can be considered even where the state authorities have full effective control (i.e., in areas within the state’s borders or within occupied territories). A difficult question arises with regard to the use of such force in areas under partial control (in which effective control is not complete). In such areas, regular, non-lethal law enforcement measures are obviously preferable, so long as the use of such measures does not entail an unreasonable level of risk.

The second part of the paper deals with preventative killing in time of war. In this section, the author surveys the historical development of the use of this measure and indicates the various legal sources that prohibit its use. The author discusses two central principles of humanitarian law which constitute the central source of the prohibition of preventative killings: the principle of chivalry and the distinction between combatants and civilians.

The author concludes that preventative killing can be used only against those who are defined as combatants and who can be clearly identified as such, or against those who are defined as “civilians taking a direct part in hostilities” and then only in the limited fighting framework in which they are involved. Such a tactic may never be used in areas in which the state maintains full effective control. Similarly, it is not to be considered an appropriate measure to be used against those who are suspected of terrorist activity solely on the basis of intelligence information. Against this group, non-lethal law enforcement activities are to be used, either in territories in which the defending state has effective control or in areas where it can obtain such control given reasonable circumstances.

Within these restrictions, law enforcement authorities should be given a broad mandate for dealing with the following measures used by terrorists: organization, providing assistance of various types, financing its activities, incitement to commissioning acts of terrorism and the praising of and the identification with such acts. All such participants should be arrested and indicted. The ordnance infrastructure should also be targeted. Such law enforcement measures conform to the principle of humanitarian law regarding the prevention of unnecessary suffering; they do not constitute a verdict without trial, and they provide better protection for the basic human right to life and a fair trial. First, they force the authorities confronting terrorism to collect admissible and credible evidence against a suspect. They allow any suspect to bring evidence in order to refute the evidence against him, and they thus provide the suspect with due process. Second, such proceedings allow for the possibility of mistaken identity, or in errors regarding a suspect’s involvement in terrorist activity. Third, these procedures create a clear and sharp distinction between the actions of the terrorists and those of a state governed by law, and thus provide the state with a clear moral advantage. Fourthly, that  approach aids in the distinction between combatants and civilians who refrain from carrying out attacks on an illegal target such as an ordinary citizen who has not taken any direct part in hostilities.

Nevertheless, in recognition of the fact that the decision-makers will certainly lean towards giving extensive sanction for the use of preventative killings, the authors insist that care should be taken that this method is always considered as a last resort, and that clear procedures must be established for putting it into effect. These recommended procedures remove the substantive difficulty with regard to the use of preventative killings against those who are not “regular combatants” (those who do not make themselves completely available to a terrorist organization), but they do not remove the difficulty of the process (the lack of due process). Nevertheless, the use of these procedures is preferable to a failure to follow them.

In the third section, the writer examines the degree to which preventative killing is appropriate as a means of self-defense, both with respect to terrorist organizations and their infrastructures that are located in a foreign country which is disinterested in or is unable to prevent their activities, with respect to specific activists and cells belonging to such organizations. Every state has a right to defend its citizens against a danger, even if such defense involves a violation of another country’s sovereignty – or that of another authority – over territory in which the terrorist organization’s cells and emissaries are operating. Such a violation of sovereignty is justified when the state or authority that controls the territory does not enforce the law against the terrorists or does not prevent their activities. The only way to prevent states that are acting in self-defense from taking military measures against states who support terrorism is to develop close international cooperation in the struggle against terrorist organizations, in order to bring about by means of pressure on governments and other authorities to use law enforcement measures against the terrorist organizations that are active within their territories. When there is no such efficient international cooperation, military action against terrorism despite the accompanying infringement of sovereignty is clearly justified.

The author concludes that such self-defense measures conform with the doctrine of permissible self-defense when they are immediate, reasonable and measured. He contends that the requirement of immediacy be broadened with regard to terrorist threats. This would permit authorities to use measures that call for immediate implementation so as to prevent possible attacks at a later stage; in other words, when defensive measures are essential. He therefore proposes that it should be permissible to take action to repel various terrorist threats at an early stage – threats such as the accumulation of weapons of mass destruction or the carrying-out of a terrorist attack: for example, when a terrorist is equipped with a suicide bomber’s belt or starts out on the journey which will culminate in a terrorist attack.

The conclusions of the paper are that in order to prevent the collapse of the principles of humanitarian law, primarily the distinction between combatants and civilians – and in order to defend basic human rights such as the right to life and to a fair trial, it is necessary to encourage international cooperation and international pressure on terrorist organizations and the states that support them. This will lead to legal proceedings being brought against terrorists and the commanders of their organizations, wherever they may be located. For this purpose, it is vital to work to prevent the creation of sanctuaries for terrorist organizations that allow them to carry out their plans without interference. From Israel’s point of view, cooperation with such initiatives could help the nation in its struggle against terror and in obtaining international support for Israel’s operations. The establishment of an international regime against terrorism in general and against suicide bombers in particular, along with Israel refraining from taking illegal action against terror, could help Israel in obtaining support from the international community for those legal activities which it carries out in self-defense. In the absence of such an international regime, no state, nor individual or group acting on behalf of such a state, can be held to account if it deviates from the permissible in protecting its citizens and residents from terrorist attacks.

Tags:
Democracy in Defense,
IDF,
judicial issues,
terrorism and democracy,
The Amnon Lipkin-Shahak Program on National Security and the Law