The 23rd annual Eli Hurvitz Conference on Economy and Society (formerly the Caesarea Forum) featured a dynamic line-up of policy and decision makers, senior civil service officials, leading figures in academia, CEOs and chairpersons of industry, finance and hi-tech. Participants engaged in deep, quality discussions and delved into the most important related topics on the public agenda.

From May 24-25, speakers ranging from Governor of the Bank of Israel Karnit Flug, Ministry of Finance Director-General Shai Babad, Director-General of the Prime Minister's Office Eli Groner and Leader of the Opposition MK Issac Herzog to Startup Nation Central's CEO and Conference Chair Eugene Kandel and Justice Minister Ayelet Shaked gathered at a roundtable to discuss Israel's economic strategy, methods for adopting innovation and improving the effectiveness of the public sector, labor relations, the role of business press and the actuarial crisis.

The conference resulted in the establishment of a series of workgroups that will focus on the issues addressed over the two-day period with the goal of providing concrete, data-driven recommendations to the government. 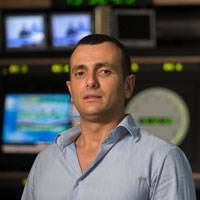 Long-term Vision: The Strategic Plan of the Ministry Of Finance
Ministry of Finance Director-General Shai Babad (pictured right) will present the Ministry's strategic plan, focused on reducing inequality and increasing productivity and growth. Department directors from the Ministry will share their expertise and following their presentations, each presenter will be asked to talk to their plans' goals and how they plan to implement them.

12:15-2:00 p.m. – Session Two
How to Make the Israeli Government More Effective
(Based on research by the Israel Democracy Institute)
"There is a direct correlation between the effectiveness of the government and the level of its economic development, so much so that it is theoretically unclear who leads who." This quote is found in the research report of Prof. Momi Dahan on the topic of government effectiveness. His research compares different criteria and indices which measure the effectiveness of the civil service and government and investigates their connection to government effectiveness. These criteria include: centralization of the government and its budget, professionalism of the public sector, and the connection between recruitment policies of workers and their salaries. The key findings of this research will be presented at the outset, allowing the conference participants to then engage in an open discussion on the subject, in order to draft policy recommendations on the subject. This discussion comes in the wake of a public discussion on how to appoint senior civil service officials, which could vastly affect the public sector.

Summary: Minister Shaked: 'When a Minister is Elected, He Has to Lay the Railroad Tracks, Not Just Drive the Engine'

The majority of countries in the world emphasize innovation as a central catalyst in their strategies to guarantee long-term economic growth. The ability of Israeli society to reinvent itself and lead innovative processes has been the bedrock of the development of its economy and society. However, the ability to advance innovation in the public sector has become increasingly challenging in recent years. This session will help to cultivate the necessary operational model for the government to foster and allow for innovation, support entrepreneurial expansion, deal with constraints, and encourage long-term strategic thinking in the civil service, while leveraging past experiences.

Session Summary: Innovation in the Public Sector: Dream or Reality?

Innovation in the Public Sector – Dream or Reality?
Led by Prof. Eugene Kandel

Bitcoin, 'Friendly Loans' and Everything in Between: How Have These Phenomena Contributed to Changes in the Israeli Finance System And Economy?
Led by Prof. Nathan Sussman, Director of Research Department and Member of Monetary Committee, Bank of Israel

6:30-6:45 p.m. - Does the Media Influence the Government of Vice Versa?
Led by Yaron Deckel, head of Galei Tzahal, the army radio station

7:15 p.m. – Dinner
An intimate conversation with Jerusalem Mayor Nir Barkat
Stand-up comedy routine on the Government and the Economy
Led by Lior Shlein, "On the Nation's Back," Channel 10

9:45-10:30 a.m. – Session Four
Don't Forget the Pensioners: Senior Employment and the Actuarial Crisis
This session will analyze the global need
as well as Israel's to increase the retirement age due to longer life expectancies, developments in the workforce for the elder population and their impact on employment. It will also deal with mechanisms that protect the weakest sectors ahead of this new retirement age and how to balance between these mechanisms and incentives to work into a more advanced age.

12:15-1:30 p.m. - Session Five
Labor Relations in Israel: What is the Desired Unionization Model?
As can be seen from comparing OECD countries, different models of unionized work directly impact important issues, including distribution of income, inequality, levels of productivity, and more. The session will deal with the desired Israeli model, considering the unique character of the economy and society in the State of Israel and in light of disruptive employment models.

Opening Lecture: What the Business Press Can and Should Be: Lessons from The Economist
Led by Ryan Avent, Senior Editor and Economics Columnist, The Economist

The Public, Businesspersons or the Government: To Who Does the Business Press Answer?
This session will explore how the business press functions in Israel. Is it independent? Are their interests transparent to the public? Who and what is considered "financial media?" How many economic media outlets can and should exist in the small media market?