Despite recent calls by right-of-center politicians that with the onset of President Donald Trump’s tenure Israel has entered a new era in its relationship with the United States and the country must exploit the opportunity to expand construction in Judea and Samaria, 50 percent of the Jewish public is sure or think it is unwise to expand construction.

This is according to the latest Peace Index, released today by the Israel Democracy Institute and Tel Aviv University.

If Israel annexes territories in Judea and Samaria/the West Bank, what political status should it give the Palestinian residents of those territories after the annexation? 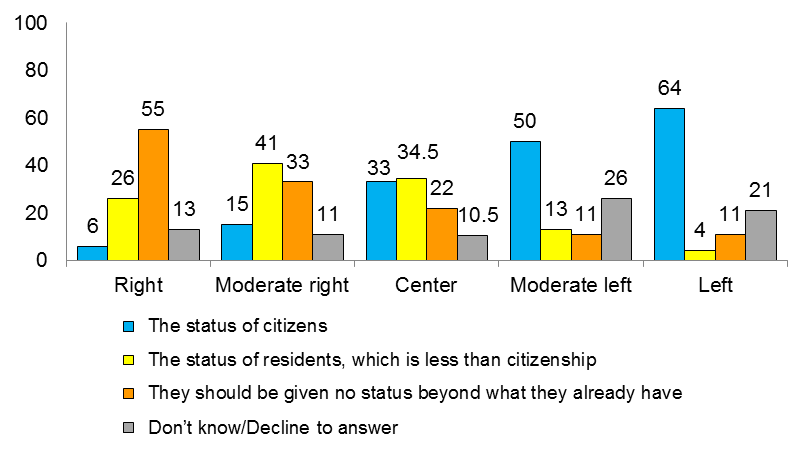 The Peace Index also looked aspects of the investigations of Prime Minister Benjamin Netanyahu, including trust in the police and in the attorney-general. In light of what has been revealed about conversations between Netanyahu and Yedioth Ahronoth publisher Arnon Mozes, the Peace Index looked at the public’s attitude toward Israeli media.

Trust in the Police & Attorney General
A series of questions examining trust in the police reveal that Jewish Israelis have trust in the police, while Arab citizens of Israel do not. For example, the Peace Index found that some 60 percent of the Jewish public believes that the police are conducting investigations of the prime minister’s affairs professionally and objectively. In contrast, only 30 percent of Arab Israelis believe the investigators are acting professionally and objectively.

Related: Research Reel - The Role of the Attorney General

It was also found that the majority of the Jewish and Arab public holds the view that if an indictment is served against Netanyahu, he should resign immediately, even though according to the letter of the law, he need not do so.

Trust in the Media
In the context of Mozes’ investigation and the relationship between his newspaper and the prime minister, we looked into the public’s degree of trust in the media. The survey findings show a deep distrust of the media by both Jewish and Arab Israelis.

The Peace Index is a project of the Evens Program for Mediation and Conflict Resolution at Tel Aviv University and the Guttman Center for Public Opinion and Policy Research of the Israel Democracy Institute. This month's survey was conducted by telephone and Internet from January 30 to February 1, 2017. The survey included 600 respondents (100 Arabs and 500 Jews), who constitute a representative national sample of the adult population aged 18 and over. The maximum measurement error for the entire sample is ±4.1% at a confidence level of 95%. View full questionnaire: http://www.peaceindex.org/english.

For more information and interviews: Maayan Hoffman, director of international communications, jaffemaayan@idi.org.il or 972-50-718-9742.