Monday, February 11, 2013, Israel Democracy Institute, 4 Pinsker St., Jerusalem - As the 19th Knesset begins to take shape, both new and returning Knesset Members can learn from the model set by exceptional lawmakers of the previous Knesset. The Israel Democracy Institute (IDI) confers its Outstanding Parliamentarian Award to honor those Knesset Members who have truly outstanding legislative records.

This year's award will be given to MKs Nitzan Horowitz (Meretz) and Orly Levy-Abekasis (Yisrael Beytenu). Both Knesset Members made serious efforts to promote issues that are often overlooked, including the rights of women, children, residents of the periphery, and immigrant rights as well as promoting environmental protection. 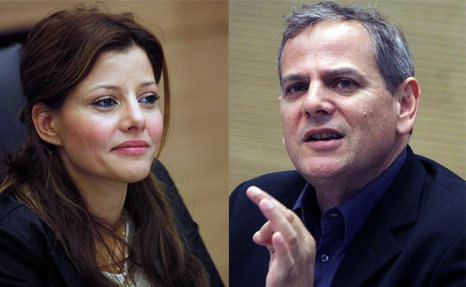 MKs Levy-Abekasis and Horowitz were selected on the basis of their outstanding parliamentary activity and contributions to the Israeli democratic process. MK Horowitz chaired the Committee on Foreign Workers and MK Levy-Abekasis chaired the Committee on the Rights of the Child. Both MKs were highly active in proposing multiple bills and in using their parliamentary roles to supervise and oversee the work of government ministries.

A formal invitation to the awards ceremony will be sent in the coming weeks.