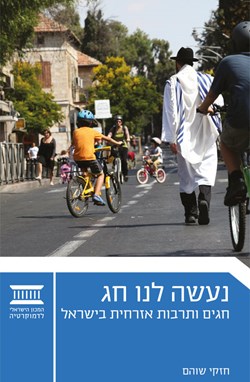 An analytical approach to the Jewishness of Israeli culture that presents a comparative discussion of the cultural history of the Jewish holidays and their significance to contemporary Israeli Jews, focusing on three test cases: Passover, Tu b’Shevat, and Yom Kippur.

This book proposes an analytical approach to the Jewishness of Israeli culture, examining the issue through comparative discussion of the cultural history of Jewish holidays and their significance to contemporary Israeli Jews. Three holidays serve as test cases: Passover, Tu b’Shevat (the "New Year of the Trees" on the 15th of Shevat), and Yom Kippur.

This publication was made possible by the generous support of the Goldhirsh Foundation.

Israeli culture is an eclectic product comprising various components and sources of inspiration, including Sabra Hebrew culture, the distinct religious traditions of a wide range of Jewish ethnic groups, Western capitalistic consumer and entertainment culture, New Age spirituality, and Arab-Muslim culture. One unique feature of Israeli culture is its Jewishness. Yet despite the increasing academic and public recognition that Israeli culture is replete with symbols, art, and cultural practices of a “Jewish” character, there is a palpable lack of analytical discussion regarding the significance of the vague entity known as “Israeli culture,” whose definition is subject to public debate.

This book proposes an analytical approach to the Jewishness of Israeli culture, examining the issue through comparative discussion of the cultural history of Jewish holidays and their significance to contemporary Israeli Jews. Three holidays serve as test cases: Passover, Tu b’Shevat (15 Shevat), and Yom Kippur.

Analytically speaking, the book is based on differentiation between restrictive and expansive definitions of culture, wherein the former constitute the arena of human activity effected through establishments and organizations dedicated to this purpose (theater, literature, the plastic arts, and the like). By contrast, according to the expansive definitions, all human activity, even the everyday variety, is considered “culture” because of its significance in defining personal and collective identity. Accordingly, I propose a tripartite definition of “Jewish culture”: culture (1) practiced by Jews that (2) relates explicitly to their Jewishness and (3) to other Jewish cultures.
As Israeli culture is fully compatible with this definition, it should be analyzed as one of the many independent Jewish cultures that have existed throughout Jewish history, such as Halakhic culture, mystical culture, and American Jewish culture, for example, with which Israeli Jewish culture maintains a constant process of conflict, reciprocal citation, exchange of materials, and cultural borrowing. There are Jewish cultures that are not Israeli, but there is no mainstream Israeli culture that is not Jewish—and even if there were, it would have little to no significance in discussion of the contrast between “Jew” and “Israeli.” Unlike previous studies, my research does not assess the Jewishness of Israeli culture according to its proximity to other Jewish cultures that may be popularly termed “Judaism.”

A distinct Zionist-Israeli stage, constituting the focus of this book, is evident in the history of every Jewish holiday. The three holidays selected for discussion represent three important aspects of public Jewish culture in Israel: One is a typical Industrial Age holiday that emphasizes consumerism and family values, the second a marginal holiday combining environmental awareness and nostalgia for childhood, nature and early agricultural Zionism, and the third, utterly atypical of the Industrial Age, calls for cessation of all economic activity and a radical alteration of public space.

Passover is typical of Industrial Age holidays worldwide, with its stress on family, children, consumer culture, and ethnicity. Like other holidays, Passover offers an opportunity for an annual gathering of the extended family (actually semi-annual, as Rosh Hashana constitutes a similar occasion), but in contrast to most industrial world holidays, which have distanced themselves from traditional rituals, on Passover, Israeli families persist in reading the Haggadah even if they lack the textual and ritual literacy required for “proper” recitation of the text and precise implementation of the ceremony. Such perseverance is apparently linked with Jewish ethnic-familial nationality, which considers all Jews to be one extended family comprising every individual Jew—a family that repeats the story of the collective’s origin even when the act of reading the story arouses ridicule or confusion among those present.

Tu b’Shevat is a different story. What was once a marginal and esoteric holiday in non-Zionist cultures, celebrated at most by kabbalistic sects and children, became a central holiday in the Zionist Era, expressing the patriotic values of nature and land thanks to the invention of tree-planting ceremonies that imported American Arbor Day into Jewish culture. Tu b’Shevat ultimately remains a holiday for children only, even though children’s culture has become a focus of overall public culture because of the hopes for national renaissance that were placed in the Hebrew educational system and because of the centrality of the educational system as an agent of socialization for Israeli Jewish culture to this day. The central role of Tu b’Shevat in Israeli public culture—despite its marginal influence on everyday routine—reveals the centrality of Zionist nostalgia in this culture.

Yom Kippur demonstrates the social pressure that Israeli society exerts on the population, including non-Jews, to obey rules whose violation is perceived as profanation of the sacred day. Public space thus becomes “Jewish” —a situation highly palpable also among the non-Jewish residents of this space, who are bidden to respect the holiday. Yom Kippur, whose observance in Israel is unparalleled not only among Industrial Age holidays but even among other Jewish holidays, demonstrates the uniqueness of Israeli culture and Jewish culture, whose mainstreams do not respond to the definitions imposed on them by the marginal religious and secular groups.

The initial assumptions and conclusions of my study thus diverge considerably from the single basic assumption that is so common in academic research on Israeli culture. Numerous studies emphasize the cultural and political rifts in this culture and describe it as a culture lacking a common denominator and whose breakup is only a matter of time or as one that is united solely by a common enemy. Certain researchers even believe that Israel is now part of the post-national era characteristic of the Western world, so that national ideology no longer possesses any social bonding power. In contrast to these claims, my book directs attention to everyday Israeli life, proving that Jewish nationalism—which is committed to the construction of a Jewish public space expressing the values of the Jewish majority society—is still alive and well as a cultural force and social cement, for better or worse.

In no way does this claim assume the existence of a uniform Israeli culture or attempt to ignore Israeli cultural heterogeneity. Rather, it claims that such heterogeneity is made possible by the existence of a common cultural entity, manifested in our time as ethnic Jewish nationalism. The persistent dominance of Jewish ethnic-familial nationalism has a price, however, as considered in the book’s last chapter, which proceeds from historical description to the question of “What can be done?,” inquiring how the Jewish holidays—and symbols and ceremonies in general—contribute to civil culture in Israel. In keeping with the findings of my study, I propose transforming popular Jewish culture into civil culture, along the lines of Thanksgiving in the United States, for example, which is celebrated wholeheartedly by immigrants of all ethnic origins in ways that reinforce their sense of identity with the surrounding society and their civil integration therein.

Can Jewish culture and the Israeli holidays that are a part of it function in a similar manner? The success of this measure—naturalization of Jewish culture—depends on the establishment of a common symbolic and cultural space for the Jews and Arabs who live in Israel. Such a measure must integrate Arab, Palestinian, and Muslim symbols into the Jewish-Hebrew-Israeli symbolic world. My book raises some initial thoughts about how this is to be accomplished. For example, it suggests maintaining a neutral cultural space by declaring Sunday a weekly day of rest. Another option calls for emphasizing the olive as the symbol of the state, as it constitutes both a Jewish-Israeli and an Arab-Palestinian symbol. One possible practical manifestation would be annual olive-harvest celebrations, conducted during the Hanukkah season, as a focus of attraction for internal tourism.

The Jewish culture prevailing in Israel is of a dynamic nature, displaying many different faces according to political, social, or cultural context, while continuing to paint public space in “Jewish” colors. Recognition of Jewish culture as civil culture will thus help reinforce integration among citizens in Israel, Jews and non-Jews alike.
The book was published under the auspices of IDI's Nation State research program, which was headed by Prof. Anita Shapira.

Dr. Hizky Shoham teaches in the Interdisciplinary Program for Hermeneutics and Cultural Studies at Bar-Ilan University and serves as a research fellow at the Shalom Hartman Institute in Jerusalem. He conducted this study as a researcher at the Israel Democracy Institute.

Shavuot Israel: A Celebration of Torah or First Fruit?  By Hizki Shoham