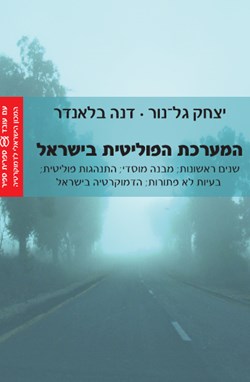 The Political System of Israel

The most comprehensive and up-to-date work on the government systems in Israel, spanning the development of Israel's political system from its inception in 1948 until 2011.

The Political System of Israel is the most comprehensive and up-to-date work on the government systems in Israel, spanning the development of Israel's political system from its inception in 1948 until 2011. This two volume set combines presentations of facts with analyses of political processes and their significance, and its authors, Prof. Yitzhak Galnoor and Dr. Dana Blander, do not hesitate to take a stand on controversial issues.

Topics covered in this two-volume Hebrew set include:

Establishing the State: The Supremacy of Politics

Prof. Itzhak Galnoor is Herbert Samuel Professor of Political Science (Emeritus) at the Hebrew University of Jerusalem and President of the Israeli Association of Political Science. He served as Israel's Civil Service Commissioner during the Rabin administration (1994–1996) and is currently the head of a multidisciplinary project entitled "State Responsibility and the Boundaries of Privatization" at the Van Leer Jerusalem Institute.

Prof. Galnoor's previous books in English include: Government Secrecy in Democracies; Can Planning Replace Politics? The Israeli Experience (with R. Bilski, D. Inbar, Y. Manor and G. Sheffer); Steering the Polity: Communication and Politics in Israel; No Laughing Matter: A Collection of Political Jokes (with Steven Lukes); The Partition of Palestine: Decision Crossroads in the Zionist Movement; and Public Management in Israel.

For additional information about this publication, contact Dr. Dana Blander at danabl@idi.org.il.