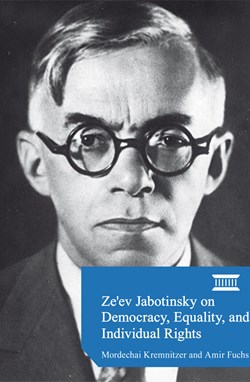 A booklet on the philosophy of Ze'ev Jabotinsky, a Jewish nationalist committed to national security and the Land of Israel who was also an avowed liberal democrat and staunch devotee of equality.

In Israel, substantive democracy, which includes the tenets of liberalism, has come to be seen as the province of the left. Consequently, it is often assumed that a nationalist hawk cannot be committed to human rights, equality, and the values of liberalism, and that a person who is committed to these principles cannot possibly be politically conservative.

In the first booklet in this series, Menachem Begin on Democracy and Constitutional Values, IDI Vice President of Research Prof. Mordechai Kremnitzer and Attorney Amir Fuchs drew on the speeches of former Prime Minister Menachem Begin to try and disprove a similar claim. This sequel continues this line of thinking by examining the writings of Ze'ev (Vladimir) Jabotinsky, who was Begin's spiritual mentor.

Jabotinsky was unquestionably a Jewish nationalist who was strongly committed to the security of the Jewish people and to the integrity of the Land of Israel. Few people remember, however, that Jabotinsky was also an avowed liberal democrat and a staunch devotee of equality. As can be seen from this booklet, his philosophy refutes the claim that democracy and liberalism belong to the left.