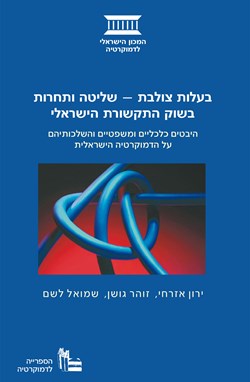 Cross Ownership-Control and Competition in the Israeli Media

Economic and Legal Aspects and Their Impact on the Israeli Democracy

In contemporary society, cross ownership in the media sector means, in fact, control over the main instrument used for representing reality to the wider public in the spheres ofpolitics, society, the economy and culture .A balanced and reliable representation of reality is, of course, a condition for the exercise of the individual's rightof independent judgment in matters related to his, or her, interests and to his status as a free citizenand consumer.

This is why decentralizing media control and ensuring competition among several media agencies is considered such a vital requirement for reliable communications. The current structure of the mass media in Israel is very vulnerable to abuse. The concentration of media control in just a few hands can only encourage media moguls to distort representations of economic facts in order to influence consumers' behavior . Moreover, to the extent that Israeli media magnates depend on government officials and on politicians with influence over legislation and regulation affecting the media industry, incentives are created for both sides to enter into covered transactions by which privileged economic advantages are granted to media owners in return for favorable media coverage and even direct financial contributions to politicians. Such practices which always sacrifice the public interest have flourished in Israel in recent decades and are only increasing over time. This situation is aggravated further by close unholy relations between capital and politics in other sectors.

Advertisers whether they sale products, services or politicians know that one of the most effective ways of promoting economic and political interests is to transmit commercialmessages in the guise of news, documentary and current events. If presentations of reality or pictures of products and political candidates do not appear clearly labeled as commercials the public is not usually aware of being subject to manipulation. It is easy to serve economic, political and other interests by merely slightly changing the balance of a report, its underlying narrative or tone. Commercial messages can also pose as innocent in cultural, art, science and sport programs. Therefore, even under conditions of a free competition in the media industry regulators still must function as guardians of the public interest. In Israel such regulation is particularly important given the absence of a truly competitive market and the skill with which monopolistic owners of the media and their government supporters use slogans such as "free market", "free competition", "open Skies", and above all "democracy" to conceal monopolistic practices.

Maintaining the media's proper functioning in a democratic society, therefore, requires constant vigilance both by state officials acting as regulators and by independent voluntary organizations, public regarding individuals, and academics who are able to expose to the public trends which endanger its interests and undermine democratic principles such asaccountability, decentralization of power, freedom of information and expression, competition and truth in advertising.

We have tried to distinguish in this book between competitive and uncompetitive media markets and between types of competition which promote the public good and those that have adverse effects on public values and interests. In addition we examine the principles that are responsive to both the public needs and the economic and technological conditions of an advanced media system.

Insofar as cross ownership in the commercial media is encouraged also by concentration of power and control in the Israeli capital market, we recommend the opening of the capital market to a wider competition allowing pension funds, for instance, to invest in the media sector. These and other measures recommended in this book are intended to ensure decentralization, competition, diversity and reliability in the Israeli media. Only such a communications system would be compatible with both a working democracy and an advanced economy.