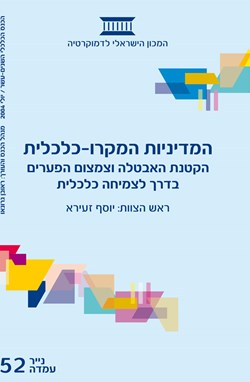 The impact of inequality on economic activity in Israel is grave. This policy paper presents possible solutions to slow the pace of economic expansion as well as the rise of unemployment.

State of the Economy and Employment

A turn for the better has taken place in economic activity since 2003, and Israel has begun to emerge from the slump into which it fell at the end of 2000. This shift began in mid-2003 and is even more evident in the data for 2004. The recession was caused by a number of factors, chiefly the global recession which affected exports; monetary restraint; and the collapse of the peace process, and waves of terrorism which have hurt both exports (tourism) and investments. The economy's emergence from the recession was accelerated by the end of the global recession, monetary expansion, and a reduction in the number of terror attacks.

At the same time, the unemployment rate has remained high for a number of reasons. First, employment lags in its response to the emergence from the slump. Second, there are still many foreign workers in Israel. Third, the emergence from the slump is biased by exports, and there has not yet been sufficient growth in local demand and especially investments. Increasing employment in the short run is therefore only possible by continuing to decrease the number of foreign workers and by
resuming the peace process. It is important to note that in order to minimize foreign employment, steps must be taken to equalize their conditions with those of Israeli workers, otherwise Israelis are subject to unfair competition.

Fiscal policy has recently been characterized by drastic cuts in transfer payments and reductions in taxes in the context of tax reforms. These measures are expected to reduce receipts by about 2% of the GNP, even after the broad effect of reduced taxes on activity is taken into consideration. The reduction in tax receipts will make it difficult to proceed with the fiscal consolidation process of reducing the deficit and the debt, which continued throughout the 1990s and only slowed during the recession. In 2003, the public debt reached the level of 107.4% of GNP. The following calculation describes the expectations for development in public deficit and debt (of the public sector) over the next two years, as a consequence of the changes in taxation (calculation assumptions: growth of 4% in 2004; growth of 0% in expenditures in 2004 and 1% in 2005; tax elasticity of 1.3 relative to the GNP; and implementation of half of the reforms in 2004 and the other half in 2005):

In view of this forecast, the team recommends that further tax reductions not be initiated in the near future. This recommendation becomes even more relevant in view of the constraints presented by the fiscal policy. An additional cut in transfer payments or in health and education services is liable to increase inequality even more. The other main budgetary considerations are security, which it is difficult to reduce at the moment, and interest, which can only be reduced if debt is reduced.

The inequality of economic income in Israel is very high (certainly relative to developed countries). The progressive tax system and the transfer system lead to a much lower level of inequality in disposable income (in 2002, inequality in economic income was 0.53, while inequality in disposable income was only 0.36, measured by the Gini co-efficient). Recent changes in taxes and transfers may increase inequality in disposable income. Inequality has a negative effect on the economy's growth in the long term because of the difficulty faced by those in the low-income bracket in providing their children with a proper education. Thus, it is worthwhile trying to figure out ways to minimize the large economic gaps in Israel. The best approach to reducing inequality is investing in human capital, i.e., education. But there are also other measures that may be of help: first, consideration should be given to introducing negative income taxation for people whose income falls below the tax threshold. Second, clearer distinctions should be drawn between
populations that can be placed within the employment market and populations that cannot. Third, the possibility should be examined of raising unemployment insurance; cutting it back has not decreased unemployment by much, but rather has reduced the ability of people to find appropriate work, i.e., impaired the efficiency of the search.