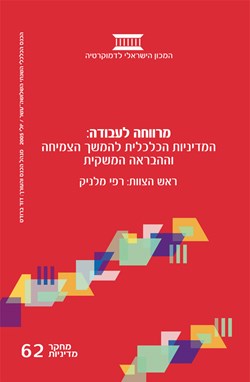 From Welfare to Work

During the years of the Second Intifada, the Israeli economy experienced a crisis of exceptional severity. In 2004, however, growth began and unemployment shrunk. This policy paper, prepared by an IDI research team for the 2005 Caesarea Economic Forum, proposes measures for continued economic growth and market recovery.

During the years of the Second Intifada, the Israeli economy experienced a crisis of exceptional severity. In 2004, however, growth began and unemployment shrunk. Naturally, economists began to ask which financial policies should be solidified in order to continue market growth and development. This policy paper, prepared by an IDI research team for the 2005 Caesarea Economic Forum, surveys the macroeconomic developments of 2004 and proposes measures for continued economic growth and market recovery.

The title of the report, "Economic Policy for Continued Growth and Market Recovery," reflects the emphasis that the research team placed on future trends. The report related to the main developments in 2004, and suggested guidelines for determining policy. The team also deliberated about using monetary policy in an era of price stability, and surveyed findings about the connection between economic growth in Israel and the development of poverty. The team concluded with recommendations for economic policy.

The macroeconomic developments in 2004 were positive. After a lengthy crisis, the likes of which had never before been recorded in the economic history of Israel, a positive turning point occurred in the commercial turnover of the market, and the GDP rose at a rate of more than 4%. This occurred against a background of very low inflation rates, stability in the financial markets and the currency exchange rate, a surplus in the current account for the balance of payments, and a decrease in the unemployment rate. The team noted that, at this stage, it is not clear if the positive macroeconomic developments had left their mark on Israel's social problems, and if there had been an improvement in the areas of poverty and inequality, which had worsened during the years of crisis, between 2001 and 2003.

Reasons for the Turnaround

The most prominent economic developments in 2004 and 2005 were the growth of the GDP and commercial production. The team leader noted that the prevailing opinion concerning the growth among forecasters is similar, and positive. In addition, data that was mentioned points to a sharp decline in the rate of unemployment, to a low pace of inflation, below the government's goal, and to stability in the rate of the shekel. The team believes that the surplus in the current account for balance of payments, against a background of deficits that are not problematic, is an excellent development that stabilizes conditions for continued growth.

The necessary condition for rescuing the market from its chronic march towards the brink of economic crisis and for exploiting its growth potential, is the decrease in the ratio of the public debt to the GDP. In this context, the team's leader suggested adopting the "Swedish model."
It is not possible to adjust the size of the debt in the short term. It is therefore important to set a long term goal and, when achieved, to maintain the range of expenditures and reliable, trackable taxation. Maintaining this range will increase the levels of freedom by the government in implementing an anti-cyclical economic policy in the short term as well.

The team asserted that decreasing the ratio of the public debt will aid in decreasing the burden of interest payments, will release budgetary resources for alternative uses (security, social goals, investments, etc.) and will reduce the involvement of the government in the capital market, while at the same time freeing up sources of savings for the commercial sector and decreasing the risk attributed to the Israeli market. The decrease in the proportion of the public debt will encourage investment in the market and improve the credit rating, and thus decrease financing costs for the public and private sectors.

In order to continue to maintain the continuous growth led by the expansion of the business sector, it is vital to continue a fiscal policy that proceeds by decreasing the proportion of public expenditures relative to the GDP.

To attain these goals, it was suggested that a ceiling, as a percentage of the GDP, be set for the governmental deficit. Maintaining a low deficit will reduce the exposure of the market to external and internal shocks and will decrease economic uncertainty. As a result, an improvement will occur in the functioning of the market and in the allocation of resources, and the investments and rate of growth will increase.

It is desirable to decrease the tax rate, over time, at a rate that will ensure no deviation from the goals of the deficit and will increase market competition.

The central goal of the monetary policy is to maintain an environment of price stability. The monetary policy must take into consideration the cyclical situation (gap in production, rate of unemployment and other indicators) in order to support economic activity without jeopardizing the inflationary goal. The credibility of the monetary policy must be improved and stabilized as a guarantee for maintaining price stability over time. To do so, the complete independence of the central bank must be safeguarded in its use of policy tools to implement the monetary policy through a stable rule of operation that will be well understood in the markets; to maintain transparency; and to regularly publish the assumptions and considerations on which monetary decisions are based.

In the world environment in which the Israeli market operates, with free capital movement and developed financial markets, the monetary policy must operate according to the dictates of market discipline. An incorrect reaction, or lack of reaction, may be reflected immediately by a market reaction which may harm the financial stability and real operations.
The monetary policy must operate within the limitations dictated by considerations of financial stability. In a world of free capital movement, changes in the real interest rates between Israel and the world may create unstable capital movement and sharp changes in the exchange rate.

The team warned against major changes in interest done in order to prevent too large a shock to the financial markets which could harm real operations.

The macro team asserted that economic growth is a necessary condition for facing the social problems of the market, and only a process of growth can allow for an increase in wages, employment, and resources directed towards resolving these issues.

According to the experience of the past 15 years, growth in and of itself – without an additional policy – will not necessarily be sufficient for a substantial improvement in the status of the weaker segments of society. Thus tools must be designed for directly confronting social problems.

The required steps basically involve changing the order of priorities of government expenditure and decreasing taxes without disturbing the desired macroeconomic framework. The policy of decreasing direct support for the unemployed working-age population and increasing the incentives to join the work force must be maintained. It is important to increase direct support for populations that cannot join the work force, mainly the elderly and handicapped. Preference should be given to expenditures on education and to implementing reforms in the educational system which will make the use of the resources allotted to this sphere more efficient.

The effectiveness of government policy in the area of assistance to weaker segments suffers from a lack of information about income and a limited ability to distinguish between those who cannot work and those who do not want to work. The team members think that tools should be developed in order to examine total income and assets as a basis for a governmental assistance policy.

The Monetary Field: Monetary Policy in an Era of Price Stability

The team stated that a system for developing an inflationary goal in Israel is consistent with the norm in developed countries, and enjoys a reliability that allows for attaining the goal through interest policy. The team's recommendation is to maintain the present framework, a stability goal of 1-3 percent, and a floating exchange rate. It is understood that the monetary policy must maintain an environment of price stability and financial stability. The degree of flexibility in the monetary policy depends on bridges or on transmission mechanisms between the policy prices and activity; it is thus dynamic and subject to change. The model that the team used showed signs of a weakening connection between the exchange rate and prices in the short run. These signs support the granting of greater weight to the reduction in the deviations in the GDP, compared to what was considered correct in the past.

The Relationship between Growth and the Development of Poverty in Israel

Finance Minister Benjamin Netanyahu emphasized the fact that where there is growth, it stems from competition, and competition is an additional element for breaking out of poverty not only by an increase in the ability to earn but by an increase in what the salary can buy.

Further on in the survey, the macro team noted that growth in the past 15 years contributed to an improvement in the economic situation of the weaker sectors, mainly through an increase in allocations. On the other hand, it was found that during these years, the amount of influence of the growth on employment and on wages in the weaker sectors was small. The element of growth and the significant increase in the number of foreign workers are among the main factors for this.

The team estimated that, despite the fact that growth is expected to contribute to reducing unemployment, past experience shows that this will not help most of the households which are below the poverty line and do not include unemployed people. Since wages at the low end of the economic scale were not sensitive to growth, and the mechanisms for an automatic increase of support in these sectors during times of growth had been cancelled, there is no certainty that growth alone will aid these weaker sectors. At the same time, an active policy for helping the weaker sectors must be put into effect, especially for those households with working members.

There are two anchors for fiscal policy: the first one is government expenditure and the second is a low budgetary deficit.

The fiscal rule of action will only be updated following sharp changes in geo-political conditions, a deterioration to war, or a situation which will require a one-time, relatively large expenditure.

A goal, agreed upon by a government decision, should be set as being the weight of the desired public debt relative to the GDP (fiscal consolidation) and should be acted upon in a steady and reliable manner so it will be achieved.

Recommendations for a policy of support for the weaker sectors are as follows:

Additional decisions supporting participation in the work force are: