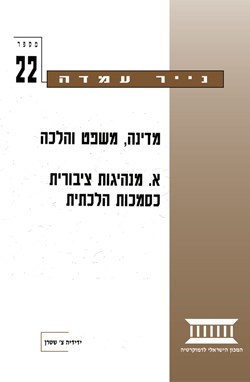 State, Law, and Halakhah (Part One)

Chapter Two: The Argument
1. Torah Law and Government Law as Complementary Tracks
2. The Aim
3. The Technique

Chapter Three: Describing the Phenomenon
1. Between Fact and Norm
2. On Institutional Duality in Halakha
3. King and Elders: The Biblical Era
4. Nasi and Exilarch: The Era of the Mishna and the Talmud
5. The Exilarch: The Gaonic Era
6. Community Organs: The Era of the Early and Later Authorities

Throughout history, the Jewish People have been led by two establishments, one religious and one civil. Each had normative aspirations of its own and functioned, in a variety of meanings and contexts, as a legislative and/or judicial authority. Given that Jews enjoyed considerable judicial autonomy even in exile, the religious and civil leaderships were invariably involved in negotiations - at times cooperative and at times confrontational - over the scope and the content of their respective contributions to the existence of the Jewish community at the legal-normative level. In this position paper, I will map out the relationships between the religious and civil legal systems that were active in Jewish society in the course of history. The meaning of this endeavor can be translated into various terms:

In political science terms, I will ask what was the real status of non-religious sources of authority that legislated rules of behavior for Jews in the course of history and applied them through judicial systems. Does the practice of Jewish life indicate that civil sovereignty lacking a religious basis was denied legitimacy?

In legal terms, I will examine the technique that led to the creation of a system of Jewish law. Did Halakha rely exclusively on norms created by an establishment whose declared source of authority was anchored in religion, or did it internalize norms originating in non-religious institutions? Did Halakha grant any legal halakhic significance to the judgements of external, non-religious institutions?

In religious terms, the discussion will allude to the possibility of granting religious significance to civil sovereignty. A question will then arise: is Halakha solely a divine creation applied through religious mediators, or does it also have a rational, moral, and purposeful aspect, which is essentially human, originating in human creativity and consciousness?

In cultural terms, I will deal with the ability of a system of behavioral rules—Halakha—to react to a changing reality although, on the surface, the central halakhic ethos is fundamentally conservative, religious-spiritual in its essence and ostensibly upholds the eternity and uniqueness of its source. Is Halakha a pure, closed autarchic system, shaping itself from within? Is Halakha the product of the sages' inner discourse, or does it convey an ongoing, intergenerational dialogue where individuals, organizations, and communities function in various contexts of meaning? If Halakha is a product of intercultural discourse, how does a given culture, with its changing tastes, ways, and values, percolate into a lifestyle dictated by a Torah given at Sinai, with the law described in minute detail?

A factual-historical description may contribute to the discussion on the conflict between law and Halakha in every one of these realms. This description will provide a wider context of meaning to the discussion presently being conducted in the Israeli media, educational systems, and political arena concerning the relationship between Torah law and state law.

Tags:
secular and religious Law,
The Rabbinate,
religion and state,
Religion and State