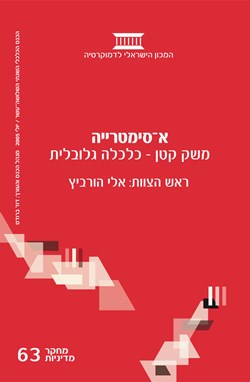 Although Israeli's economy is impressive by Western standards, the growth rate of Israel's economy is lower than that of most developed countries in the world. What are the origins of this situation and how can we bring about a steady rate of economic growth? This policy paper points to economic gaps as the greatest obstacle to economic growth in Israel and calls for the adoption of progressive policies in this area.

Although Israeli's economy is impressive by Western standards, the growth rate of Israel's economy is lower than that of most developed countries in the world. What are the origins of this situation and how can we bring about a steady rate of economic growth? Written for the 13th Caesarea Economic Policy Planning Forum in 2005, this policy paper is the result of research by a team headed by Eli Hurvitz, Chairman of the Board of Teva and of IDI. It concludes that economic gaps are the greatest obstacle to economic growth in Israel and calls for additional research and development and the adoption of progressive policies in this area.

The discussion on "Small Market – Global Economy" addressed the obstacles which the development of the Israeli economy faces, including the unbalanced growth of various sectors of the economy, the minimal participation of weaker sectors of the population in the labor force and in the accumulation of human capital, and the decline in Israeli research and development.

From the data, it is evident that while economic growth in Israel is present in high-tech, it is virtually non-existent in other industrial sectors. The fact that this growth is based on human capital increases the gaps between the weaker groups and other sectors of the population. This results in less economic growth while significant existing abilities are not utilized. Moreover, the population sectors that are economically weaker are also younger and exhibit faster demographic growth. These demographic dynamics magnify the threat to the ability of the economy to grow in the future.

Basing the economy on constantly developing advanced technology places the economy in a continual technological race. While superior technological advances in Israel will enable Israel to maintain and even improve its position in the world economy, a decline in development would enable others to surpass Israel in technology. Consequently, a decline in economic status is potentially close. A decline in the scope of scientific research and development that is the basis of high-tech will lower Israel's relative status in the competition on technological innovations.

Generating Growth in the Entire Economy

Israeli experience, and global experience in general, has shown that the high-tech industry is unable to sustain economic growth on its own. Without growth in other industries, the gaps that hold back the growth process will widen and eventually put a stop to economic growth, or lead to a considerable decline. Stable growth over time is possible only if there is simultaneous growth of a majority of the industries in the economy.
With this we learn from world experience that the high-tech industry can prompt other industries and lead them towards growth by applying the innovations that it offers. This can give other industries in the economy the opportunity to increase their production, thus promoting stable and continuous growth.

From new research it transpires that the economic growth in the United States in 1995 to 2000 was not only based on the data and communications industry, but mainly on the growth of other industries whose investment rate in the application of these technologies was high, and due to this they gained growth in productivity. Industries that underwent a substantial rise in productivity were those concerned with retail and wholesale (such as Wal-Mart) and financial intermediation (even before the Internet revolution and in an increased manner thereafter). In Israel, too, there are industries that have succeeded to apply information technology in such a way as to promote their productivity quickly, for example: communications services, pharmaceutics, advanced chemistry, and biotechnological research.

In order to ensure productivity, substantial investment alone is insufficient. It is necessary to know how to utilize technology to its fullest. For this purpose, it is usually necessary to reorganize the production process or the mode of service in order to utilize new technologies to their utmost potential. Reorganization of production processes necessitates process innovation and this in itself promotes product development therefore creating positive external effects: the knowledge acquired by companies investing in new methods may be applied in other similar companies.

What is Required in Order to Promote Growth that is Supported by the Implementation of Information and Communication Technologies in Israel?

All these require the support of research and development in Israel. The information and communications industry in Israel is strong, innovative, and supported by wide-ranging research and development which is based on a high level of human capital that creates a convenient basis for applying these processes. In spite of this, for various reasons, these processes are not carried out:

Steps must be taken to encourage high levels of participation in the workforce and to increase the weaker sectors' ability to earn a living in Israel. The following are recommended changes:

Globalization and Research and Development

The development of technological infrastructures in particular, and the culmination of technological knowledge, by those dealing with research and development in general, is carried out mainly in research universities. Following severe budget cuts in recent years, the extent of academic research has lessened and a significant decline in its ability to maintain its status in the world is already evident.

In regards to the local economy, direct and indirect products of academic scientific research generally form the foundation for applied research and the achievement of a competitive industrial advantage. As a result, the effect of academic research on the economy is only substantial over time. Consequently, at any given time, it is possible to reduce the extent and quality of research without any immediate influence on the industrial state; the negative influence of the decline will only later manifest itself in the growth rate of the economy.

Thus, decreasing the extent and quality of scientific research at the present time will cause a decline in the Israeli economic standard in the future; over time its capacity for economical growth will be impaired. This problem must be regarded seriously.

There is no economic model that ensures a high scientific level in Israel over time: government participation in research and development has been significantly reduced, and no alternative sources of funding have been found. The scientific standard which is extremely important for Israel's future economic success, suffers constant weakening. This problem is particularly severe in light of threatening competition from developing countries that the Israeli economy must contend with. In order to maintain Israel's technological status, it is therefore important to strengthen the infrastructure of science and technology which is found and created mostly in research universities.

What Research and Development Policy is Required in Israel?

The Importance of Higher Education in Israel

In order to maintain Israel's technological status, the infrastructure of science and technology currently carried out in the research universities must be strengthened. Today, after extensive budget cuts in research at universities, financial support systems that aim towards ensuring Israel's position in the forefront of world research in a variety of fields must be reconsidered.

Among other factors, significantly increasing government subsidized research is necessary, along with moderating the salaries of those involved in the field and in tuition.