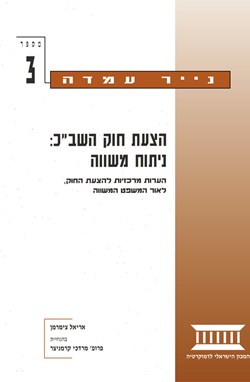 This policy paper offers a critical analysis of the General Security Services Bill in light of the importance of the activities of the GSS. It considers the role and purpose of the GSS, ministerial responsibility, special interrogation powers, oversight of orders, and the GSS comptroller.

The following summary offers a number of examples and a partial analysis of certain provisions of the law, which have been described in full and accorded a comprehensive analysis in the full position paper.

This document examines a few problematic sections in the current proposed law and describes how a number of Western countries have dealt with the same issues: the United States, Germany, England, Australia, and Canada. The laws of the three last countries listed are the most interesting, for two reasons. Firstly, the legislators in these countries based their laws on the cumulative experience regarding legislation for the security services. Secondly, the proposed Israeli law draws heavily upon the British model, and exactly replicates it in a number of points. But of all such laws, the British one has come under severe criticism for not achieving an appropriate balance between the need for secrecy in security matters, and individual rights. This paper does not offer a comprehensive critique of the proposed law; rather, it presents the solutions offered by foreign laws for the main dilemmas at the heart of this law.

2. The key problems in the proposed secret services law, after comparison with foreign laws, are:

A. Article 4 - Ministerial responsibility for the security services provides that:

The McDonald Commission in Canada identified one of the difficulties in the operation of the security services: systematic attempts on the part of members of the services to mislead and conceal information from those who are politically responsible for them, by failing to include the minister in day-to-day reports, while the minister and his staff actually prefer not to be privy to what is going on in the service. This practice is what led to licentiousness in the service and the minister can deny any knowledge of what is being done. This finding identified the need to establish a dual mechanism to ensure that the minister knows what is going on in the services, and that he is legally responsible for all of its actions. One solution lies in the definition of the services' structure; another is to establish an oversight system.

The McDonald Commission identified another serious problem in this context, which is certainly relevant in the case of Israel: when there is a change of guard in the government, the responsible minister is not yet familiar with the security services, and may tend at first not to intervene. It turns out that this period can last quite a long time. The solution is to appoint a permanent and apolitical official in the office of the minister, to be directly responsible for the security services, maintain direct contact with the head of the service, and know what is being done there.

B. Article 7 - The legal mandate: the objectives of the service and its function, provides that:

For these purposes the service shall perform the following tasks in Israel and abroad:

... (f) Other activities which the government has determined, which are designed to promote the vital interests of the State. Global experience teaches us that security services have a natural tendency to expand the range of their activities to include areas they ought not to engage in. The role of the law, as it is understood in other countries, is to regulate the activities of the security services and to limit their actions and their powers. Two methods of achieving this goal are: setting forth a clear mandate in the law, andproviding a meaningful oversight system. Nonspecific definitions like the one in the example above taken from the proposed law, regarding the appointed task and the function of the service, undermine this end. No other country has a residuary clause like the one contained in Article 7(f).

Even in England, where the law was sharply criticized on account of the opacity of its definitions, the provision did not reach the same level of ambiguity as the proposed Israeli law.

Warrants are necessary when human rights stand to be infringed: an invasion of property, wiretapping, or other infringement of privacy. We can identify a number of criteria for issuing a warrant which will ensure that the infringement be kept to a minimum: the legality of the decision (including probable cause), proportionality, the lack of alternatives, and the existence of adequate oversight of the granting of warrants and their execution.

Practically speaking, granting the power of issuing warrants to the Prime Minister (as in the proposed law) provides a very partial answer to the above criteria since it is unlikely that the prime minister would have the professional skills required nor does he have enough free time to examine the facts thoroughly. In general, the body which authorizes the issuance of warrants in other countries is a minister, sometimes in conjunction with a judge. It is desirable that the body which oversees the granting of warrants include a team of professionals who are capable of weighing in a meaningful manner the necessity for and scope of the warrant.

The most important mechanism for the success of the law is the oversight of the service. But the proposed law might make this a passive element! The supervisory provisions in other Western countries create a mechanism for active oversight. They involve supervisory bodies which examine internal regulations, practices and policies, the decision-making process, warrants and the manner in which they are executed.

There is no corresponding provision in any of the foreign laws examined. There can be no justification for such an exemption, which oversteps the bounds of general law.