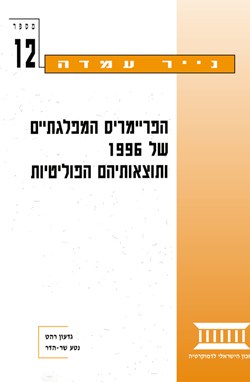 This position paper examines whether the goals that justified the adoption of primary elections within Israel's political parties were indeed achieved. This issue was examined by analyzing the influence of the method of primaries in the Labor, Likud, and Meretz parties prior to the 1996 general elections on the behavior of the main players in the primaries: the parties, the candidates, and party members with voting rights.

This position paper looks at whether the goals, which served to justify adoption of primary elections, were indeed achieved. Critical examination of the party primaries shows that even if including the public in party politics is desirable from a normative standpoint, great importance is attached to the way the primaries are carried out. This issue was examined by analyzing the influence of formal principles and the method of primary elections in the Labor, Likud and Meretz parties prior to the 1996 general elections upon the behavior of the main players in the primaries: the parties, the candidates and the party members with voting rights. Results of the primaries were considered from four aspects: participation, competitiveness, responsiveness and representativeness. The research was based on primary sources such as: party materials (rules, election results), candidate publicity (announcements, manifests), the press (dailies and local papers), and on fieldwork that included interviews with the candidates and observations made at the polls and at party conventions. According to the research findings, the expectations of those who favored including rank-and-file party members in choosing their Knesset candidates were disappointed.

The ease with which the right to participate in the primaries was granted in conjunction with the tremendous push for mass enrollment brought about expansion of the circle of participants in party politics. But this expansion yielded rotten fruit: the cooping of members who were not party supporters; mass defection from the parties after the primaries; membership in multiple parties. Granting the same rights to enrollees who signed up solely for the primaries and who often do not even vote for the party as those of party stalwarts creates fierce problems for party operations. While the numbers of party members has swelled, their quality is questionable, as a not insignificant number of them do not vote for the very parties they have joined.

A direct election within the framework of large voting blocs has augmented the need for mechanisms to assure representation of segments of society (women, minorities, immigrants, etc.) and of the periphery. The increased use of these mechanisms is detrimental to the image of those whose representation is assured and perpetuates that very competitive inferiority that the mechanisms were set up to combat in the first place. Nonethless, the critical need for mechanisms to correct representativeness stood out when, except for the representation of women in the Meretz party, social groups and geographical regions were promised places in the party lists because of these mechanisms. In the Likud, the subordinate nature of considerations of representativeness as against electoral considerations with regard to the election of the prime minister were revealed when these mechanisms lost their relevancy as Likud joined a triangular alliance with Tzomet and Gesher.

The old patterns of responsiveness were maintained in part when at least some of the same cliques that had wielded power in the party central committees organized large blocs of voters.

In addition, new patterns developed such as the "direct" appeal to the voters, through the media with all its influence on the behavior of Knesset Members, and the appeal to thewell-heeled and to interested parties, with its concomitant price. It seems that only Meretz succeeded in maintaining a measure of party obligation of its Knesset representatives when it decreed that the initial round of screening of candidates be carried out by the institutions of its constituent parties and established strict rules for financing. Although it seems that even with primaries there is no electoral reward for breaking party discipline, there are still problems with the quality of the legislation and the considerations underlying it that are affected by the sharply competitive framework.

Despite the "opening" of competition for places on the party lists, the standing candidates enjoy a great advantage stemming from the powerful political, economic and communications resources at their disposal. In the three contests that were surveyed, there was very little competition even where a concerted effort was made to level the field. "Revitalization" of the party lists came about chiefly due to the mechanisms for correcting representativeness, especially in the periphery. Most of those among the new candidates who managed to get elected are not a new genre but were cut from the familiar and accepted Israeli political mold - former army people and heads of powerful organizations.

The single foundation of unimpeachable importance is the democratic ritual, largely symbolic,of extensive participation. In any case, the price paid in terms of representativeness, responsiveness and competitiveness and the price of expanding the participation yielded no electoral dividends. In the 1996 elections, the myth regarding the link between opening the method of internal elections and success of the party in general elections was exploded.

This myth had been based on the synchrony between the 1997 adoption of the system of "sevens" and the Likud's rise to power, and the 1992 adoption of primaries and the victory of the Labor. Parties that involved their members in choosing the list of candidates were not successful in the 1996 general elections: Knesset representation of the Likud, together with Tzomet, and of Labor and Meretz was hurt while parties that picked their candidates through party institutions or by appointment had much greater success. It's hard today to argue that there is a positive link between opening up a party and its achievements in general elections. Moreover, there are those who argue that the sharp internal party struggle elicited by primaries has even affected the functioning of the large parties in the elections themselves.

The position paper sums it up with the following argument: "Execution of proceedings that seemed more democratic was more destructive than helpful. One should not conclude, as is often done in public discourse on this topic, that return to the "smoke-filled rooms" of the steering committee or even to the powerful central committees or bureaucracies is desirable.The requisite fix includes balance, in which some of the values encompassed by the idea of including rank-and-file members in the life and central decisions of the party could be better incorporated and executed."

These days it seems that the era of "primaries" has passed. Parties dare to change theirminds and return the choosing of candidates to the party institutions. According to theanalysis, abandoning the primary system is not regrettable. Yet, the authors of this position paper believe that there is room for effecting the values in whose name the primary system was adopted. They consider Meretz's primary system, in which the screening of candidates was carried out by institutions of the parties that make up Meretz, to be a preferable system even though it also suffered from not a few drawbacks. A comprehensive study on the topic of choosing candidates in 1996, soon to be published, will include a recommendation on how to achieve these values in a way that bridges personal and party politics.