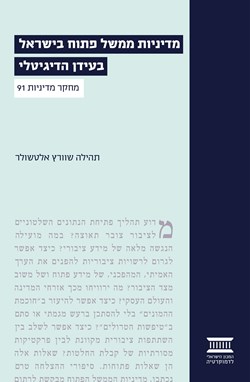 Open Government Policy in Israel in the Digital Age

A policy paper by Dr. Tehilla Shwartz Altshuler, which proposes a model for the successful implementation of Open Government Policy in Israel in the digital age. This book highlights the principles of transparency and accessibility of government information, public participation in decision-making, and standardizing data interfaces in order to foster cooperation among governmental bodies.

Why is making government data accessible to the public gathering momentum?  How beneficial is such accessibility? How will the accessibility of information benefit the citizens of Israel and its business community? How can we get feedback from the public and make use of the "wisdom of the crowd" without having to contend with biased agendas or empty chatter? How can we integrate online public participation with traditional decision-making methods?

Open government policy seeks to harness new technologies to improve communication between citizens and government and to derive the maximum social and economic benefit from the information that is at the government's disposal. The notion that the public has a right to criticize the government and to participate in decision-making dates back to the Enlightenment and is accepted by all contemporary democracies. But the concept of "open government"— which asserts that citizens should have access to all government documents and procedures—is a development of the digital age. Access, however, is not enough; data must also be interpreted and turned into a useful resource.

In this policy paper, Dr. Tehilla Shwartz Altshuler, who heads IDI's Media Reform project, proposes a model for the successful implementation of Open Government Policy in Israel in the digital age, and highlights three principles vital to attaining this goal: transparency and accessibility of government information, public participation in decision-making, and cooperation among governmental offices and departments through standardizing data interfaces.

Open Government Policy—as it has developed throughout the Western world in recent years—aims to harness new technologies to improve communication between the government and its citizens. It also aims to correctly utilize and exploit the information that is at the disposal of the government, in order to bring about social and economic benefits. This policy paper proposes a model for the successful implementation of Open Government Policy in Israel.

In advancing the principles of transparency, making information accessible to the public, and public participation, the primary advantage of the digital age is an ability to supervise the actions of government. Another advantage is that an increased level of accessibility to data in different fields leads to public and economic benefits and encourages development and initiatives. In addition, it goes without saying that public participation is an excellent tool for actualizing the concept of the "wisdom of the crowd" (the collective perception of a group of people, who are not necessarily experts).

The Open Government Policy recommended here is based on three complementary principles:

The policy paper relates in depth to each aspect of improving government transparency and public participation. It discusses concrete issues that relate to these aspects, such as:

In implementing the principles of Open Government, this research emphasizes the importance of cooperation between three independent circles that will support the process:

The recommendations in this policy paper aim to promote a government that is committed to providing open, accessible information for all, and that facilitates public involvement and participation in government processes.