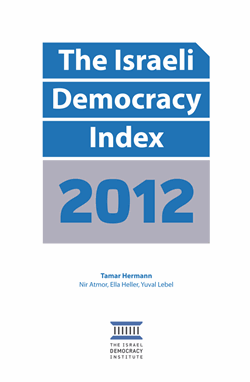 Released on September 6, 2012, the 2012 Israeli Democracy Index provides insight into the Israeli public's attitude towards the future of Israel, their assessment of the performance of their elected officials and political parties, their ability to impact government policy, and their perceptions of whether Israel's Arabs are victims of discrimination.

First published in 2003, the Israeli Democracy Index provides critical insights regarding the public's opinion of the preferred form of government, the functioning of the political system, the behavior and performance of elected officials, and key democratic values. The annual report is based on a poll of a representative sample of all sectors of Israeli society. The 2012 data were collected by Tel Aviv University's B.I. and Lucille Cohen Institute for Public Opinion Research from mid-April to mid-May 2012, based on a representative random nationwide sample of 1,025 respondents aged 18 and older.

The 2012 Israeli Democracy Index reveals that the public's assessment of Israel's current political situation and of the country's future is not significantly more negative than it was in 2011. As in the past, however, this year's figures point to considerable dissatisfaction, especially with the performance of Israeli politicians and political parties. Nonetheless, the degree of alienation from the political system is not profound enough to generate effective grass-roots pressure for revolutionary changes in government structures and processes.

The 2012 Index reveals that although the majority of Israelis (59%) feel that the government is not handling the country's challenges well, the vast majority (76%) remain optimistic about the country's future. The majority of both Jewish and Arab respondents feel that their ability to influence government policy is minimal or non-existent (62% and 69%, respectively), yet those who took part in the social protests of 2011 feel a stronger sense of belonging to the state than those who didn't. And while 75% of Israeli Arabs feel discriminated against, 45% of them still feel pride in being Israeli.