As Jews the world over sit in the temporary houses of Sukkot, Rabbi Dr. Benjamin Lau, head of IDI's Human Rights and Judaism in Action project, presents homes in the community for people with mental disabilities as a Jewish imperative the year round. 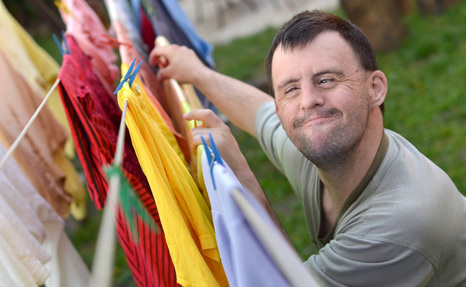 Rabbi Dr. Benjamin Lau's activities as part of IDI's
Human Rights and Judaism in Action Project
are supported by
The Ruderman Family Foundation

ty's attitude toward people with mental disabilities. A hundred years ago, most people with mental disabilities lived in large, segregated settings called "institutions for the mentally retarded," "lunatic asylums," "hospitals for the insane," and the like. The exclusion of these people from mainstream society was intended to protect public life and to distance those who might disturb society's equilibrium by being "different."

In recent decades, the inclusion of people with disabilities in the community—among them people with mental disabilities—has increased significantly. As a first step, smaller facilities were established as an alternative to large institutions, in order to provide more private and personal care.

The next step was the establishment of apartments in the community, each with a small number of people. These group homes are an expression of society's desire to include all people, regardless of their abilities. The transition to such residential settings, however, is not easy and raises strong feelings on both sides. On the one hand, people often have a primal fear of the "Other," and oppose group homes in their neighborhoods. On the other hand, there is the need to protect the residents of these apartments from too much independence, which may destabilize them. In addition, the families of people with mental disabilities may feel that institutions protect their loved ones and ensure their welfare and best interests; ironically, they may see the transition to an apartment in the community as another step in society's abdication of responsibility for people with disabilities, rather than as an assumption of more responsibility.

At this point we turn to the language of Jewish ethics, and two essential concepts in Jewish thought.

The combination of these two fundamental principles of Jewish ethics—mutual responsibility and the uniqueness of every person created in the image of God—leads to a conclusion that the systems that organize and manage Israeli public life (the state, the municipality, and the community) must provide for the well-being of each and every individual. Each person is entitled to realize their uniqueness, including people with mental disabilities. Every society must enable them to realize their uniqueness, while protecting the rights of the majority alongside the rights of individuals.

The transition to homes in the community must be implemented according to these guidelines. We must free individuals from closed, segregated institutions as much as possible. We must include as many different and diverse people as possible in "regular" communities. And when we do, we must protect the safety and welfare of people with disabilities, making sure that they do not fall victim to the trend toward independence and are not left to fend for themselves in the name of independence and self-sufficiency.

Rabbi Dr. Benjamin (Benny) Lau, rabbi of the Ramban Synagogue in Jerusalem, is a research fellow at IDI, where he heads the project Human Rights and Judaism in Action. His activities at IDI are supported by The Ruderman Family Foundation.

A Hebrew version of this article was originally published on the Ynet website on July 28, 2013.