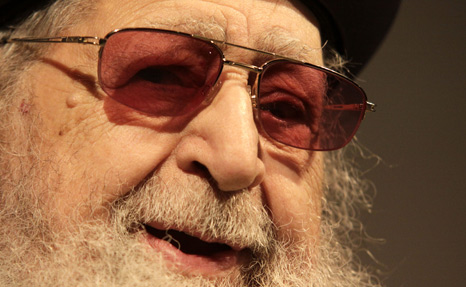 "The angels have overpowered the mortals and the Holy Ark has been captured." [The cry of Bar Kappara, when he discovered that Rabbi Yehuda Hanasi had died.]

The death of our rabbi and mentor Rabbi Ovadia Yosef marks the end of an era.

During the last 15 years, I was privileged to become acquainted firsthand with the teachings of Rav Ovadia. I was also privileged to receive his enthusiastic blessing for my book From 'Maran' to 'Maran': The Halachic Philosophy of Rav Ovadia Yossef. The use of the term 'Maran'—the term used by Sephardic Jews for a great rabbi and mentor—in the book title reflects my thoughts about Rav Ovadia and his place in the history of Jewish law throughout the ages. If Maran Rabbi Yosef Caro (the author of the Code of Jewish Law) was the first of the Achronim (the later authorities), then Maran Rabbi Ovadia Yosef was the last of the Achronim.

His generation still has a kind of hegemony. The departure of Rav Ovadia, marks the end of hundreds of years of halachic creativity by great individuals. His books will stand alongside the writings of all of the halakhic authorities of the last generations; he will take his place as an equal among equals, among those who devoted themselves to "fighting the battle of Torah" and bequeathing its treasures to future generations.

At this moment, a picture comes to my mind—one that I pray I can pass on to the next generation.

The place: The home of Rabbi Ovadia Yosef on Hakablan Street in the Har Nof neighborhood of Jerusalem. The time: An afternoon in the year 2000. Rav Ovadia gets up from his afternoon nap, while I am waiting for another hour of guidance on the work that I have written about his teachings. In those days, I was fortunate to find favor in the eyes of all the members of his household. His daughter-in-law Yehudit, who was entrusted with his wellbeing and privacy, opened the door for me. The house was quiet and calm. Rav Ovadia came in from his bedroom and sat down in his chair.

Suddenly, there was a great commotion. Dozens of members of a family from a city in the South poured into the room. They crowded in and stood there with great excitement. I didn't understand what all the fuss was about, until Rav Ovadia's assistant, Zvi Hakak, explained the situation:

That morning, Rav Ovadia had decided the family's fate. The family matriarch, a woman of about 80, had immigrated to Israel from France as a widow from World War II. Here in Israel, she remarried and built a large tribe that was a source of pride and joy—a family of children and grandchildren who engaged in Torah study and work; a family that was known for its admirable values and acts of kindness.

Suddenly, it emerged that the evidence that the woman's first husband had died during the war was unfounded; the "dead man himself had appeared." A scenario that seemingly could only exist in Agnon's story "And the Crooked Shall be Made Straight" was actually happening here in Israel. Following this revelation, all of the woman's children and descendants were considered to have the status of "mamzer" according to Jewish law, as they were born of forbidden relations. A terrible tragedy.

Rav Ovadia plunged into the thick of it, and after an intense process of inquiry and investigation that involved hearing testimony and cross-checking information, he liberated the family from their forbidden status. (This is not the place to describe how he freed them and the nature of their liberation from the status.)

Now the family had come to thank Rav Ovadia. They enveloped him with tears. There wasn't a single dry eye in the room.

And here is where my story begins:

After they left, I remained with Rav Ovadia in the quite room. He held my hand and said in his soft words: "Feel my hand—it is wet, wet. Did you see their tears? Did you see the tears of the oppressed?"

And then, without any preparation, he raised his voice and said, paraphrasing a passage from Midrash Vayikra Rabbah (32:8). in which God undertakes to comfort oppressed people who cry and have no one to console them:

"I saw the tears of the oppressed" – These are the mamzerim.

Who oppressed these people? The Sanhedrin, which judged them strictly by the laws of the Torah.

It was a rare moment. A once in a lifetime experience. I was holding the hand of a man who felt, with all his being, the responsibility for those people who could be sentenced to a life of Gehinnom by the law of the Torah, when he was drawing on his sense of responsibility and intensity and was undertaking to be their protector and aid.

This was the man, and this is his legacy. May his soul find rest and be bound up in the bond of eternal life.

Rabbi Dr. Benjamin (Benny) Lau, rabbi of the Ramban Synagogue in Jerusalem, is a research fellow at IDI, where he heads the project Human Rights and Judaism in Action. His activities at IDI are supported by The Ruderman Family Foundation.

This article was originally published in Hebrew on Rabbi Lau's Facebook page soon after the passing of Rabbi Yosef.

"I Will Stand on My Watch to Restore the Crown to its Former Glory" by Benjamin Lau, published in The Challenge of Sovereignty, edited by Mordechai Bar-On (Yad Yitzhak Ben Zvi, 1999). Hebrew.

IDI thanks Yad Yitzhak Ben Zvi for allowing us to make this article available to our readers.